I had always known there was something different about me, but that was the day I first recognized it to be dangerous. It was also the day, as I stumbled out of the shed into a long violet dusk, that I looked to the trees’ edge and saw my first wolf, and it saw me.

They’re more dangerous than we are.”
“Are they?” I ask. “They are wilder, certainly.”
“Isn’t it the same?”
“I don’t think so. I think it’s civilization makes us violent. We infect each other.”

Inti Flynn had always had a feel for nature. Her father had been a woodsman, first working for a lumber company, then, later, living a mostly solo subsistence life, in Canada, trying his best not to contribute to the global demise. He taught Inti and her twin, Aggie, about how to live in and with the wild. Their mother, a detective in Australia, was more concerned with teaching them how to contend with the wild in civilization. There is a lot in here about parents, of both the human and lupine persuasion, teaching children or pups how to cope in the world, how to defend against predators. The human sorts offer different approaches, some counseling firm defenses, others advising understanding, and some resorting to extreme kinetic measures. There are plenty of parents teaching questionable lessons. Dad used to tell me that my greatest gift was that I could get inside the skin of another human. That I could feel what nobody else could, the life of another, really feel it and roll around in it. That the body knows a great deal and I have the miraculous ability to know more than one body. The astonishing cleverness of nature. He also taught us that compassion was the most important thing we could learn. If someone hurt us, we needed only empathy, and forgiveness would be easy.

Inti’s gift is not metaphorical. Her ability to experience what others feel, gives her a unique advantage in understanding both wildlife and people. It also makes her very vulnerable.

I am unlike most people. I move through life in a different way, with an entirely unique understanding of touch. Before I knew its name I knew this. To make sense of it, it is called a neurological condition. Mirror-touch synesthesia. My brain re-creates the sensory experiences of living creatures, of all people and even sometimes animals; if I see it I feel it, and for just a moment I am them, we are one and their pain or pleasure is my own. It can seem like magic and for a long time I thought it was, but really it’s not so far removed from how other brains behave: the physiological response to witnessing someone’s pain is a cringe, a recoil, a wince. We are hardwired for empathy. Once upon a time I took delight in feeling what others felt. Now the constant stream of sensory information exhausts me. Now I’d give anything to be cut free.

McConaghy’s prior novel, Migrations, looked at the demise of wildlife (birds in particular, and even more particularly terns) in a slightly future world. In this one, she continues her interest in the impact of people on the natural environment. Officially, the last wolf in Scotland was killed in 1680. There are reports of wolves being seen as late as 1888, but Scotland has been essentially wolf-free for well over three centuries. Sadly for Scottish woodlands, it has not been farmer, sheep, or climate-change-free. Part of the problem is that the local deer population tends to linger in place long enough to lay waste to new shoots. A great way to keep them moving is to reintroduce wolves. Good for the goal of restoring natural forest, re-wilding at least part of Scotland is good for the health of the deer population as well. Thus, Inti’s presence. She is leading a team charged with re-introducing a small population of wolves to a remote part of Scotland, near the Cairngorms, a mountainous area in the highlands. 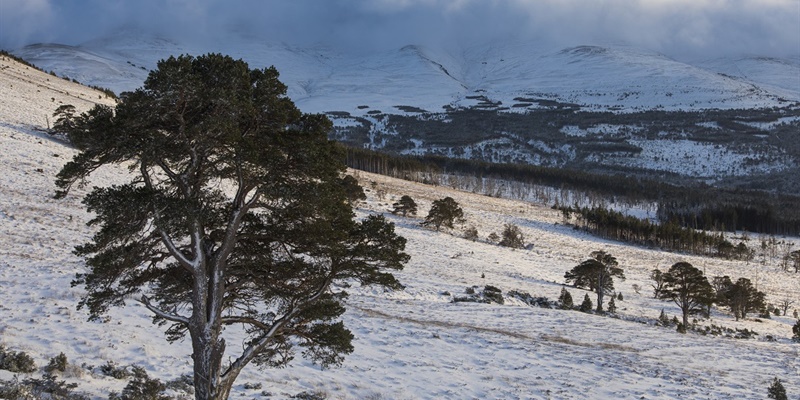 As one might imagine, there is considerable resistance among farmers concerned about the potential loss of livestock. The minimal-to-non-existent actual danger to humans is played up by those opposed to the reintroduction. Battle lines are drawn. The program has official sanction, but the locals have guns, and itchy fingers. And then someone goes missing. Inti’s primary concern is with the danger to the program, as she expects her wolves to be blamed.

The mystery for us is why, and how this person vanished. After a meet-cute early in the book, Inti and the local sheriff, Duncan MacTavish, team up, in a way, to try figuring out what happened. There are other mysteries as well, albeit of a different sort. What happened to Inti’s sister that had left her so damaged? Is Duncan trustworthy? The book alternates between the present and looking back at two periods in Inti’s and Aggie’s lives, with their father in British Columbia, where they learned how to live off the land, and as adults, when Inti was working on a wolf project in Alaska. Red deer are Scotland’s largest surviving, native, wild land mammal. It’s estimated that there are 400,000 of them in the Scottish Highlands – image and text from Good Nature Travel

Inti struggles with her desire to protect her wolves, and her need to engage with the locals as something other than as a know-it-all outsider. The complexity of the town’s social relations is quite fascinating. Duncan is our eyes on this, and a big help to Inti, knowing so well the people in the community in which he had grown up, understanding motivations, relationships, and local history much better than any outsider could.

Abuse is a central issue, in both the Old and the New World, whether at the hands of the distraught, the damaged, or the downright evil. Multiple characters in Scotland come from homes in which there was violence, whether against spouses, children, or both. It is clear that one of the locals has beaten his wife. Other instances of family violence are important to the story. The abuse that does take place is mostly done off-screen, reported, but not seen first-hand. Inti’s attempt at restoring the Scottish landscape, of giving new opportunities to a much-reviled species mirrors her attempt to heal, to restore the vitality of her own family. A wealthy landowner in Scotland is hoping to bring wolves from Sweden to the Scottish Highlands to thin the herd of red deer. – image and text from Good Nature Travel

One can probably make too much of it (I am sure I did), but I found it fun to look at the wolves for indications of comparison to the human characters. Was Inti like Six (the wolves are given numbers not names, for the most part). Who might be lone wolves? Who is fiercest in protecting their pack/family? Who are the alphas?

There is much resonance with Migrations. Both leads are working far from home. Both are trying to do something to help in a world that seems set against accepting any. Although she has her sister with her in Wolves, Inti is primarily a solo actor. She finds a family of a sort with charming, and not-so-charming locals, in the way that Franny Stone in Migrations teamed up with the fishing boat crew. Like Franny, Inti bears the burden of deep, traumatic family secrets. Like Franny, she is trying to find her true home, whether that be in Scotland, Canada, Australia, or maybe wherever the wolves are. Inti has a near-magical power of sensitivity. Franny had special abilities in the water. Like Franny, Inti teams up with a guy in a position of some power. In Migrations it was Ennis Malone, captain of a fishing boat. Here it is Duncan McTavish, the local sheriff. In both novels McConaghy shows the concerns of those imperiled by the front lines of attempts to correct a bad ecological situation. Of the two, this novel struck me as a bit more optimistic about the possibilities of making meaningful change.

In the real world, wolves have not been officially introduced back into Scotland, but there is one wealthy individual who is looking at doing so in a limited way. Who knows? Maybe the re-wilding of Scotland is not entirely a pipe dream.

Once There Were Wolves offers a close look at the issues involved in programs of this sort. The locals are accorded plenty of respect for and insight into their legitimate concerns, as we get to see past the rejectionist veneer. Very hard choices must be made, and the decision-making is very adult. Inti is a tough young woman with a challenging responsibility. It is easy to care about what happens to her. McConaghy keeps the action flowing, so there is no danger of losing interest. The main mystery is very intriguing and the final explanation is twisty and wonderful, with Inti finding her inner Miss Marple to sleuth her way to the truth. Once you sink your canines into this one, you will not want to let go. There are hankie moments as well. Tears will be shed. Set in a wintry place, it seems an ideal book to cool off with in the hot summer months. (Of course, if you read this in cooler months, it is distinctly possible that you will be wearing some wool, and thus will be reading a book about wolves while in sheep’s clothing. Just sayin’.) It seems appropriate to keep a modest supply of whiskey near to hand, just for ambience, of course. Or for those of the teetotaler persuasion, maybe some Irn-Bru. As for the best place in which to read this book, and read it you should, that should be obvious, in a den.

There is violence in me, in my hands, which vibrate with the need to exert some kind of control, some defiance, and if it is revenge for the things that have been taken from me then fine, I will have that too. I am done with falling prey. I will be predator, at last. I will forget the walls and the self-protection and I will become the thing I hunt and feel it all.

I received an E-ARE of OTWW in return for a fair review. Thanks to Amelia at Flatiron, to NetGalley for hosting the book and to MC for facilitating.

Interviews
Interviews with CM re this book have been as tough to find as Scottish wolves, but I did unearth an oldie, from 2014. I am sure after the book is released there will be more interviews available. There are several interview links in my review of Migrations
—–AusRom Today – AUTHOR SPOTLIGHT: Charlotte McConaghy – from 2014 – this relates to her very early, romantic fantasy writing

Items of Interest
—–Sea Wolves – Panthalassa.Org – mentioned in Chapter 8
—–Good Nature Travel – Bringing Wolves Back to Scotland by Candace Gaukel Andrews
—–The Guardian – Stories to save the world: the new wave of climate fiction by Claire Armitstead
—–Wiki on mirror touch synesthesia – yes, this is a real thing
—–Travel Medium – Why Are There No Trees in Scotland? by Paul McDougal – this is a wonderful overview of how Scotland lost so much of its woodlands over the last 6,000 years
—–Public Domain Review – Werner’s Nomenclature of Colours – Inti’s father kept a copy for use in his work – Chapter 3
—–The Guardian – Rewilding: should we bring the lynx back to Britain? by Phoebe Weston – 8/16/21 – One proposed re-wilding site is the same one used in this book