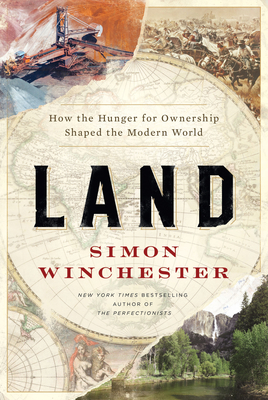 This we know: the earth does not belong to man, man belongs to the earth. All things are connected like the blood that unites us all. Man did not weave the web of life, he is merely a strand in it. Whatever he does to the web, he does to himself. – from Chief Sealth’s letter to President Pierce on a treaty giving much of what is now Washington state over for white settlement

What are the three most important things in real estate? All together now, “Location, location, location.” Simon Winchester, in his usual way, has offered us a grand tour of land, and thus real estate on our planet. Note the subtitle, How the Hunger for Ownership Shaped the Modern World). This is not the broker’s walk-through in which the good elements are highlighted while the less appealing aspects are minimized or ignored. It may be that location is the most important property of land, but there are other features that are worth knowing too. Things like How much land is there? How do we know? How was it measured, by whom, and why? Is the amount of land fixed? Can it increase or decrease? Can land be made unusable? Where is everything? Who can make use of it? Is land inherently public, for (reasonable) use by all? Was it ever? How did it come to be private? How do different cultures think about land? Why is land divided up the way it is, into public and private, into parcels of particular size? Who gets to own land, and who is relegated to merely renting it? Winchester has answers.

Land is the defining characteristic of every nation. Our (the USA’s) national anthem, for example, goes “O’er the land of the free” not o’er the pond, lake, river or fjord of the free, (and no, Norway’s anthem makes no specific mention of fjords), not the sweet air of the free, not the great views of the free (although “spacious skies” and “purple mountain majesties” from our other national anthem, America the Beautiful, comes close), but the land. Check your nation of choice for common ground re this. (Click for a list of anthems) The word “land” figures prominently. Although I suggest you check out the Algerian lyrics. Dude, switch to decaf. The war is over.

Land is seminal in human culture as well as national history. For many of us in the West, our very origin story begins with a landlord-tenant dispute. “If we owned the garden instead of renting it, Adam, I could have eaten the goddam apple and it would have been nobody’s business but my own. And we wouldn’t have to put up with the creepy landlord spying on us all the time, or his freaky feathered bouncer. The guy should get a hobby, make some friends or something.” 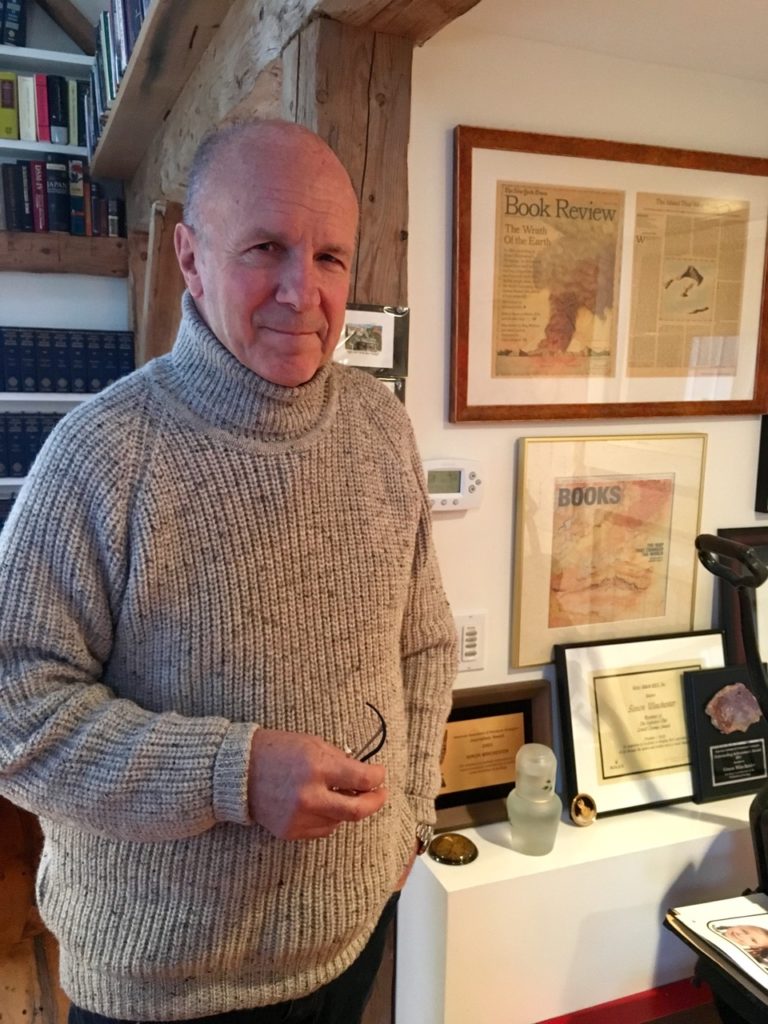 Simon Winchester at home in his study in the Berkshires – image from The Berkshire Eagle – Photo: Andrew Blechman

This is the eighth Winchester I have read, of his fifteen non-fiction books (so, plenty left to get to) and they have all been engaging, informative, and charming. He read Geology at Oxford, so, has a particular soft spot for explaining how physical things on our planet came to be where they are, how they changed over time, and why they exist in the forms they have taken on. You might be interested in the Atlantic Ocean, maybe the Pacific? Winchester has written a book on each. How about looking at the creation of the world’s first geological map, or maybe why Krakatoa blew its top. He is also interested in tracing back how we know what we know, (or, um, history) as a crucial element of understanding things as they are now, and how they came to be. The Perfectionists looks at how industrial standardization developed, and how machine tolerances improved to the point where they are beyond the control of flesh and blood humans. In The Professor and the Madman he looks at how the Oxford English Dictionary was made. The third element in Winchester’s trifecta of interest is people, often odd personalities who played pivotal roles in the development of technical and intellectual advances, thus expanding and deepening human understanding of the world.

I think what I’ve done is to get obscure figures from history and tell the stories like I’ve told you about Mister Penck and his maps, Mister Struve and his survey, Mister Radcliffe and his line, and turn them into what they truly are, which is heroic, forgotten figures from history….I just become fascinated by these characters. – from the Kinukinaya interview

There are plenty of interesting sorts in Land. Maybe none of the folks noted here are quite so interesting as the institutionalized murderer in The Professor and the Madman, but they are still a colorful crew, and it is clear Winchester had fun writing about them. They include Cornelius Lely, who built the 20-mile-long Barrier Dam in The Netherlands, which turned the Zuider Zee into vast tracts of arable land, Gina Rinehart, the world’s largest private landholder, not someone who has contributed nearly so much to the store of human knowledge as she has to conservative politicians, and Friedrich Wilhelm Georg von Struve, who spent forty years measuring a meridian for the tsar of Russia. There are many more, of both the benign and dark variety.

There are surprising connections made, such as the relationship between the invention of barbed wire and America’s appetite for beef. Or the link between the growth of commercial aviation and the development of World Aeronautical Charts, well maybe not so surprising, that. But that such things did not exist prior to people flying the friendly skies reminds us just how recent so much of the foundation of today’s world truly is. I suppose it also might not count as surprising, but John Maynard Keynes had an interesting solution to the problem of landed gentry, euthanasia.

Winchester details many of the outrages that have been inflicted, in the name of seizing land, on indigenous people across the planet, Australia, New Zealand, and the USA figuring large in these. But there are also plenty of other people who have been expelled from their homes, livelihoods, and history by the forces of greed across the planet. These include immigrants to the USA whose land was stolen while they were illegally incarcerated, and farmers who were dispossessed by land-owners seeking to maximize the profitability of their holdings, via the Enclosure and Clearance laws passed in England and Scotland. Then there are the perennial turf battles, like those in Ireland and the Middle East.

Gripes are, per usual with any Winchester book, minimal. He writes about the role, historical, current, and potential, that trusts have, had, and might have for the preservation of land from destructive exploitation. Yet, in doing so, there was no mention of The Nature Conservancy. Their motto could be (it isn’t) We save land the old-fashioned way. We buy it. It has over a million members (yes, I am) and has protected about 120 million acres of land. It definitely merited a shoutout here. Another part of the book tells of the annihilation of bison from the American west. The critters are referred to as multi-ton. Like the mythical eight hundred pound gorilla which grows only to about 400 pounds at most, bison max out at roughly 2,000 pounds, or a single ton, which still leaves them as the largest land mammal in North America.

Like any good geologist, or writer, Simon Winchester enjoys digging. And we are all the lucky recipients of the informational nuggets he unearths. He is a master story-teller, and if you are ever fortunate enough to find yourself at a party with him, or find a chance to see him speak publicly, just pull up a seat and listen. You won’t be sorry.

So, I can tell from the looks on your faces that this one would be a perfect fit for you, particularly if you are planning to start a library soon. Do you think you’d like to make an offer on the book? There are other potential buyers stopping by this afternoon, and I would hate for you to miss out. It won’t stay on the shelves very long. Take my card and give me a ring when you make up your mind, ok. But I can assure you that, whether your preferences for land are LaLa, Never, Sugar, Holy, Promised, Wonder, Native, or Rover, when you check out Simon Winchester’s latest book, you will be a Land lover.

We abuse land because we see it as a commodity belonging to us. When we see land as a community to which we belong, we may begin to use it with love and respect. – Aldo Leopold, A Sand County Almanac (1948)

I could say that Winchester covered a lot of ground in this book, but really who would write such a thing? I suppose one might say that he planted a flag on his subject matter and claimed it for his own, and if you don’t like it, you can get the hell off his lawn. Not me. Nope. Nosiree.

An extra bit. I had intended to incorporate the following into the body of the review, but just felt off about that. Nevertheless I do hold with the notion expressed, so here it is, tucked away at the bottom:

I was taken with a particular instance of the horrors that accompanied land grabs in the expanding USA, as having resonance with today, with Donald Trump as the embodiment of that carnage. Whereas the racist yahoos of the 19th century westward expansion delighted in slaughtering bison from a moving train, in order to deny the native residents a living and to make it easier to clear them from desired land, so Trump has spent his time in the limelight, and in power, blasting away at the things that are central to our culture, to our values, so that he could deny us our cultural and legal core, as he seized all he could grab for himself and those like him.