The world stops for you when you’re pretty. That’s why women spend billions on crap for their faces. Their whole life, they’re the center of attention. People want to be around them just because they’re attractive. Their jokes are funnier. Their lives are better.

Well, there might be some downsides. Pretty Girls is a white-knuckle thriller that will keep you turning the pages long after you should really have gone to sleep. Do not read this while on a train. You will miss your stop.

The story is told from three alternating perspectives. Claire Scott, newly free of that nasty ankle-monitor, has a pretty good life. 38, in great shape, no kids, a studly, attentive hubby who makes much more than a decent living, cool digs. What’s not to like? After a celebratory dinner out, Paul wants to do the nasty in an adjacent alley, way out of character, but, whatever. But sorry, no nookie for you guys. An armed, tattooed criminal element sort robs them. Things go too far and Paul winds up on the sidewalk, tinting the pavement with considerable quantities of red, and the game is afoot. What Claire discovers in going through her late mate’s computer files after the funeral will rock her world.

Lydia Delgado’s life is somewhat different. Single mother, 41, struggling to get by, alienated from most of her family, runs a dog grooming business. Her past would not look very nice on a resume. She’d hit rock bottom a while back and lived there for a spell, with a pick and shovel. But these days she is respectable. Owns a dog-grooming business. Met her pretty nice bf in a 12-step program. Her teenage daughter is a peach. Lydia is on the wrong side of pudge these days, with an addiction to the sort of culinary drugs that come in crinkly bags at supermarkets. Life’s a bitch and then you diet. Lydia used to be a looker. Not surprising, really. Her sisters were easy on the eyes too, but one vanished when she was 19, never to be seen again, and the other one just saw her husband get killed.

Sam is a determined sort, bulldog with a bone. He never believed the official cop line that his Julia had simply run away. So he dedicated his life to finding out what had really happened to his eldest daughter. It cost him his marriage, and maybe even more. We see the progress of Sam’s investigation through his journals, from the time when he was on this quest. Claire and Lydia’s adventure takes place today.

The two sisters join forces to continue searching for the truth about Julia’s disappearance, and must face the consequences of Claire learning some very disturbing secrets about her husband. 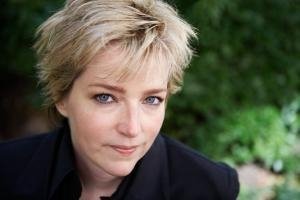 Karin Slaughter – from her FB pages

Karin Slaughter is not new to the best-seller lists, having sold more than 30 million copies of her crime books books in 32 languages. She was born in a small Georgia town and now lives in Atlanta, where Pretty Girls is set. Her books include six in the Grant County series and nine in the Will Trent series, set in Atlanta. She was working on another book entirely when the notion for this one occurred to her in dream, so she checked in with her publisher, put the planned book on the back burner and dove into this one.

There are several elements at work here. In a book of this sort, if you are not engaged by the characters, the rest does not much matter. Lydia certainly has had her troubles in the past, but she is pretty supportable now, finding her best self in this worst of times. Claire makes us wonder how she could have buried her head in the sand for so long, ignoring what look like warning signs to us. But in wondering, it is worth keeping in mind that we are all sand-dwellers, from the neck up at least. Maybe it is an innate and useful skill to be able to simply ignore warning signs of peril. If we recognize them then we might have to do something about them, which entails personal risk, of either physical or emotional harm. Most of the time most of us prefer to keep a lid on things. Thus we live to ignore another day. So it feels entirely credible that reasonable people can overlook behavior that might stand out to an external observer. Particularly in Claire’s case, as she has tried to keep her head down in most situations for most of her life. We can see her vulnerability, however cloaked it may have been, and can easily feel for her. In addition we see the characters develop over the course of the tale, Claire moving from passive to assertive and Lydia moving from nobody to a sort of anti-hero. Family dynamics plays a major part in the sisters’ struggle, both to find the truth and to find a way back to sisterhood across a very large distance. Check.

The story must be engaging. Will Claire and Lydia find out what really happened to their missing sister? Does Sam? Do we care? If you can’t empathize with this as a driving force, it must be because you are too busy torturing kittens. Check.

Pace must be maintained. Slaughter must have a metronome that is set for increasing tempo. Check.

The baddie must be truly scary, and up to some really awful stuff. You have no idea. Check

The hero/heroine(s) must face believable peril. Is it possible that one or more of our core three might come to harm of the terminal sort? You betcha. Check

A thriller is never without a bit of misdirection, a few fish-hooks hoisting red-herrings for us to consider. Yep. Get your scaling tools ready. Check.

And there is that old favorite, the twist. Let’s just say that Chubby Checker would be pleased. Check. Wait, what’s that? My advisors inform me that not everyone will appreciate my lame boomer refs, so, fine, whatever. For you kids out there, ok, rewind. Start over. Twists. Let’s just say that after reading this book, I was in need of a good neck brace. Ok? Sheesh.

Finally there is the issue of payload. That is the extra information one learns about the world in reading a work of fiction. I suppose there is a bit of that here. I have no idea if the awfulness that is depicted in Pretty Girls (aside from Paul’s questionable taste in décor and labeling) has a real-world basis. Although it does seem that if one can imagine a particularly grotesque form of depravity, there is probably someone, somewhere who is practicing it right now, and with so many folks on the planet, probably more than a few. So if the book is highlighting some actual form of human awfulness, then bad-a-bing. Check

Gripes. You knew there would have to be one or two. The title, Pretty Girls suggests that those on the 10 side of life are more at risk than those closer to the 1 end of things. The theme of prettiness is noted with frequency early on, in comments on the attractiveness of some and the unattractiveness of others. Slaughter seems interested in giving some serious thought to how people react to beauty and to how the beautiful react to the world. Certainly there is peril about for those blessed with pleasing countenances, whether it comes from a wicked witch or the ravages of time. She keeps up the mentions for a while, sometimes offering actual insight. But then it seems to fade, as if she had run out of things to say about prettiness, until it is brought back into the spotlight for a final bow or two. Like, oh, the title is Pretty Girls. I guess I should put something in here to give that some closure. It looked totally like an afterthought. I thought this could have been better handled, maybe spread out a bit more, maybe dig a bit more than skin deep. But that is a quibble. No one is going to read this book to get enlightened about beauty. My second gripe will have to be a bit clouded. I don’t want to spoil anything. I found the particular fixation of the baddie on the specific group that is targeted curious. Why did this person focus on these targets? I did not get that there was a particular reason why the baddie was so set on this particular subset of victims. Perhaps the significance of this is in the eye of the beholder? But no matter, really.

The bottom line here is that you will be ripping through this book, dying (well, almost) to see how things turn out. Pretty Girls is an outstanding thriller, a very engaging, entertaining, and disturbing read, and that is a beautiful thing.

How serial killers choose their victims

A lovely audio interview with the author by Steve White of Literary Week. The sound levels are off a bit, his volume being too loud relative to hers, but it’s worth putting up with.

Offering a bit of further discomfort, after reading this book you might find some of these listens a bit disturbing

You are so Beautiful– Joe Cocker