Meet Me in Another Life by Catriona Silvey 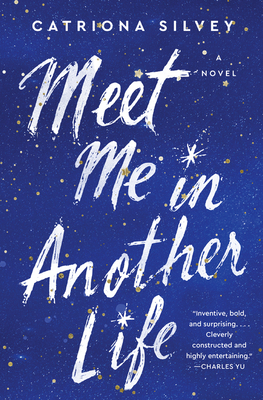 Santi steps closer as she holds the light up to the gears. ‘Think we can fix it?’
Thora puts her weight to one of the gears and tries to shove it backwards. ‘No,’ she says, after a few seconds. ‘I’m afraid time has stopped.’
Santi tries to push the gear in the other direction. Giving up, he steps back. ‘I guess it has.’ He smiles at her sideways in the flickering light. ‘Welcome to forever.’
It’s a pretentious thing to say. But Thora has to admit that’s exactly how this feels: a moment taken out of time, with no beginning or end.

Imagine you are looking at the screen in a large cinema. There are blips in the image, fleeting, but present. As the film moves on to the next scene, there are more blips, holes in the image, with another image, another, pentimento film, going on behind the up-front film. Another scene on the big screen, with more blip, until the characters in the front film, look at each other and say, “did you see that?” As they slowly become more and more aware that there is something going on in the film behind them, they turn and watch, and their behavior in the front film changes, to take account of the new knowledge. 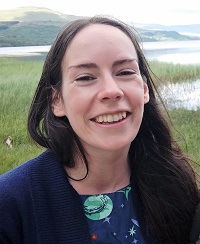 That is what reading Meet Me in Another Life is like. Thora and Santi (Santiago) find themselves in Cologne. (neither is a native) They meet cute, at first, anyway. Until, oopsy, soon after they meet, tragedy. It takes only a short time to know that these two have a special bond, one that will persist through life after life, as one or the other is gone by the end of each of the eighteen chapters, to be reunited in the next. Their ages vary in each iteration. In a few they are the same age. In some, one or the other is older, a little, more than a little, or maybe a lot. Their positions of authority vary as well, parent/child, teacher/student, cop/trainee, patient/caretaker, if there is any such hierarchical relationship between them. They have varying personal relationships, with each other (bf/gf, married, prospects), or he with Heloise, she with Jules. But their passion for learning, for exploration, for science binds them together.

It is clear to us early on that there is a mystery to be solved. Why the recurring lives? Why the disparate ages, roles, and relationships? After a time, it becomes clear to Thora and Santi, too. They begin to realize that they have known each other and remember things from their former lives. Also, there are some consistencies, some places and characters that recur, unchanged.

Recurring elements (Santi’s cat, a tattoo on Thora’s wrist) first gain meaning through repetition, and then become touchstones, triggering inferences for the reader about how the characters have changed and where they might be headed. Once Santi and Thora realize they are trapped in a loop, they (along with the reader) must piece together the clues scattered through the narrative to figure out what might really be going on. – from the LitHub article

The notion that sparked the book is very down to earth. But these are two characters who are reaching for the stars, and Silvey’s solution was very fantasy/sci-fi-ish.

…the question was: can two people ever know each other completely? That led me to the idea of characters who meet again and again in different versions of their lives…I think of the book as an argument: Thora and Santi have very different attitudes to their situation, and that leads them to respond to it in different ways. – from the Deborah Kalb interview

There are obvious similarities to other works that deal in re-iteration. Kate Atkinson’s Life After Life (when Thora refers to herself as the Fox to Santi’s Wolf, is that a nod to that book?) uses the method in consideration of England in the first half or the 20th Century, and looking at the possible branches life might take were one to choose A instead of B, or B instead of C, giving the available choices a go until a desirable path forward is found. Thora, in particular, and Santi try this out, but it is not enough to solve the puzzle. Cloud Atlas is another novel offering common characters in diverse times (and places. This one is all in Cologne). Groundhog Day is the most famous cinematic rom-com loop and Andy Samberg’s Palm Springs gave it a similar go in 2020. 50 First Dates anyone? There is a clear romantic element in this one, too, as Thora and Santi are souls who are clearly meant to be together, (Yeah, I know, some might see them as merely tethered. But my take is that there is greater depth to their connection.) despite the fact that Thora is bisexual and has major hots for a woman, Jules, in many of the stories. Santi and Thora are a couple in others.

Their divergent perspectives offer a fascinating core to their discussions. He is religious, believes in God, an afterlife, and that there is a reason for being, maybe a mission even. Life should make sense. He thinks if he can figure out what God wants of him they can step outside their seemingly endless repetitions. She is an atheist and is having none of that. They talk about faith, determinism, eternity, and plenty more that raises this above the level of a simple entertainment.

Santi has always trusted in fate: that there is one way thing have to go. He isn’t literal enough to believe that the future is written in the stars—he’s doing a PhD in astronomy, after all—but his memories of other skies still unsettle him. The idea that there are other possible configurations for the universe, that God could be running them all in parallel, cuts against everything he believes. The only way he can reconcile what he remembers is to think that it’s a message, one he’s not yet ready to understand. He watches the world like a detective, like a poet, waiting for the meaning to come clear.

Santi’s faith seems more in fate than in the divine, given his inability to allow for a deity capable of managing multiple universes. But the faith he has, of whatever sort, is put to the test, repeatedly.

They struggle to know themselves, as much as they try to understand each other.

”This’ll never work, you know,” she says conversationally.
Santi frowns at her. “Who says?”
“All my exes. Most recently, my ex-girlfriend Jules. She told me when we broke up what my problem is.”
“What’s your problem?”
“I always want somewhere else. I’m never just—content to be where I am.”
He shrugs. “Neither am I.”
She gives him a look. ”What do you mean? You’re, like, Mr Serenity.”
A smile cracks his face. “That may be what it looks like on the outside. But inside, I’m always searching…We’re the same that way.”

As in any good mystery, there are plenty of clues sprinkled throughout the eighteen stories. Making sense of them is the challenge for us readers as much as it is for Thora and Santi. I was only partly successful at sussing out what was going on, even with keeping an excel sheet to track differences and commonalities among the stories. (Don’t judge me!) This is a good thing. Of course, you may be a lot smarter than me and figure it all out early on. That would be too bad. Not knowing, trying to figure it out from the clues provided, was part of the fun.

None of this matters if we do not care about our two leads. Not to worry. While both characters have qualities that raise them well above average, they often find themselves in everyman (and woman) situations and pedestrian lives. Their clear bond with each other is almost a third lead, so strongly does this come across. You will definitely be rooting for them to figure out how to get off what seems an eternal hamster wheel. The novel is as engaging and enjoyable as it is intellectually stimulating.

My only gripe, and it is minor, is that there seemed a bit too much exposition. There is nothing wrong with exposition, but the telling/showing seesaw felt a bit too heavy on one end at times.

Are Thora and Santi two star-crossed lovers or is their connection made in heaven? Only the stars (and the author) know for sure. Allow yourself to be delighted. There is plenty here that can generate that feeling. You may forget about this review, this book, for a while, but I am fairly certain the book, preferably, will turn up again in your life. Try your best. It will be worth your time. Remember.

If God’s test were easy, it would be meaningless.

If you are looking for a SUMMER BOOK, this is my rec – no-holds-barred, #1 fab beach read, or anywhere read.

The film rights have been optioned by Atlas Entertainment and Pilot Wave, with Gal Gadot to produce and star. I spotted much news coverage of this that was, IMHO, wrong-headed, in portraying the book as an LGBTQ sci-fi novel. Thora is indeed bi-sexual, with more story time with female than male partners, but that is sooooo not what this book is about. We do know that once Hollywood gets its claws on a novel, the end product can diverge dramatically (or even melodramatically) from the source material. This initial coverage is not encouraging. But then, many film-rights options are never exercised. So we, who favor hewing as closely as possible to written source material, are a long way from having to fret over this.

Links to the author’s personal, GR, and Twitter pages, and her academic site (Silvey has a PhD in language evolution, and has published numerous papers)

I asked Silvey a question on the Ask The Author part of her GR page, to which she offered a response in very short order.

Q – How did your research on the evolution of language manifest in MMiAL?

A – That’s an interesting question! My honest answer is “not really”… I did realise after writing the book that there is a linguistically informed way of thinking about time loops, and why they might be appealing to a reader – I wrote about that in an essay on LitHub: https://lithub.com/on-the-counterintu&#8230; But if my experience as a researcher influenced the book at all during the writing, it might be in the way Thora and Santi’s situation mirrors the strange, lonely-together rootlessness of academics – people who are usually foreigners in the place they’re living, brought together by shared passions, using English as a lingua franca but often talking past each other.

Items of Interest from the author
—–Silvey’s site – Excerpt – Chapter 1 – Welcome To Forever
—–Crimereads – Excerpt – Chapter 8 – 115 – We Are Here
—–Lithub – On the Counterintuitive Appeal of the Literary Time Loop – in this article, linked in Silvey’s Q/A response above, she explains very clearly how time loop narratives work in a literary framework. This is MUST READ material!

One response to “Meet Me in Another Life by Catriona Silvey”