Mother May I by Joshilyn Jackson 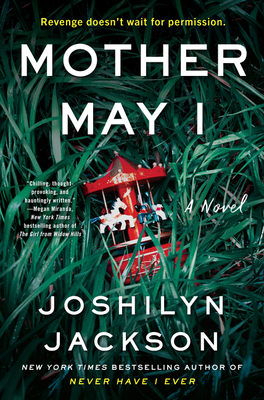 I woke up to see a witch peering in my bedroom window. She was little more than a dark shape with a predator’s hungry eyes, razor-wire skinny but somehow female, staring in through the partly open drapes. Sunrise lit up the thin, silvery hair that straggled out from under her hat. I should have leaped up screaming. I should have run at her with any weapon I could find. Instead I thought, I hope she’s not standing on my basil plants, hazy and unworried. Even half asleep, I knew that there was no such thing as witches. I’d long forgotten the most important thing the theater had ever taught me—that the human body can hold two truths at once. Even truths that seem to rule each other out: There’s no such things as witches, true. And I was looking at one.

Once upon a time is a familiar beginning. The Brothers Grimm (Jake and Willy) collected a trove of European folklore notable for, among other things, its dark content. Jackson was raised with those stories, (I always reference fairy tales in my books. Ever since I was a young child, I have been an avid reader. I like fairy tales, so I just put them in the stories. – from the No Apologies interview) maybe a bit more than most of us. She lends this part of herself to her desperate lead, with some added brio.

I’d been raised on Grimms’ fairy tales by a mother who saw the world as something huge and wild—carnivorous. Her world was full of witches.

And sometimes the darkness of life matches the depths of grim imagination. Soon after her first witch sighting, there is a second, at her daughters’ school. And all it takes is a momentary lapse of attention and her infant son, Robert, is snatched away. No changeling is left in his place, but there is a message. Follow my instructions to the letter, or else.

All my books, in some way or another, look with varying degrees of hope and cynicism at how far we can walk into the black and still be saved. What are the tiny lights that turn us and call us home, and why do some people see those faint, glowing calls, while others walk straight off the edge of the world and are lost? Many of my dearest people from my lost years are dead, or went into the prison system or disappeared. And me? I have this lovely life, much like Amy’s, where I go to book club, make lasagna and walk the dog. – from the Book Reporter interview

That certainly makes one wonder about Jackson’s wastrel past. The task she is forced to undertake has unexpected and horrifying results that threaten Bree Cabbat’s beautiful life. She had been born poor, but got a scholarship to college and then married well, securing an upper-middle-class utopia with a successful studly lawyer husband, three beautiful kids (well, for now anyway) a lovely home in a well-to-do neighborhood, and a satisfying community life. But, one wrong move and it could all vanish. How fragile life can be, no?

Poverty, class origins, the randomness of opportunity, the fragility of a happy life, all figure large in Jackson’s novels. Her previous novel, for example, Never Have I Ever, let us know that her lead, Amy, had done things that her family’s means were able to keep under wraps. But her comfortable life is threatened by a blackmailer who knows her big secret. In this one, Bree is stuck having to deal without even knowing what her nemesis is tormenting her about. Jax makes the point that for those with money or damn good luck it is possible to screw up and get a second chance, or a third, fourth and so on, while for those on the lower economic fringe, one mistake and your future becomes a hopeless, eternal present.

I serve on the board of a small non-profit, Reforming Arts (reformingarts.org.). We teach college-level liberal arts classes to people incarcerated in Georgia’s women’s prisons. I try to teach one semester a year, and so far, all my classes have been in the maximum security facility.
Our students are diverse in terms of age and race and orientation. The one thing they almost universally have in common is that they were raised in grinding poverty, often by disordered or abusive families. We punish the poor more quickly and more severely; sometimes it feels as if being poor is itself a crime. – from Book Reporter interview

A lot of the impetus for Jackson’s writing about mothers derives from her personal experience.

…motherhood was transformative for me…I felt I became a more dangerous animal once my heart was living and breathing and toddling around on little fat legs outside of me, out in the dangerous world. – from the Book Reporter interview

Here we have two mothers at war. One is seeking revenge for a long-ago wrong. Bree is willing to do whatever it takes to protect her baby. Both are in full-on Mama Grizzly mode, and find a sort-of empathy with each other, despite the ongoing horror. Their links are not just through their common concern as mothers, but in their common class background. This bond between enemies is a technique Jackson carries over from her prior novel, Never Have I Ever, in which Amy Whey and her blackmailer, Roux, find themselves to be strangely sympatico, well able to understand each other, while those around them seem not to get them.

Never… represented a redirection of sorts for Jackson, away from romantic comedy-drama. But even in the books she wrote prior to that there were often underlying crimes that drove the action. So the shift to writing thrillers was not really all that big a change. It has been, however, a very effective one. Mother May I is a can’t-stop-reading-page-turning-keep-you-up-all-night domestic thriller. Every time you think you can see the road ahead, there is the squealing of brakes hitting a hairpin curve too fast, and, with a sudden acceleration, you are speeding off in another direction. (Re the books she loves to read, Jackson says, My favorite kind is the first reversal just 25% into the book, then stays windy from there – from the Inside Flap interview) This book has more twists than a box of rotini.

A strong piece of this novel is Jackson’s use of her theatrical background to support her character’s actions and capabilities. She was a theater major in college, has done some acting and even reads audio books professionally, not just her own. She gives Bree her theater training, the better to allow her to lie in public, with her words and her body. That’s what actors do, right? It helps Bree in dire circumstances, but also in lesser ones.

There are several elements that appear in some or all of Jackson’s novels. Deep secrets figure large, whether our lead is looking to penetrate one or defend against one of theirs being exposed. Class and family resources, or lack of same, are frequently core elements. That is very much the case here. There is a duel between antagonists. Check. Redemption turns up a lot. In fact, in the Library Love Fest interview, Jackson refers to herself as “a redemption-obsessed novelist.” Her characters, certainly her lead characters, seem to be in persistent need of cleansing from the wrongs they have done. That is less the case for Bree in this book, per se, but the need for redemption is still a strong element. Jackson has a gift for ending her chapters with hooks that generate many a late night ”goddammit!” as readers know that they will not be able to go to sleep until they can read just one more chapter, and then just one more chapter, and then just one more chapter, and so on. There are usually adolescents involved, although in this novel, they play a secondary role. Jackson is also fond of portraying constructed families. As with the teens, that is here, but in a very small way. She also includes fairy tale elements (check) and says that there is a Stephen King reference in all her books (not telling). Readers familiar with her work will be more than satisfied with Mother May I, holding to the familiar themes and story elements while adding some newer, harder-edged moving parts. Readers new to her work are in for a great treat.

In her Inside Flap interview, Jackson was asked, “Is it one of your goals, to have us think as we read?” She said, “My goal is to write a book that you can pour yourself a giant Marguerita, go down to the beach, have a great time and never think again if you don’t want to. But, if you want to, it’s there for you…there’s those layers. This is a book about class…how class plays into what justice looks like.” Either way, it works quite well.

No one’s personal history is lily-white. Some witches are real; the past never forgets and needs only a little prompting to come after you, teeth-bared; happily ever after is for fairy tales, and sometimes not even there.

An aside. In the Book Reporter interview, Jackson said, “I’m working on a book called TWO TRUTHS AND A LIAR right now. The first line is: “The day my baby disappeared, I woke up to see a witch peering in my bedroom window.” I am not sure why the title changed, but I expect that opening line was thought to give away too much too soon. The baby is not swiped until chapter 2 in the final version.