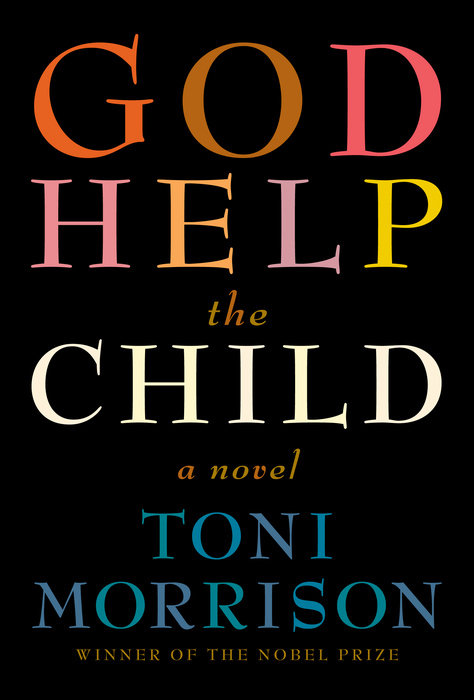 No lonesome wandering child with a fishing pole passed by and glanced at the adults in the dusty gray car. But if one had, he or she might have noticed the pronounced smiles of the couple, how dreamy their eyes were, but would not care a bit what caused that shine of happiness.
A child. New life. Immune to evil or illness, protected from kidnap, beatings, rape, racism, insult, hurt, self-loathing, abandonment. Error-free. All goodness. Minus wrath.
So they believe.

The children in Toni Morrison’s novel can use all the help they can get, whether from God or some other source. Lula Ann Bridewell was not what her high-yellow parents had expected:

She was so black she scared me. Midnight black, Sudanese black…Ain’t nobody in my family anywhere near that color…I hate to say it, but from the very beginning in the maternity ward, Lula Ann embarrassed me.

While she may be a successful cosmetics pro, beautiful, successful, rising in the world, we meet the adult Lula Ann, who has erased the rest of her name and now calls herself by the mononym “Bride,” as she is unceremoniously dumped by her boyfriend, The One, Booker Starbern, who announces, “You’re not the woman I want,” before exiting to the percussive accompaniment of a slammed door. How this came to be, and Bride’s quest to figure out why it did, provide the foundation to which the rest of the narrative elements are added.

Bride has a bit of a tough go, as her appreciation for people and relationships is only skin deep. She tells of her Diet Coke-like sex life, “deceptively sweet minus nutrition.” She tries to blow off her dumping,

Well, anyway it was nothing like those double-page spreads in fashion magazines, you know, couples standing half-naked in surf, looking so fierce and downright mean, their sexuality like lightning and the sky going dark to show off the shine of their skin. I love those ads. But our affair didn’t even measure up to any old R-&-B song-some tune with a beat to generate fever.

but fails at that. In fact the departure of Booker sparks a physical demise for Bride, well, a magical-realist retreat that no one else seems to see, as she progressively devolves back to a child, losing her ear-piercings, pubic hair, weight, sense of taste, menstrual cycle and breasts. 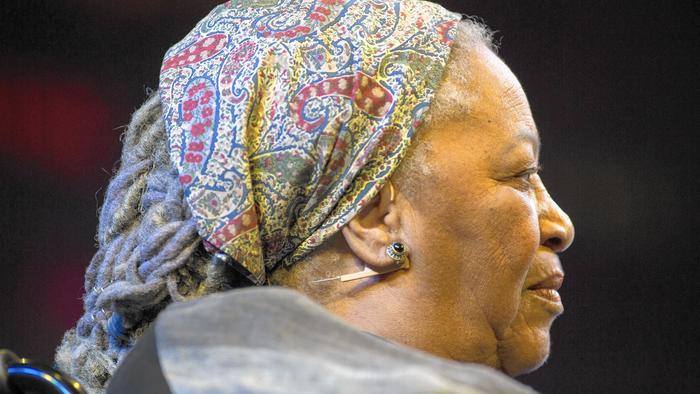 Toni Morrison – from The LA Times

Bride’s erstwhile, and very secretive bf, Booker, has issues of his own. (He especially liked her lack of interest in his personal life.) Where Bride is totally focused on the surface of things, Booker, who plays jazz, hides behind his intellect, applying himself to the study of the root of all evil, but never really freeing himself to become an entire person. He carries a burden of rage from his childhood that keeps him from being his own person. Only if Bride and Booker can build themselves up to actual three dimensional people, by looking beyond their own skins to consider the feelings of others, can they have any hope of anything more from life than ephemeral pleasures. Only then can they truly connect.

Much of God Help the Child focuses on children, how they are treated, the long-term impact of that treatment, on themselves and on others. Childhood here is a particularly fraught state. Lula Ann (Bride) is almost shunned by her own mother, who won’t even allow her to call her “Mama,” insisting that she call her “Sweetness” instead, lest people on the street know for sure that someone that dark came from someone that light. As a child she witnesses an act of child abuse. Another character loses a relation to a child abuser, and encounters a school-yard flasher as an adult. Bride had falsely testified against an allegedly abusive teacher, done to gain at least some acceptance from her mother, so children are capable of inflicting harm as well as receiving it. Another child was prostituted by her mother, and a serial abuser, “the nicest man in the world,” is reported to have preyed on many. One might be inclined to wonder a bit at the Cabot Cove-like concentration of awfulness on display here, even if much of it is by reference.

Thematically, there is a lot in here about erasure, not only Bride’s Richard Matheson-reminiscent fairy tale reduction, some of it involving what appears to be a magic razor, Sweetness erasing Lula Ann as much as possible, Sofia, the convicted molester, doing her best to erase Bride from her life, as Bride had attempted to erase her guilt for what she had done, and it can be no accident that Bride is the designer of cosmetics, and even thinks about people in terms of how the right makeup can erase their flaws.

The pages are damp with mentions of precipitation. It rains on Bride the day after Booker leaves. Booker is rained on when he leaves a family gathering in a huff. A child of a prostitute is found while on the street in the rain, and rain moistens one of the most beautiful passages in the book, as Booker celebrates seeing his Galatea for the first time:

The sun still blazed so the raindrops falling from the baby-blue sky were like crystal breaking into specks of light on the pavement. He decided to play his trumpet alone in the rain anyway, knowing that no pedestrians would stop to listen; rather they closed umbrellas as they rushed down the stairs to the trains. Still in thrall to the sheer beauty of the girl he had seen, he put the trumpet to his lips. What emerged was music he had never played before. Low, muted tones held long, too long as the strains floated through drops of rain.

There are plenty more passages that ripple with poetic feeling. And there are some subsidiary characters who brighten up the scene. A fifty-something hippie couple seemed like magical forest dwellers, an epitome of innocence and goodness, with maybe a touch of Tom Bombadil and even Bjorn the Berserker. Booker’s aunt, Queen, is a delight, vivacious, colorful, and very interesting, worthy of an entire book just on her alone. The rescued daughter of a prostitute is fascinating as well.

God Help the Child is a rarity, in that it is a Toni Morrison novel set in the present. Her eleventh novel is a spare one, at 177 pages, similar in girth to Morrison’s previous novels, Home, which weighed in a very novella-like 147 pages and A Mercy, another slim volume, at 167 pages. Not that Morrison is given to producing tomes, but her books these days seem on the thin side. A larger frame might have allowed her a bit more space in which to give us a bit more. I am reminded, though, of Lincoln’s response when asked about the proper length of a man’s legs, he said “they ought to be long enough to reach from his body to the ground.” I expect that the proper size of a Toni Morrison story is the number of pages she needs to say what she has to say. She has said she is, “writing less in order to say more.” A little Toni Morrison goes a long way.

The author is in her 80s now. While God may have been asleep as the wheel when most of the children in this tale suffered what they suffered, maybe God can help the author, at something she is most definitely inclined to do, keep writing until her last breath, and help push that day far off into the future. In this way God will also be helping the reader .

You will need no assistance enjoying God Help the Child. While I would not rank it with her recognized classics, like Sula and Beloved, even a lesser Toni Morrison book is better than most of what is out there.

One response to “God Help the Child by Toni Morrison”