The Plot by by Jean Hanff Korelitz 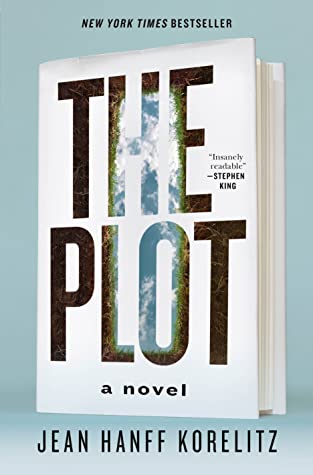 …a few minutes later in the car, he found the first of the messages. It had been forwarded from the contact form on his own author website (Thanks for visiting my page! Have a question or a comment about my work? Please use the form!) just around the time as he was about to go on the air with local Seattle institution Randy Johnson, and it had already been sitting there in his own email in-box for about ninety radioactive minutes. Reading it now made every good thing of that morning, not to speak of the last year of Jake’s life, instantly fall from him and land in a horrible, reverberating crack. Its horrifying email address was TalentedTom@gmail.com, and though the message was brevity itself at a mere four words, it still managed to get its point across. You are a thief, it said.

Buckle up. Jacob Finch Bonner (Jake) had some early success as a writer. His novel, The Invention of Wonder, received critical acclaim, the New York Times including it in its list of New and Noteworthy books. But it has been a while since that critical (if not commercial) triumph. A story collection was largely ignored and then there was, well, nada. Jake teaches at Ripley University in northern Vermont. It is not writer’s block Jake suffers, it is more like Writer’s-Great-Wall-of-China. He teaches creative writing, endures the continual delights of academia politics, and lives, literally, on Poverty Lane. But then Evan Parker happens.

An incoming student, Evan is convinced that he has a perfect plot for a novel. He is insufferable, arrogant, condescending, and clearly thinks that Jake cannot really teach him anything. He does not want to tell anyone the specifics of his work, just get a degree, educational cred, and some connections, figuring that is all he will need. But a time comes when he does share with Jake the arc and some detail of his novel. Turns out Evan was right. A few years later Ripley has down-sized, and Jake is working at a proprietary artist colony.

All he had ever wanted was to tell—in the best possible words, arranged in the best possible order—the stories inside him. He had been more than willing to do the apprenticeship and the work. He had been humble with his teachers and respectful of his peers. He had acceded to the editorial notes of his agent (when he’d had one) and bowed to the red pencil of his editor (when he’d had one) without complaint. He had supported the other writers he’d known and admired (even the ones he hadn’t particularly admired) by attending their readings and actually purchasing their books (in hardcover! at independent bookstores!) and he had acquitted himself as the best teacher, mentor, cheerleader, and editor that he’d known how to be, despite the (to be frank) utter hopelessness of most of the writing he was given to work with. And where had he arrived, for all of that? He was a deck attendant on the Titanic, moving the chairs around with fifteen ungifted prose writers while somehow persuading them that additional work would help them improve.

But when Jake learns that Evan Parker has died, and that his magnum opus appears to have never been published, he makes a decision, backing it up with large volumes of excuse-making and a cyclotronic level of self-justifying spin. Three years later he is on his long-dreamed-of book tour, promoting his hugely successful novel, Crib. He still carries guilt and paranoia about being found out. The guilt he manages (Mr. Bonner, when it pops up, take two excuses in a large glass of entitlement and call me in the morning), but I guess you can’t be too paranoid. Then the message.

This is where the book kicks into high gear. Who is #Talented Tom, how much does he know, what can he prove, what does he want, and what will he do? Is this blackmail? I was reminded of a classic story of guilt and crime.

…at length, I found that the noise was not within my ears. No doubt I now grew very pale; –but I talked more fluently, and with a heightened voice. Yet the sound increased –and what could I do? It was a low, dull, quick sound –much such a sound as a watch makes when enveloped in cotton. I gasped for breath –and yet the officers heard it not. I talked more quickly –more vehemently; but the noise steadily increased. from Edgar Allen Poe’s The Tell-Tale Heart

An e-mailed threat was not the only thing he left Seattle with. Anna Williams, a fan, the producer at the Randy Johnson show at KBIK, who had arranged for Jake to do the interview, chats him up afterwards. They have a coffee, stay in touch even when he returns to New York, and their connection soon become a thing. The messages do not stop.

but the noise steadily increased. Oh God! what could I do? I foamed –I raved –I swore!– EAP

We ride along as Jake deals with his publisher, his agent, his fans, and his peers. There is a lot of support for him in the community, as most presume it is just a nutter harassing him in search of a lawyer-enhanced payday. But Jake knows this is no gold-digging faker. Yet he still feels it necessary to keep this from Anna for a long time, even after they are living together. Just how dangerous is TalentedTom?

I seem to be attracted to sociopathic male antagonists. I also appear to like college campuses. – from the Scoundrel Time interview

The engine shifts into overdrive when Jake decides to stop playing defense and begins doing some serious research to identify his tormentor, and learns that his may not be the only theft related to Evan’s plot.

It grew louder –louder –louder! And still the men chatted pleasantly, and smiled. Was it possible they heard not? Almighty God! –no, no! They heard! –they suspected! –they knew! – EAP

In addition to Poe, I was reminded of another book-stealing novel of recent vintage, A Ladder to the Sky, with a much more flagrant, and feckless thief. In this one Korelitz drives us through Jake’s excuses and makes us consider just where fair use ends and theft begins.

As one might expect there is a lot in here about writing. Where do you get your ideas? an eternal question, the struggle to create. Coping with a book tour, difficult questions, redundant questions, ignorant interviewers. As this is Korelitz’s seventh published novel, and I am sure she has motored the book tour circuit a time or six, I expect this is the product of experience. As is her take on campus life, coping with students, and the horrors of faculty politics. Not to mention a writer’s inner turmoil.

The Plot may seem a little hard on writers, but that shouldn’t surprise anyone; we’re hard on ourselves. In fact, you couldn’t hope to meet a more self-flagellating bunch of creatives anywhere. At the end of the day, though, we are the lucky ones. First, because we get to work with language, and language is thrilling. Second, because we love stories and we get to frolic in them. Begged, borrowed, adapted, embroidered … perhaps even stolen: it’s all a part of a grand conversation. – from Acknowledgements

The only place I had issues was with the baddie’s final explanations. I cannot really go into details as it would require significant spoilage, but the motivation for what comes at the end seems thin. A name change might have raised questions at an institution. And one might have expected a greater bit of interest on the part of the authorities after one death, particularly in tracing back a specific person’s real-world movements, and someone else’s on-line activity.

That said, keep your BP meds handy. This is a tension-filled journey, page-turning wonderfulness, leaving you panting to know what happens next, and unable to turn out the light and go to sleep before you get through some serious white-knuckle twists and turns to arrive at The Plot’s destination.

I received an early e-look through MacMillan’s Reading Insiders Club. While reluctant at first, they came around after I used a pitch written by a friend.

Her FB page is inaccessible at present. I am not sure if she has shut it down permanently, or if access is merely limited.

This is Korelitz’s 7th published novel

Her book You Should Have Known was adapted to the recent TV miniseries, The Undoing

Interview
—–Scoundrel Time – Into that Dark Room Where the Fiction Gets Made: An Interview with Novelist Jean Hanff Korelitz

Items of Interest
—–The Poe Museum – The Tell-Tale Heart
—–My review of John Boyne’s 2018 novel, A Ladder to the Sky
—–Sidebar Saturdays – Plots, Prose And Plagiarism In Fiction – Four Things Every Writer Should Know About Literary Theft by Matt Knight
—–Catapult – Reading Group Guide

2 responses to “The Plot by by Jean Hanff Korelitz”