A Deadly Wandering by Matt Richtel 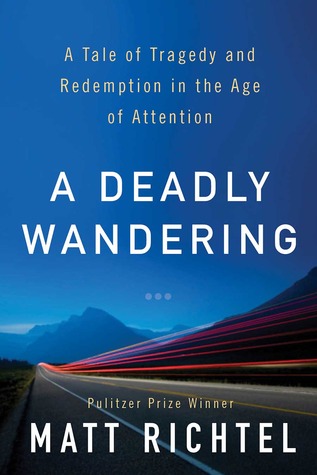 Hi, welcome. I’m happy to see you are settling in to read this now. But…what?…really?…please…ignore that chirp that just told you a new e-mail arrived. It is probably just another add for Viagra or penile enlargement. It is almost never something critical, so…hey…come back. Son of a bitch. (Taps fingers on desk, plays some solitaire, checks watch) Ah, you’re back. Took long enough. Geez. All right, can we get back to it now? You remember? The book is A Deadly Wandering, a pretty amazing look at attention, the demands on it, how it functions, how it is being compromised, and what the implications are for some aspects of that. Stop, no, do you have to answer the phone now? Can’t it wait? (sighs loudly, checks e-mail on a separate screen; weather.com lets us know upcoming conditions in another tab; who is pitching for the Mets tonight?) Oh, you’re back, sorry. Been there long? I must have wandered off. Focus.

I know a little bit about distraction. My job entails constant blasts of it. I work as a dispatcher for a security company. I have a dozen or more sites checking in every hour to make sure our guards are not sleeping (or that they know how to set the alarms on their cell phones). People call asking for their schedules. People call at 2 in the morning to let us know they will not be showing up for their 6am shift. They call because they just turned the wrong way and the cell phone in their pocket somehow redialed the last number they’d called. They call at 4am to let us know they will not be coming in for their 6am shift. They call asking for direction when there is some event at their site that requires handling. Our clients call, sometimes asking for emergency ASAP coverage in diverse places across the continent, sometimes to add ridiculous increases to the number of guards they want for a morning shift at a large institution. Our security guards call to ask if their check is at the office, or to inquire as to why the totals on their checks did not match what they expected. They call to let us know they have arrived at their post. They call to let us know they have clocked out for the day. They call at 5am to let us know they will not be in for their 6am shift because they have a newly discovered “appointment.” There are many, many calls. It makes it damned tough to keep a log of all the calls, particularly when half a dozen arrive at the exact same moment. It makes it tough to prepare the multiple reports of overnight activity, all of which have to be transmitted during the busiest time of the morning. In the middle of this, the boss comes in, drops papers on my desk and asks when this or that person arrived at or left from a post sometime in the last week or so. For someone who is, shall we say, not comfortable with being interrupted, this presents some challenges. And it presents a real problem. I write the bulk of my reviews while at work. And to enter notes, do research on items, and then compose actual reviews of books during this time can be a bit difficult. Thoughts that have not made their way into a file are in constant danger of vanishing into the ether with the next barrage of incomings. I scream sometimes. I frequently forget what I was doing before the latest set of calls. And, struggling to remember, I am interrupted yet again by the next set. The one good thing about this blitzkrieg of interruption is that I am not enduring it while behind the wheel of a ton-plus hunk of metal hurtling down the road at 60 mph. My sanity may be in jeopardy, (or long gone) but I present no existential threat to the rest of humanity. The same cannot be said for the main character in Richtel’s story.

By all accounts nineteen-year-old Reggie Shaw is a decent young man. A Mormon, he was eager to serve his community by preparing for and then undertaking an LDS mission. His first try had come up short, so he was back home, working until he could build up enough moral credit to try again. In September, 2006, while driving a Chevy Tahoe SUV, Reggie had his Cingular flip-phone with him and was texting with his girlfriend. A witness reported seeing him weaving across the center line multiple times. Finally, Reggie weaved too far. The results were fatal. Reggie came through ok but two scientists were killed as a result of Reggie’s texting, leaving wives and children to pick up the charred pieces of their lives and go on without their breadwinners, husbands, fathers. Reggie denied he was texting when the accident occurred.

Matt Richtel is a novelist and top-notch reporter. He won a Pulitzer for a series of articles, written for the New York Times, in which he detailed the national safety crisis resulting from increasing use of distracting devices by drivers. He has written a few novels and even pens a comic strip. There is nothing at all amusing, however, about the tale he tells here. 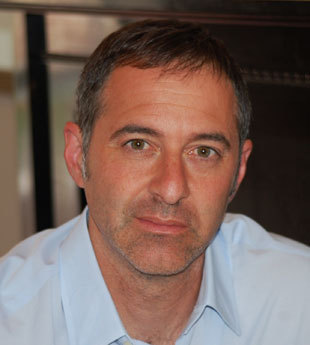 Matt Richtel – from his site

The core of A Deadly Wandering is how constant distraction, particularly while in a car, kills. Richtel looks at the case of Reggie Shaw as a prime example of how the distractions that have become embedded in our lives have unintended consequences. Richtel spends time with Reggie, with the cop who pursued the case when most officials wanted to brush it off and move on, the surviving family members, and a victim’s advocate who pursued prosecution of the case. Richtel also talks with several neuroscientists who have been studying the science of attentiveness. That material is quite eye-opening.

There are legal questions in here regarding where responsibility lies for such events, and how far communities are willing to go to punish violations and even to establish that such behavior is not permissible. Where does your freedom to act irresponsibly interfere with my right to stay alive? There are scientific questions about how the brain functions in a world that seems to demand multi-tasking. How does the brain work in dealing with attentiveness? What is possible? What is not? Where are the edges of that envelope?

When drug companies want to bring to market a product for public use, they must go through a significant review process to make sure their product is safe to use. Before auto manufacturers can bring a vehicle to market they must put it through safety testing.

But neither Verizon nor any other cellphone company supports legislation that bans drivers from talking on the phone. And the wireless industry does not conduct research on the dangers, saying that is not its responsibility – From – Dismissing the Risks of a Deadly Habit

And the corporations know what they are doing with their techolology.

If you take yourself back millennia, and you’re in the jungle or you’re in the forest and you see a lion, then the lion hits your sensory cortices and says to the frontal lobe, whatever you’re doing, whatever hut you’re building, stop and run.
Well, here’s what scientists think is happening in this data era, is that these pings of incoming email, the phone ringing, the buzz in your pocket, is almost like we get little tiny lions, little tiny threats or, let’s say, maybe little tiny rabbits that you want to chase and eat, you get little tiny bursts of adrenaline that are bombarding your frontal lobe asking you to make choices. But these in some ways aren’t these modern bombardments; they’re the most primitive bombardments. They’re playing to these most primitive impulses and they’re asking our brain to make very hard choices a lot. – from the Terry Gross interview

In addition, and in a chillingly similar impact to other addictive substances, our communications technology knows how to make itself feel crucial to us.

when you check your information, when you get a buzz in your pocket, when you hear a ring – you get what they call a dopamine squirt. You get a little rush of adrenaline. So you’re getting that more and more and more and more. Well, guess what happens in its absence? You feel bored. You’re actually conditioned by a kind of neurochemical response. – also from the NPR interview

Richtel follows Reggie’s story through to the end, at least for some of the players here. Laws have been changed. New knowledge has been gained. Responsibility has been allocated. Amends have been attempted. It is a moving tale. In addition, you will learn a lot about what science has found about how our brains handle multiple concurrent demands. You will learn about change in how distracted driving is being addressed by our legal system. But most of what you will get from reading this book is a chilling appreciation for what is involved in distracted driving. You might even be persuaded to switch off your phone the next time you get behind the wheel. At least I hope you are. I would like to live a bit longer and not be taken out before my time because someone was talking on the phone with their friend, texting with their significant other, or trying to order penile growth products from the road. I would like to live long enough to spend at least a few more nights screaming at the phone to stop ringing at work so I can get some writing done. That call you were thinking of making while in the car can wait. It really is a matter of life and death. A Deadly Wandering is must read material. Please, please pay attention.

This review has been also been posted at GoodReads

A list of Richtel articles in the NY Times’ Bits blog

The Pulitzer site includes links to all the pieces in Richtel’s award-winning series. Very much worth checking out

Another article Richtel did looked at the benefits of uninterrupted face time free of technological intrusion, from August, 2010, Outdoors and Out of Reach, Studying the Brain

There is some great material in Richtel’s 2010 interview with Terry Gross on NPR, Digital Overload: Your Brain on Gadgets

There are some interesting pieces on Oprah’s site. Distracted Driving: What You Don’t See is pretty good. And it is worth checking out Oprah’s No Texting Campaign

Filed under Non-fiction, Psychology and the Brain, Public Health, Reviews