The Perfect Daughter by D.J. Palmer 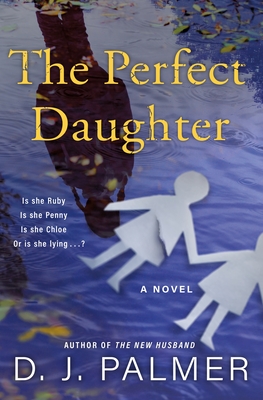 “When we arrested her, she was covered in blood—it was all over her body, in her hair—so when you come to the station, you should bring a change of clothes.…there are no visible wounds on Penny. But the victim was found deceased at the scene, and we believe it’s the victim’s blood on your daughter’s body.”
Grace got the impression the detective was holding something back.
“She’s calling herself Eve, but that’s not the name on her license.”
Again, a chill ran through Grace. Eve.
“She said she doesn’t remember anything that happened before we showed up. We think maybe she’s in shock, but we’re not sure,” Allio went on. “Is Eve a nickname?”
Grace paused, deciding how to answer. “It’s more complicated than that,” she offered.

A bucket of ammonia, boats and water, a book with a blue cover. What do they all mean? The clues keep popping up, from different voices throughout the novel. Of course, the voices, however diverse they may be, all reside inside one body. Penny Francone is afflicted (or is it protected?) by a mental health condition now known as DID, or Dissociative Identity Disorder, what we used to call Multiple Personality Disorder. People with this are seen today as a single, splintered personality, rather than separate entire personalities vying for literal face time.

We are presented straight away with a particularly tough scenario. It was sixteen-year-old Penny’s birth mother, Rachel, a woman with a checkered past, who was brutally murdered. Penny had been found, unaccompanied, in a city park when she was four years old. Birth mother and daughter had recently reestablished contact, and Penny had gone to b-mom’s place to meet. Penny was found next to the body, covered in blood, holding the murder weapon. Did Penny kill her mother? Looks pretty open and shut. But perhaps it was one of her alters, Eve, maybe, or Ruby, or Chloe, or even some other, as yet undiscovered, alter. But the question remains. Is Penny a supremely gifted liar, fooling everyone, and truly guilty of slaughtering the woman who had cruelly abandoned her, or is there something else going on?

Grace Francone is terrified for her child. DID is not a fully recognized condition, and there is a strong likelihood that her teenager will spend the rest of her life in prison, for a crime she apparently cannot recall committing. She is currently being held in a less than cushy state institution, largely a grim custodial service for the criminally insane. Penny’s eighteen-year-old brother, Jack, serving the needs of exposition, is planning to make a documentary about his sister. We get his intermittent second-person commentary, as if he is telling Penny about his plans.

Your shrink at Edgewater was a guy named Dr. Dennis Palumbo, who we all despised. Well, maybe all but Ryan, because Palumbo thought the same thing he did: that you didn’t have DID. According to Palumbo, DID wasn’t even a real condition, and didn’t belong in the DSM…It’s thought that DID is just a variant of a borderline personality disorder, or in your case an antisocial personality disorder, and that the appearance of your alters is akin to fantasy play rather than a verifiable neurological state. In short, Palumbo thought you were an expert liar.

Thankfully, Palumbo (The name of this character, BTW, was sold at auction to raise money for The Evelyn Swierczynski Foundation. There is a real-world writer/psychologist named Dr. Dennis Palumbo out there.) is replaced with a different shrink, someone with a more open mind, Dr. Mitchell Hughes, a guy with issues of his own, (does there exist a shrink with none?) but an eagerness to learn the truth about his patient.

In order for Penny to avoid becoming a permanent resident of a penal institution, she will need support for her not-guilty-by-reason-of-insanity plea with an official DID diagnosis. Doc Mitch is skeptical, but willing to look at the facts. He and Grace form a team trying to ferret out the truth, and give Penny at least a fighting chance. Most mysteries entail sleuthing in the concrete world, and there is plenty of that here, for sure, but this Doctor Holmes and Ms. Watson must do a lot of their work inside the world of Penny’s personalities. It is far from elementary.

This was a bit of a change for DJ Palmer.

This was the hardest book I’ve ever attempted. There were so many moving parts and for my first ever mystery (mostly I do crawl out from a hole thrillers, not murder mysteries with clues peppered throughout). – from the Judith D. Collins interview

And nicely done too. It is the author’s third novel under this name. Saving Meghan came out in 2019 and The New Husband was published in 2020. But DJ Palmer is an alter, of a sort, for Daniel Palmer. He is the son of physician and noted author of medical thrillers, Michael Palmer. Daniel even wrote some books that were published under Michael’s name (“with Daniel Palmer”) after his father died. His books as Daniel tended toward the technological thriller sort, building on his years working in the tech industry, while those written as DJ tend more towards the familial and medical. Saving Meghan, for example, is about Munchausen’s by Proxy.

When I switched from writing as Daniel Palmer to writing as DJ Palmer, my themes changed along with my name. The DJ books delve more into family drama and psychological suspense. – from The Nerd Daily interview

As such, DJ can step back from the ready-set-flee that permeates so many thrillers and look at the family dynamics at play. Loyalty, for example, comes in for some attention. Grace is fiercely loyal to and protective of Penny, and her brother, Jack, is on her side as well, but big brother Ryan is more hostile than helpful. A question is raised as to where Penny’s loyalties lie regarding her birth mother.

The story is presented through several non-DID points of view. We see most through Grace, as she girds for battle, and enters the fray. Jack offers some exposition in his once-removed take, as he addresses Penny, as if writing letters to her. Finally, there is Doctor Mitch, who offers us medical expertise, and the step-by-step of exploring a very strange terrain.

Palmer offers not just a medical take on DID, but shows how it impacts in personal, family, legal, and medical ways, and how easily it can be misdiagnosed. He does a great job of showing how DID affects not only how her family relates to Penny, but how the world does. There are serious legal implications for her if the people in a position to decide her future deny the existence of the DID diagnosis entirely. In that case, it is off to jail forever. Life over. In addition, Grace having to take on the out-of-pocket legal costs and spend her time working on the case instead of at the family business (a pizzeria based on Palmer’s experience with owning a small restaurant) has serious implications for the family’s financial welfare, and stress level. It certainly turns on its head the supposed legal presupposition of innocent until proven guilty and shows how families of the accused are punished along with those charged with a crime. A dismissive diagnosis can destroy a life, but also cause collateral damage to all those connected to it. One of Palmer’s aims in the book was to dispel myths about the DID condition. He certainly changed my perception.

The action continues apace, as clues are found, investigated and incorporated or dismissed. This is a very readable, engaging thriller-mystery. But every now and then there are passages that made me break out into smiles.

On that bleak afternoon, Lucky Dog looked anything but. The dark interior had the ambience of a power outage… Four of the nine stools at the dark varnished wood bar were occupied by beefy men, who put the dive in dive bar… Behind the bar stood stacks of bottles that looked sticky even from a distance. The air reeked of booze and cleaners, overlaid by a whiff of desperation.

DJ Palmer has integrated multiple elements, of medical mystery, suspense, family drama, and high-tension-watch-your-back thriller, into an engaging, white-knuckle read. Polly-Eve-Chloe-Ruby Francone may not be the ideal progeny, but The Perfect Daughter is a perfectly fabulous read. Set aside as many hours as it takes. You owe it to your self.

“Dr. Cross, who gave us the DID diagnosis, said that we all start out with multiple personalities when we’re young. Is that something you believe?”
“I do,” said McHugh, nodding. “It’s like learning about life through committee. Those disparate voices in our young minds help us figure out the world and how different environments and stimuli affect us. Do we like things sweet or sour; what’s funny to us; what scares us? By age nine, our experiences tend to mold us into the person we become, and all those likes and dislikes, our moods and disposition, solidify into a single identity—this concept of self.”

My review of Palmer’s 2022 novel, My Wife is Missing

Interviews
—–The Nerd Daily – Q&A: D.J. Palmer, Author of ‘The New Husband’
—–Three Good Things – D.J. Palmer and Lisa Unger – chatty, offers a feel for the author, but is not particularly informative
—–The Poisoned Pen Bookstore – DJ Palmer in Conversation with Lee Child – This is a really good one
—–Judith D. Collins Consulting – Q & A with D. J. Palmer – there is a fair bit here

Items of Interest
—–The Perfect Daughter Discussion Guide
—–American Psychiatric Association – What Are Dissociative Disorders?
—– American Documentary – Busy Inside – the film is a documentary about people with Dissociative Identity Disorder – this link takes you to the film’s site, but not to the film itself

The following emerged from some inner rhymester

CLUES
Boats and water figure large,
a book with a blue cover,
A bucket of ammonia,
And meanings to discover

Ruby, Chloe, Eve, and Penny,
We’re not sure, in truth, how many,
Did an alter kill her mother
Or could it be it’s someone other?

Tough to question any one
So quickly are they here and gone.
But answers lie behind those screens
All is rarely what it seems.

2 responses to “The Perfect Daughter by D.J. Palmer”