The moon blew up without warning and for no apparent reason.

I guess in order to indulge in a bit of world-building one must destroy the world first.

Neal Stephenson is a genius. A polymath with a wide range of interests, he specializes in the big idea, and the more concrete the better. In this way he carries forward the tradition of hard science fiction, in which the best example is probably Arthur C. Clarke. Stephenson eschews FTL transportation, time travel, invading aliens, or any of the other tropes of sci-fi that cannot find a solid basis in contemporary science. Instead he takes what is known, adds what is possible, and extrapolates to what could be. His one concession to the unknown is his opening, noted at top. Although a theory or two are trotted out, we never really learn what caused the moon to explode. Consider it the MacGuffin of the novel, the plot device that gets the action moving. I guess breaking up isn’t hard to do. No exploding moon? No story. Why does it explode? Doesn’t matter. The story is about what happens after.

The kernel around which the story nucleated was the space debris problem, which I had been reading about, both as a potential obstacle to the company’s efforts and as a possible opportunity to do something useful in space by looking for ways to remediate it. Some researchers had begun to express concern over the possibility that a collision between two pieces of debris might spawn a large number of fragments, thereby increasing the probability of further collisions and further fragments, producing a chain reaction that might put so much debris into low earth orbit as to create a barrier to future space exploration. – from Stephenson’s site

And the story is a compelling one, not so much in the sense of classic plot construction, but in terms of how we get from the biggest “OH CRAP” moment in human history, to something not guaranteed to soil pants. Stephenson looks most attentively at the engineering details of what is involved in trying to salvage the human race, once it is clear that the sky will go all to pieces, that the term scorched earth will be applicable to all the land on Earth, that the homeland will become a wasteland. What hardware is necessary? What is available? What can go wrong? How do we get from here to up there? This is his gig. He loves this stuff and it shows. He also does a good job of portraying the ensuing struggles down below. Who will be selected to survive? How will they be picked? How will the politics of the selection be handled? What will the criteria be? Ideas bang into other ideas, which fracture and crash into even more ideas, and so on, until you have an entire layer of nifty concept blanketing your brain. 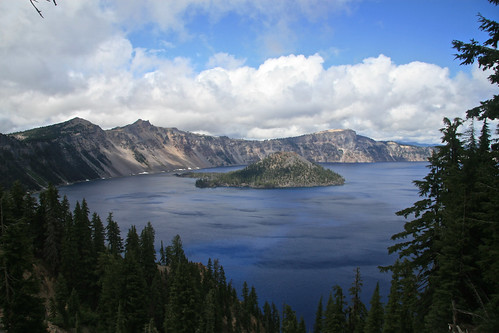 World leaders make the big announcement of imminent doom at Crater Lake, and yes, it really is that blue

I think Stephenson is more optimistic than most and his presumptions about the level of on-the-ground conflict and pure lunacy are out of line with what we know about humans. He gives only a little thought to deniers, but in a country like the USA, for example, in which a quarter of the population does not believe in evolution, in which the Republican base clings to beliefs that would make L. Ron Hubbard scream for mercy, in which Texas lunatics of both the tinfoil-hat and elected variety (I know, no real difference there) persuade themselves that a military exercise is a federal invasion, there would be a lot more going on, denier-wise, than Stephenson projects. All theoretical of course, but do you really think that in the time remaining that birthers and those who believe the Apollo moon landing was a hoax would not make use of their considerable ordnance to make life even more miserable for those with brains?

The book is divided into three parts, although it breaks down into smaller chapter chunks. The first takes us from the initial event to the beginning of the end of Earth as we know it, how humanity comes together, or doesn’t, to preserve the species. Part two takes on the final days of earth and a whole new world of conflict, resolution, or not, setting the stage for Part three, five thousand years on, when, through forces natural and engineer-enhanced, it is again possible to set foot on Mother Earth without singeing your toes. The seven eves of the title refer to the last orbiting survivors, whose reproductive capacity and DNA is used in an attempt to reconstitute the species, and, hopefully, in time, reclaim the original Mother ship.

Stephenson does action-adventure pretty well, and there is plenty of that here. The end of the Earth is a compelling starting point and survival of the species concerns will keep you engaged. Will this work? Will that? Who will live? Who won’t?

Character is not the thing in Neal Stephenson fiction. His greatest talents lie elsewhere. Although it is definitely fun that he puts an avatar of Neal DeGrasse Tyson aboard. The significance of character here is to consider personality differences and their social, and genetic engineering implications. Given people with certain traits, how are they likely to behave, and how will those behaviors help or harm the survivability of homo sap? There is consideration of the concept of the state of nature. What is natural for people? How is that defined? Pretty interesting stuff. And there is plenty more brain candy in SevenEves. (Not for you, zombies, go away) On the hardware side, how about harnessing asteroids and comets for raw materials? Using robots of unexpectedly small dimensions for space-mining? Making orbiting environments in which humanity could survive, and even expand? How about some notions for terra-forming not only lifeless space rocks, but…um…Terra. How about interesting ways of transporting people and materials between orbiting locations, and between Earth and orbit. How about some advanced notions for individual flight on-planet? Life sciences? How about the challenges of food production in space? Bio-engineering is the biggest item here, not only in selecting who gets to be among those sent into orbit to survive torch-ageddon. But in figuring out how the differences in people can be used to ensure survival of the species, and looking at the results, some of which are quite surprising. Social science? Well, the science is a lot softer here, but the politics of end-times Earth and struggles for power among the spacers offer a look at elements of human nature that will be familiar. Stephenson’s optimism about our ability to think our way to actual survival is balanced by his recognition that we are, as a species, probably certifiable, so will continue having at each other as long as there are others to go after.

An O’Neill Cylinder – from the outside

I am certain that those more versed in contemporary sci-fi will have more recent comparisons to make, but the work that I was most reminded of here is the Hugo-Award-winner for Best-All-Time Series, Isaac Asimov’s Foundation series. In both, a core of talented people (a broader range of talent than in Stephenson‘s more engineer-and-hard-science-oriented portrayal) are brought together to preserve human culture in the face of an imminent catastrophe. The specifics are quite different, but they share a grandness of vision. No psychohistory in SevenEves, but the multi-millennial look at humanity offers the opportunity for and realization of a great speculative vision.

There are some commonalities between SevenEves and another recent, and very popular, sci-fi offering of the space variety, The Martian. Not in girth, of course. The Martian, at a mere 384 pps, could dock with and be pulled up on the side the 880 page SevenEves like a tender boat on a cruise ship. Both deal with life-and-death scenarios in an airless void (no, not the US Congress), although one deals with a single life in jeopardy, while the other takes on a larger target. But there is a heavy emphasis on tech in both. Weir’s wonderful story offered an engaging narrator and way too much detail on how he goes about attempting to survive while stranded on the red planet. Stephenson writes about things that he finds interesting whether or not they clutter up the story with technical minutiae, and at 880 pps, trust me, there is too much detail. Hey, his book, his story. He gets off on the details of mechanics, and it is nowhere as mind-numbing as an endless jeremiad by, say John Galt, but you may find yourself feeling a need to skim from time to time. (Purely an aside – I think Chris Moore should write a novel about the Republican clown car of presidential candidates, called The Galt in our Stars, in which someone gets a life threatening disease and no one cares). I wonder also how the very small number of remnant original eves is supposed to be able to provide the training their progeny will require to master all the skills required to sustain civilization. I am sure there are many other details one could look at in considering the next five thousand or so years, but it might take a few more volumes.

SevenEves is a major contribution to contemporary science fiction. It is engaging enough on a visceral level, but it is crack not just for sci-fi fans, but for futurists, scientists, geneticists, engineers, and those concerned with how humanity will survive the challenges that lie ahead. It is a big book, not only in its physical bulk, but in its ambition and range of interests. Like the great works of his predecessors, Asimov, Clarke and other giants of science fiction, the vision Stephenson has built in SevenEves will be read, I expect, as long as there are still people left alive, whether on Earth or not.

Links to the author’s personal, Twitter, Google Plus and FB pages

Folks who object to paying their taxes are already interested in working on extra-national, and even extra-terrestrial living spaces. At Island One Society there is information on sundry plans that are currently being considered. Please do not take this as an endorsement of any of the political viewpoints expressed there. I include this link purely because it gathers together a nice list of such projects.

O’Neill Cylinders are mentions in SevenEves. This link offers a nifty animated fly-through that will offer a better sense than a single graphic image could.

Roboticized mining is the likeliest way we will make use of extra-terrestrial natural resources This example of the coming tech is called Swarmies.

I have read several Stephenson books over the years, but Reamde is the only one I have previously reviewed.

More shots of Crater Lake, among other places in that general neck of the woods

Fascinating piece from The Atlantic Magazine on mining the asteroids, among other things, Robots, Platinum, and Tiny Space Telescopes: The Pitch for Mining Asteroids by Ross Anderson from the May 14, 2012 issue