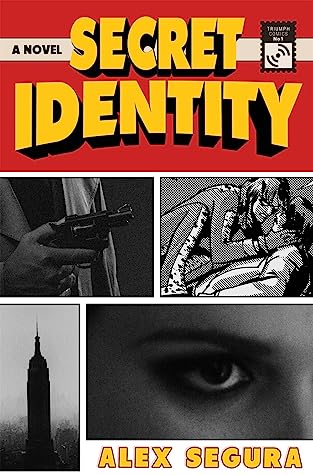 The comics business was messy—a slapdash sprint to meet immovable deadlines, a blur of pages flowing from production to editorial and back before being jettisoned out the door to the printer. Carmen loved it.

Miami was a city, too, Carmen knew—but New York was something else. A disease that bubbled and expanded and multiplied and morphed, like some kind of magical, mystical being that seemed from another world.

Carmen Valdez, late of Miami, is where she wants to be. She may not be exactly doing what she wants, but she is trying to get there. A New Yorker for the last year, Carmen is 28. She works at Triumph Comics, a third-tier publisher of such things, and is living the dream, if the dream is to be working as a secretary to a boss who cannot see past her gender, cannot even imagine a woman, let alone a Hispanic woman, actually writing stories for his press. But the stories are there, the ideas filling notebooks. She gives him some, but even if he bothers to read them, he dismisses the work out of hand. All she needs is a chance. And then one appears.

Harvey Stern is a junior editor there, young, friendly. They bond over a shared love of the medium (a love she had acquired from her father taking her out for father-daughter bonding that included the buying of comics). They are friendly without being quite friends. The house has a sudden need for a new character; Harvey is given the job of coming up with one, a female hero who will get a rise out of young male Triumph readers. Carmen sees her opportunity and offers to “help.” Their work together goes well. The story is mostly hers, of course, but Harvey has some skills. They produce a pretty good book. It does well. Problem is that no one other than she and Harvey knows the truth about how it came to be. Then Harvey suffers a BLAM! BLAM! leaving him with even less conscious corporeality than an invisible six-foot pooka. Guess who finds the body? And the noir gets dark.

I’ve always been fascinated with Megan Abbott’s work and her ability to bring the tenets of noir to areas where you wouldn’t expect noir to exist—gymnastics, cheerleading, science, and so on. She crafts these narratives that are tense, fraught, and loaded with style outside of the typical noir settings. I remember reading Dare Me and just thinking, huh, wouldn’t it be cool to write a comic book noir? – from The Big Thrill interview

Segura had recently finished writing his Pete Fernandez Miami Mysteries, so has the chops to produce a pretty good whodunit. Carmen sees, in short order, that the police are not up to the task. She also knows that unless she can figure out why Harvey was killed, and by whom, she will never be able to get recognition for her work, or maybe sleep at night. Harvey is not the last person attacked by a mysterious villain.

Secret identities abound here. Carmen hides her true author self from the boss because of the sexism of the age. Everyone seems to have a secret. Harvey certainly does did. Are all the names that we are given really the characters’ true names? Might there be an alias or two creeping around, for dark purposes?

she had to become someone else to survive

Segura has been busy in the comic book industry for many years, working on Archie Comics, while living in Miami, then moving to New York to work for DC. He has written detective novels, and a Star Wars book, stand-alone mysteries, short stories, a crime podcast, and probably an encyclopedia. He is married with kids, and I imagine that he must sleep some…time. Maybe he is one of the characters he writes about and his secret power is eternal wakefulness. Captain Insomnia takes on every request for writerly product, and satisfies them all.

He has a particular soft spot for the 1970s in the comics industry, when the industry’s body was laid out on the street, bleeding money and readers. Who would come to its rescue?

Well the comic book industry was really struggling at that time after the glory years of the 50s and 60s. Comics were struggling. It wasn’t like today, where we have shows about Peacemaker or obscure characters – it was considered a dying industry. So I wanted to use her passion for the medium and contrast it with comics at its lowest point, and then show her fighting to control this one thing she loves. – from the Three Rooms Press interview

This was a time when comic books were sold only on newsstands or in small stores, before there were comic book conventions, before the steady drumbeat of blockbuster films based on comic book characters. There was plenty wrong with the industry at the time (there probably still is), with notorious cases of people stealing credit for the work of others. Some of those are noted here. In fact, there are many references made to well-known names in the comic book industry. I am sorry to say that most just slipped past me, as I am not the maven for such things that Segura and no doubt many readers of this book are. I can report, though, that not knowing all the references did not at all detract from my overall enjoyment, and recognizing the ones I did enhanced the fun. He even tosses in a nod to a character of his from another project, as that character’s story was set in the same time period.

There was plenty wrong with NYC at the time. I know. I remember. Fun City, originally a tossed-off line by a 1960s mayor facing multiple municipal crises (“It’s still a fun city.”) had not completed the shift to The Big Apple, itself a reconstitution of a city logo from the 1920s. The city, a political creation of the state, was starved by the state for the funds needed to provide the services it was required to offer, then was looked down on for that inability. It was a time when graffiti was ubiquitous, crime was up, and gentrification was beginning, as landlords were torching their properties to drive out residents so they could transform their buildings into co-ops. It was a time of white flight and a time when a local tabloid featured the infamous headline: Ford to City: Drop Dead, after NYC had turned to the federal government for aid. We get a taste with Carmen’s arrival.

the drab, claustrophobic walls of the Port Authority giving her the most honest first impression of New York she could expect. As she wandered the cavernous transport hub, a concrete behemoth at the tail end of the Lincoln Tunnel, she got a heavy dose of what she’d only imagined. A city in disrepair, boiled down into this one sprawling bus terminal. Leaky ceilings, shadowy conversations, blaring horns, and unidentifiable smells all coalesced into an unbridled fear that gripped Carmen as she stepped out into the New York sunlight.

Carmen’s mission is to solve the crime of course (When a man’s woman’s partner is killed he’s she’s supposed to do something about it. It doesn’t make any difference what you thought of him. He was your partner and you’re supposed to do something about it.”), but it would not be a noir if Carmen did not have some personal struggles going on as she struggles to figure out whodunit. There are parental issues, which might not be quite noir-ish, but a dark episode from her past stalks her, which certainly is. And there are some romantic bits as well, which definitely fit. She may have been raised Catholic, but Carmen is no nun. All this serves to make for a rounded character, one we can cheer for. Part of that rounding involves some flaws as well, and not the sort we are used to in our primary investigators.

For example, did Carmen really believe that the boss would disbelieve her if she told him the truth about authorship of The Legendary Lynx? There is a scene in which Harvey gets weird and take off after a working-together session. Holy Tunnel Vision, Batman! No freaking out over that? And she lets Harvey take her notebooks, her primary and unbacked up material? Even the Daredevil wasn’t that blind. There was something else, of no real consequence, that really bothered me. There is a scene which entails Carmen walking from the East Side to the West Side of Manhattan without any mention of passing through Central Park, which is directly in the path, or walking around it. That just seemed odd, particularly coming from a guy who lives in New York. Not really a spoiler, just wanted to spare most folks this aside.
I used to live on the West side of Manhattan, for most of the 1970s, West 81st Street, then West 76th Street, and walked across the park to my grad school on the East Side. Walked back, too, so, speaking from experience. Like I said, no consequence.

One thing you will definitely enjoy is the inclusion in the book of seventeen pages from The Legendary Lynx. They presage events in the chapters that follow. It is a perfect addition to the book.

Music permeates, including nods to the venues of the day, The Village Vanguard, CBGBs, The Bottom Line, et al. Her roommate, Molly, is a musician, rubbing shoulders with rising stars, like Springsteen and Patti Smith.

Secret identity covers a fair bit of territory, an homage to a beloved industry in a dire time, a noir mystery, a look at the city where he now lives, when it was on its knees, while saluting the music of the time and the creators of the comic book industry, warts and all. And he tosses in a comic book for good measure. This is a fun read of the first order, even for those, like me, who may not be comic nerds. In producing this very entertaining novel, Alex Segura has revealed his true identity, at least for those who did not already know. Clearly, Seguro really arrived on this planet not in a Miami hospital ward, but probably somewhere in the Everglades, his ship originating in a galaxy far, far away. He may or may not be able to leap tall buildings in a single bound, but he clearly wields otherworldly power as a writer. POW!

If it got published, I’d be ghostwriting it. . . . I mean, I’d get a shot, and if it did well we’d reveal my involvement, but. . . .”
“You’d be anonymous at first? Like his secret partner?”
Carmen waited a beat, letting her mind skim over what she already knew to be true. She nodded at Molly, hoping her friend couldn’t see her resigned expression in the dark.
“Is that what you want?” Molly asked. “To live your dream—in secret?”
Carmen felt her stomach twist into a painful, aching knot.

I received an ARE of Secret Identity from, well, I can‘t tell you, in return for a fair review. Thanks, folks. And thanks to NetGalley for facilitating an e-galley copy.

Item of Interest from the author
—–Segura’s Sub-stack

Items of Interest
—–When a man’s partner is killed…
—–pooka

One response to “Secret Identity by Alex Segura”