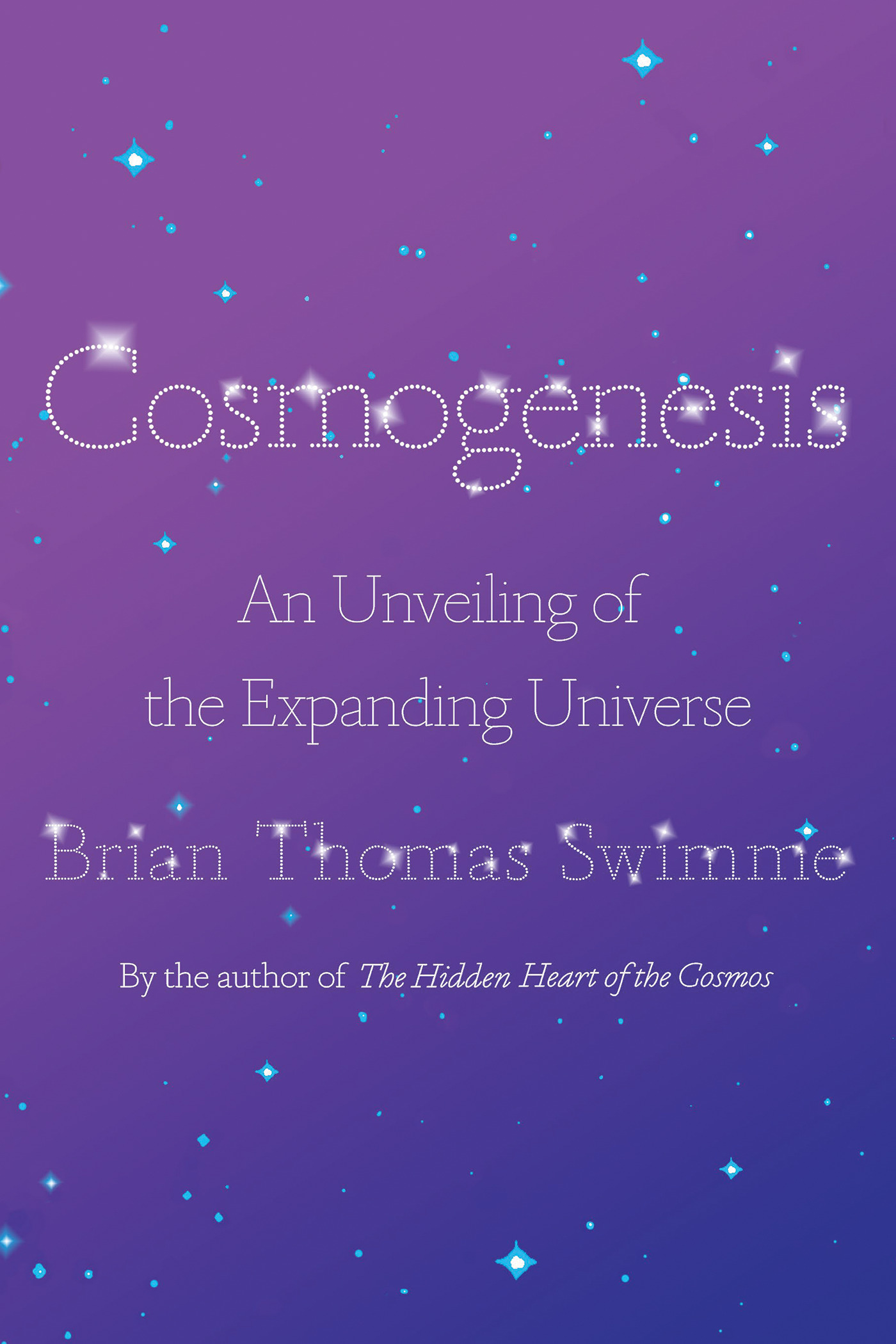 …it feels today that we are in the middle of a profound transformation of humanity.

Cosmos – The universe seen as a well-ordered whole; from the Greek word kosmos ‘order, ornament, world, or universe’, so called by Pythagoras or his disciples from their view of its perfect order and arrangement. – from Oxford reference

Genesis – Hebrew Bereshit (“In the Beginning”), the first book of the Bible. Its name derives from the opening words: “In the beginning….” Genesis narrates the primeval history of the world – from the Encyclopedia Britannica 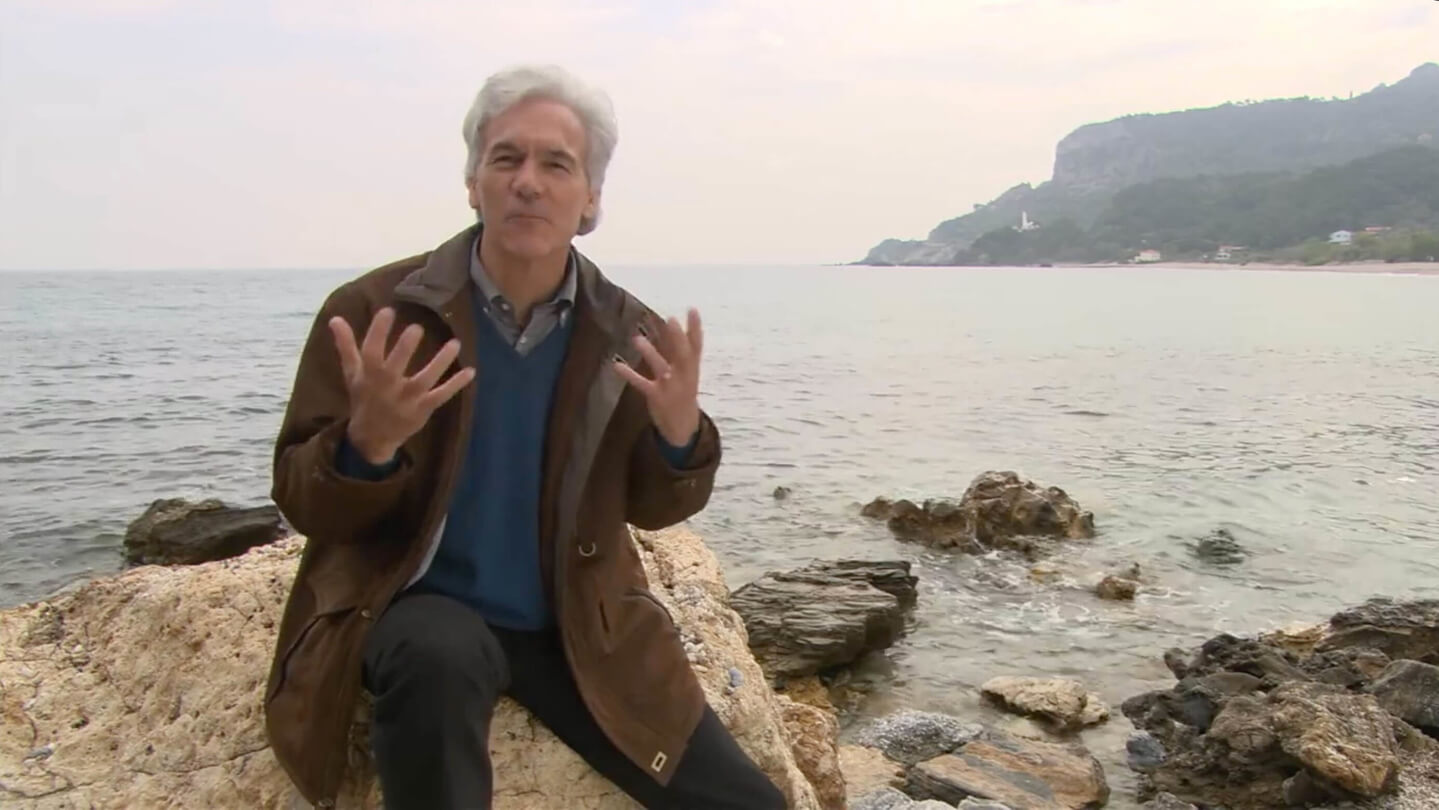 Brian Thomas Swimme – image from Journey of the Universe

So, Cosmogenesis means, at its root, the beginning of everything. Diverse cultures have come up with diverse understandings of how everything came to be. Where Swimme differs is in seeing the genesis, the beginning, the creation of everything as an ongoing process, not a one-off in deep history.

Cosmogenesis tracks Swimme’s journey from math professor to spokesman for a movement that seeks to rejoin science and spirituality. The stations along this route, which runs from 1968 to 1983, consist of people he considers great minds. He gushes like a Swiftie with closeup tickets to an Eras Tour show over several of these genius-level individuals, while relying on his analytical capacity to note shortcomings in some of the theories some others propose. Swimme mixes his approach a bit. It is in large measure a memoir, with a focus on his intellectual (and spiritual) growth, along with descripti0ns of the places where he lived, taught, and studied, and the people who inspired him, providing some background to the theories and ovbservations to which he is exposed.

A mathematics PhD, with a long and diverse teaching history, he grounds his work in the scientific. But he does not separate the scientific from the spiritual, from the human. In his view, we are all a part of the ongoing evolution of everything, noting that every subatomic part that make up every atom in our bodies, in our world, was present at the Biggest Bang, then was further refined by the lesser bangs of supernovas manufacturing what became our constituent parts. Even today, we bathe, wallow, bask, and breathe in radiation from that original event. It may have occurred fourteen billion years ago, but in a measurable way it is happening still. And we all remain a part of it.

There is a piece of Swimme’s material-cum-spiritual notion that I found very appealing. I have experienced an ecstatic state while perceiving beauty in the world. On telling my son about one such, I remarked that it was like a religious experience. He answered, “why like?” Swimme recruits like experiences to bolster the connection between the humanly internal and the eternal of the cosmos.

Bear in mind that Swimme grew up in a Catholic tradition, which clearly impressed him. There is a strong incense scent of religiosity to his work. Not saying that Cosmogenesis is a religion, but I am not entirely certain it is not.

As a child I had learned that the Mass was where the sacred lived.

I had a very different response to the religious world to which I was exposed as a child through twelve years of Catholic education. There was no connection for me between the Mass and the sacred, whatever that was. Mass represented mostly a burden, a mandatory exercise, communicating nothing about layers of experience beyond the material, while offering hard evidence of the power of institutions to control how I spent my time. I did not, at the time, understand the community building and reinforcing aspect to this weekly tribal ritual, separate from the religious content.

I believe that what we think of as spiritual or spectral is the reality that lies beyond our perceptual bandwidth. The ancients did not understand lightning, so imagined a god hurling bolts. With scientific understanding of lightning, Zeus is cast from an imagined home on Mount Olympus to the confines of cultural history. Science expands our effective, if not necessarily our physical, biological bandwidth, and thus captures, making understandable, realities once thought the domain of imagined gods. But what of feeling? The ecstatic state I experience when witnessing the beauty of the world, is that a purely biological state, comprised of hormones and DNA? Or do we assign to that feeling, which can be difficult to explain, a higher meaning because of our inability to define it precisely enough? And, in doing so, are we not following in the path of the ancient Greeks who assigned to extra-human beings responsibility for natural events? So, I am not sure I am buying in to Swimme’s views.

It is, though, something, to pique the interest of people like myself who have rejected most forms of organized religion, particularly those that focus on a human-like all-powerful being, (see George Carlin’s routine re this. I’m with George.) but who hold open a lane for a greater, a different understanding of all reality. Where is the line between the material and the spiritual? How did we come to be here? Evolution provides plenty to explain that. But we still get back to a linear understanding of time as an impasse. If the (our) universe began with the big bang, then what came before? Einstein showed with his special theory of relativity that time is not so fixed a concept as we’d thought. Things operate at different speeds, relative to each other, depending on distance and speed. Who is to say that there might not be more fungability to our understanding of time, maybe even radically so? In a way, this is what Swimme is on about, ways of looking at our broader reality, at our origins and ongoing evolution, (not just the evolution of our species, but of the universe itself) through other, more experiential perspectives, (a new Gnosticism?) while still including science.

Humans have expressed their faith in a great variety of symbols, many of which have inspired me at one time or another. But today, if you ask for the foundation of my faith, I would say the stone cliffs of the Hudson River Palisades.

Overall I found this book brain candy of the first order. Take it as a survey-course primer for the theory he propounds. There are many videos available on-line for those interested in going beyond Cosmo 101. So, Is cosmogenesis one of the ten greatest ideas in human history as is claimed here? That is above my pay grade. Some of the notions presented here seemed a bit much, but there was enough that was worth considering that made this a satisfying, intriguing read. Suffice it to say that it is a fascinating take on, well, everything, and can be counted on to give your gray cells, comprised of materials that have been around for 14 billion years, a hearty jiggle at the very least.

Everything is up in the air. We are living in a deranged world where nihilism dominates every major state. The contest today is for the next world philosophy.

I received a hardcover of Cosmogenesis from Counterpoint in return for a fair review.

Items of Interest from the author
—– The Third Story of the Universe
—–A Great Leap in Being – 28:56
—–Human Energy – Introduction to the Noosphere: The Planetary Minds
—–Journey of the Universe