Nineteen Ways of Looking at Consciousness by Patrick House 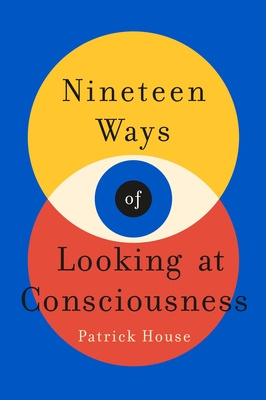 The brain…is a thrift-store bin of evolutionary hacks Russian-dolled into a watery, salty piñata we call a head.

…consciousness is not something passed on or recycled–like single molecules of water, which are retained as they move about the earth as ice, water, or dew–from one living creature to the next…instead consciousness should be grown from “scratch” with only a few well-timed molecular parts from plans laid out. It is not drawn from a recycled tap of special kinds of cells or dredged from the vein of free will. No, the darn thing grows. From its own rules. All by itself. And we have no idea how or why.

When I was still a programmer it was necessary to understand the many characteristics of, and rules about using, the objects that we would place on the screen in an application. Under what conditions did one appear? Physical dimensions, like width and height. Does it have a borderline around it? How wide is that line? Does it have a background color? How about a foreground color? Can it display images, text, both? Where does it get its information, keyboard entry, internal calculation? and on and on and on. Fairly simple and straightforward once one knows how it works. But consider the human brain, with billions of neurons, and a nearly infinite possible range of interactions among them. Somehow, within that biological organ, there is a thing we refer to as consciousness. We are who and what we are, and saying so, thinking so, makes us conscious, at the very least. But how did this gelatinous, gross substance, come to develop awareness of self? And just what is consciousness, anyway? Patrick House, a Ph.D. neuroscientist, researcher and writer, offers a wide range of looks at what consciousness might be, mostly by looking at details of the brain. How do the characteristics of zombie food come to be, and how do they combine to create something far greater than a tasty meal for the hungry dead? He looks at many of the currently popular ideas that try to get a handle on the fog that is consciousness.

The book is a collection of possible mechanisms, histories, observations, data, and theories of consciousness told nineteen different ways, as translations of a few moments described in a one-page scientific paper in Nature, published in 1998, titled “Electric Current Stimulates Laughter.” The idea is an homage to a short book of poetry and criticism, Nineteen Ways of Looking at Wang Wei, which takes the poem “Deer Park” by Wang Wei and analyzes nineteen different translations of it in the centuries since it was originally written.

He points out more than once that our brains did not emerge in an instant, all sparkling, from the build-a-brain factory. They evolved, from the very first living cell, so at each step of the evolutionary ladder, whatever traits favored survival and reproduction became dominant, pushing prior adaptations into the DNA equivalent of attic storage. Some of the accretion of the prior adaptations may vanish over time, but bags of the stuff are still lying about.

In tracing how our brains evolved, He points out qualities, like the brain’s need for cadence, and timekeeping, shows that language and action are comparable products of the brain and reports on how speech arose from systems that governed movement. He looks at the brain’s mission of preventing our bodies from losing 1.5 degrees of internal temperature, at how we map out the sensate terrain around us, and at the significance of size in brain complexity.

Imagery runs rampant. There is a chapter on the pinball machine as an appropriate metaphor for consciousness. It was a TILT for me. But ineffective chapters like that one are rare, and can be quickly forgotten when the next chapter offers another fascinating perspective, and bit of evolutionary vision. Another, more effective image, was scientists looking for “surface features” of the brain that might tell us where consciousness lies, like geologists surveying terrain to identify likely ore locations.

Throughout the book House refers to a patient, referred to as Anna, who, while having neurosurgery, had her brain poked in various locations by the surgeon, testing out the function of different parts of her gray matter, prompting some unexpected results. Grounding much of the discussion in the experience of an actual person helped make the material more digestible.

As I read, questions kept popping up like synapses flashing a signal to the next synapse. First of all is a definition of consciousness. What is it? How is it defined? Probably the most we can hope for is to infer its existence from externalities, in the same way that astrophysicists can infer the presence of a black hole by measuring the light coming from nearby objects, without ever being able to actually see the black hole, itself. Is there a measurable range of consciousness? Is entity #1 more or less conscious than entity #2. (Man, that is one seriously self-aware tree) How might we measure such a thing? This is actually addressed in one of the chapters. I would have been interested in more on consciousness in the world of Artificial Intelligence. If programmers put together a sufficient volume of code, with a vast array of memory and data, might there be a possibility of self-awareness? What would it take?

For an item on an electronic screen, one can find out the specific characteristics that comprise it. And with that knowledge, check against a list of possible items it might be. It might be a text-box, or a drop-down menu, or a check-box, a button that triggers an action when clicked. But with the brain, while we can compile a considerable list of characteristics, there is not really a list against we can check those things to arrive at a clear conclusion. Oh yeah, any entity, biological or electronic, that possesses at least some number of certain core characteristics, can be considered to be conscious. Nope, it does not work that way.

I found by the end of the book that I had learned a fair bit about how brains evolved, which is always a wonderful experience, but was as uncertain at the end as at the beginning about just what consciousness is. I expect that House shares that leaning, to at least some degree.

There is no one such thing as “consciousness,” and the attempt to study it as a singular phenomenon will go nowhere.

But he does suggest that consciousness exists as a range of experiences rather than as a singular entity with firmly defined borders. It is a fascinating read, even if the core definition is lacking. One thing is for sure, it is brain candy of the first order whether you are self-aware or not.

And just for fun, for next week’s class, be prepared to discuss the difference between consciousness and the mind.

I received an ARE of Nineteen Ways of Looking at Consciousness from St. Martin’s Press in return for a fair review. Thanks, folks.

Filed under Non-fiction, Psychology and the Brain, Science and Nature