Yeah I know, there are two reactions to the notion of eels. First there is fear when one thinks of large, oceanic moray eels popping up out of some hidden coral niche to snatch a chunk out of your leg as you swim by. Second is “eeewww.” This is for the slippery guys who inhabit rivers, streams and extreme restaurants. Get over it.

James Prosek’s Eels is a fascinating look at an unappreciated creature. Did you know that scads of eels migrate from freshwater streams and rivers to mid-ocean to spawn? The location of the Pacific spawning ground is still unknown, (or at least unrevealed) but they head for the Sargasso Sea in the Atlantic. The author attempted to keep eels once, but their wanderlust resulted in them damaging themselves trying to escape. The urge to get back to the sea can also result in the major YouTube wet dream of giant eel balls (no, Beavis, not oversized fish nads, but masses of intertwined critters, cavorting in a movable orgy) rolling their way over dry land to get to the ocean. It is probably a good idea to step aside.

Prosek offers wonderful profiles of people for whom the eel is a major part of their lives, scientists, eelers, eco-warriers, South Sea Islanders. Ray Turner is a back-woods sort in Pennsylvania who makes a living as an eeler from a year’s worth of work and a few nights of harvest. A large part of the book looks at the significance of the eel in Maori culture. This is quite eye-opening. Think buffalo and Plains Indians. He writes also of how the Japanese regard the eel and manages to find a flight to the very remote Micronesian island of Pohnpei, mentioned to him by a few of the people he interviewed for the book. It is a place of great significance in eel legend. Eels are reputed to be able to make sounds like barking dogs and crying babies, and are ascribed magical powers beyond that. Way cool. He also looks at the activities of conservationists who are trying to spare these remarkable creatures from extinction. 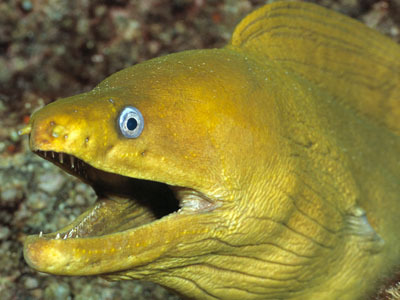 a Moray eel from howstuffworks.com – not just another pretty face

Catches of eels are plummeting worldwide, the result of dams, overfishing, and the usual human fouling of natural waterways, increasing the need for information about the eel life-cycle so that this important fish (yes, eels are fish) can be preserved.

Prosek’s book is, in short, great fun. By the time I finished I could honestly say, “I’ve been slimed,” but in a good way. This book was released in 2009. It is definitely worth your while trying to locate a copy and when you do, don’t let your chance to learn about these fascinating creatures slip away.

There is a video on PBS featuring Prosek, The Mystery of Eels that is definitely worth a look, although it is refreshing to see that there is something that this renaissance man, (yeah, he plays music too, in addition to being an accomplished artist and scientist) is not great at, voice-overs. The content and visuals more than make up for Prosek’s stolid delivery.