Blaze me a Sun by Christoffer Carson 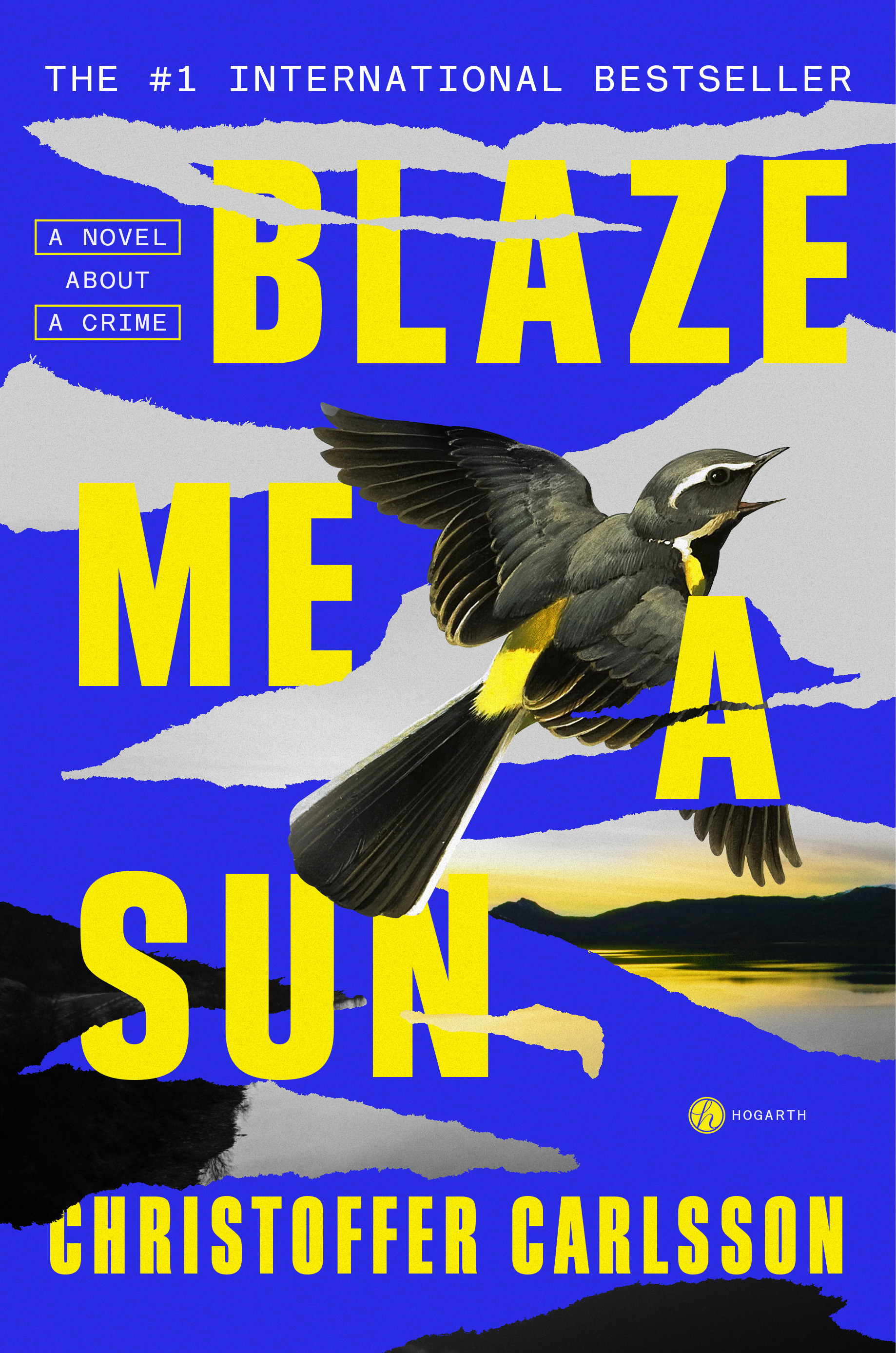 I raped a woman in a car. It’s near Tiarp Farm. A brief silence followed. Then: I’m going to do it again. Bye.

Monstrousness was always sleeping right beneath the surface, just out of sight.

1986 – A terrible crime in an out-of-the-way place. A young woman is brutally raped and murdered in her own car. It might have gotten a bit more national attention had there not been another crime that night, the murder of Swedish Prime Minister Olof Palme. The attention would have been merited, as the killer taunted the police with a phone call, boasting of his deed and promising more of the same. He will become known as Tiarp Man. The case falls to Sven Jörgensson. It will consume him. Blaze Me a Sun has a frame structure. It opens in 2019, with a writer looking into the famous crimes that had taken place in Halland County, in southern Sweden. He is a local, who has been away for a long time, but felt a need to return home. Those who knew him as a kid call him Moth. The primary story is the one that Moth researches and tells. Then we go back to Moth for the final fifth (or so) of the novel.

The book is divided into multiple periods. The first (inside the frame) is 1986, when the first crimes take place. Next is 1988 when the national police take over the investigation. In 1991, there are more violent crimes. Is it the same person? 2019 is when Moth is up front as our narrator, at the beginning and end of the novel.

I was reminded of the true-crime format, in which the host/narrator walks you through all the details of one or multiple crimes, then offers the reveal at the end. But the first-person perspective of the frame is replaced in the core here by a third-person-omniscient perspective. At the back end of the story, the narrator takes center stage again, leading us through his further inquiries.

Mostly, we follow Sven as he looks into several murders and one near-killing. As with the Palme murder, finding the perpetrator is a fraught, frustrating job. Evidence is scarce and the struggle to identify the perpetrator wears down the patience of both Sven and his superiors over time. He is an intrepid detective, someone who takes his responsibility to the victims and their families to heart. He thinks of them every day, even long after he is no longer on the case, even after he is retired. Sven is an easy character to pull for, mostly. A white knight on a worthy quest, but there is tarnish on that armor as well. Sven is far from purely benign.

Even heroes can make mistakes. The dream of a spotless past is, after all, only a dream. No one makes it through unmarked. We have to learn to live with it. If we can.

One element that struck me was that we come to think of the victims by their first names, as Sven does. It gives them a bit of extra presence that enhances our feel for Sven’s struggles, his determination to see justice done.

Even Sven’s son, Vidar, as an adult, gets caught up in the complications, the reverberations of the case. Families are a major focus of the book. The crimes have both immediate and long-term impact on the people who must survive the horrific loss of a loved one. Single crimes echo through time to generate multiple waves of misery and destruction. People come to learn things about those to whom they are the closest. You can see why some folks might be jarred learning those things. The truth doesn’t just hurt, it can break your psychic bones, change your direction in life, make you into a different person than you were. Sven’s relationship with Vidar is both loving and strained, a source of tension that carries through the story.

Carlsson links the Tiarp Man murders to the Palme assassination thematically, rather than concretely.

When the prime minister was shot and the shooter was never more than a shadow heading up the stairs into the dim light of David Bagares Gata, it unleashed something. Distaste. A rage that no one could quite control.
From opinion pages and kitchen tables came an indignant clamor over police and politics, criminality and immigrants, the wretched creature that had become Sweden and one’s own reflection in the mirror. It was clear now. The country could have come through anything unscathed—anything but this. The youthful boy with his smiling eyes, a mother-in-law’s dream who turned out to be a murdering monster up there in the north: Maybe that’s us.
Of course this sort of thing leaves its mark on you. Of course it marks a country. How could it not?

Tiarp Man personified that for this part of Sweden. Things that remained unresolved for far too long. A sense of community comfort that was forever disrupted.

There is no real magical realism at work in this book, but Carlsson does offer up an omen in the form of a local superstition.

As spring arrived, the village came to life. Everything seemed to shimmer, and the colors grew so vivid. Sweet days awaited.
The first white wagtail sighting also brought a moment of uncertainty. We learned to be very cautious. If you saw the bird from the back, which you almost always did, it meant happiness and good fortune. But on those rare instances in which you first happened to catch sight of it from the front, and got a good look at the black spot on its tiny breast, it was a bad omen: Misfortune and sorrow lay ahead.

Carlsson knows a bit about police work and crime. Mom was the Swedish equivalent of a 911 dispatcher. And the author’s day job is putting his Criminology PhD to use as a college professor, and writer of professional papers on criminology. His father was an auto mechanic, a job he hands off to Moth’s father in the book. Carlsson is from the area in which these crimes take place. I suppose only those who know the area can opine on whether he presented it accurately.

Criminology taught me the rough brutal truths about crime: it’s dirty, bloody, messy, painful, raw, costs a lot, and, sometimes, it’s beyond meaning in any reasonable sense of that term. – From Crimereads article

I had only two real issues with the book. There is a gap between some of the crimes that is not really explained, and an authorial disinclination to go into the killer’s motivations. If you are ok with that, then this one should satisfy. It enhances a procedural mystery with a look at family, questioning how well we really know those closest to us, and the limits of what one might do for loved ones. It adds a take on the sense of the place and the times. Best of all, there are some excellent twists.

The one she asks for light is also the one who will bring darkness. Like the face of Janus.

I received a digital ARE of Blaze Me a Sun from Hogarth in return for a fair review. Tack, gott folk, and thanks to NetGalley for facilitating.

Blaze Me A Sun is Carlsson’s ninth book and American debut.

Interview
—–Penguin Random House – Book Club Kit – there is an excellent interview in this
—–Booktopia – An award-winning crime writer’s advice for aspiring authors. by Anastasia Hadjidemetri – from 2017

Could the worst of crimes be devoid of meaning? Strange things happen all the time, every day, and we don’t think too much of them because they don’t affect us that deeply. They are just “coincidences” or something else, depending on what you believe in. Criminology taught me the rough brutal truths about crime: it’s dirty, bloody, messy, painful, raw, costs a lot, and, sometimes, it’s beyond meaning in any reasonable sense of that term.