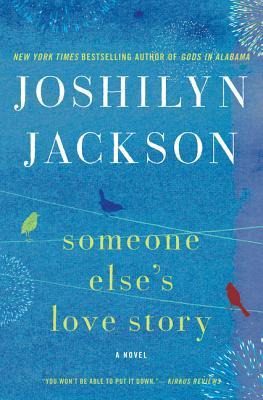 I guarantee that when you reach the end of this novel the sound you hear will be coming from your own mouth, “Awwwwwwwwww.”

The last book I read and reviewed was David Vann’s magnificent Goat Mountain. Outstanding stuff, heavy with content, violent, dark. Someone Else’s Love Story, while not the opposite, is certainly worlds away. An antidote. Maybe chicken feathers for the soul.

The book opens with a poem by Emily Dickenson:

Keep it in mind. But back to beginnings. Consider the first actual paragraph

I fell in love with William Ashe at gunpoint, in a Circle K. It was on a Friday afternoon at the tail end of a Georgia summer so ungodly hot the air felt like it had been boiled red. We were both staring down the barrel of an ancient, creaky .32 that could kill us just as dead as a really nice gun could.

Hooked yet? I was. And glad of it.

Shandi is 21, the mother of Natty, a precocious three-year-old. Her bff, Walcott, is helping her move to an apartment her father keeps in Atlanta. She is a familiar sort, a good-hearted everygal of a single mother, except stuck between her long-divorced and still contentious Jewish father (remarried with three more kids) and Christian, still-single, bitter mother. Stopping en route at a convenience store, her journey is interrupted when a gunman holds the place up, shooting a cop and taking those present hostage. Good thing there is a hulk of a guy there, football-player heft, and with brains to boot, a godlike hero who makes sure neither Shandi nor Natty come to harm.

Of course William Ashe has issues of his own, and maybe he has other reasons for risking taking a bullet than solely to protect a damsel and child in distress. Maybe he is choosing his own destiny, on the anniversary of a terrible event in his life.

Destiny does figure large in this story, and it is the consideration of this and other underlying concerns that gives the book greater heft than if it were a simple rom-com. Religion figures as well. It is no accident that Jackson, for example, uses “ungodly hot” in her opening paragraph. It could just as easily have been unbearably or unspeakably. There is a wide range of content here that relates to god. There is a virgin birth, no, really, a resurrection, miracles of one sort and another, sacrifice, concern with mythological beings like Norse gods and animated anthropomorphic creatures from Jewish legend. The book also looks at love, not just between the plus and minus poles of human magnetism, but between humans and god, between friends, between parents and children.

There are some things you will want to note as they pop up in the book. Birdhouses, birds and feathers flutter into view from time to time. I just bet they stand for something. Flowers and flower beds receive similar treatment, always raising Eden-ic possibilities. Ditto fireworks of one kind and another as an expression of love.

There is an investigation here of a back-story crime. It is handled with considerable nuance and maturity. Doubtless, there will be some who take offense at how this is treated. I thought it was excellently done. There is also a jaw-dropping (and wonderful) twist late in the book.

I was reminded very much of the feel of Silver Linings Playbook. Shandi, (can Jennifer Lawrence play her, pleeeeeease) William, and Walcott will win your heart. These are lovely characters, people worth caring about, facing difficult decisions and looking at core elements of life. Someone Else’s Love Story is about all sorts of love stories. It is about doing the right thing and struggling to figure out what that actually is. And it is lovingly and beautifully told. One right thing you can do is read this book. It may not be a religious experience for you, but I guarantee that it will be uplifting and leave your spirit feeling light as a feather. This is a lovely, charming book.

PS – I really hope they keep the cover art that is on the ARE I read. The image of birds, along with a few bursts of fireworks, is nothing short of perfect.

One response to “Someone Else’s Love Story by Joshilyn Jackson”