The Ocean at the End of the Lane by Neil Gaiman

I turned 7 early in third grade. It was a memorable school year because I had for a teacher a nun with a reputation. Sister Evangelista was about 5 foot nuthin’, and symmetrical. If the what’s black and white, black and white, black and white – a nun rolling down a hill joke were applied to her you would have needed a lot more black-and-whites, as her spherical shape would have kept her rolling a long time. It earned her the nickname Cannonball. She was notorious, not only for her distinctive dimensions, but for having a particularly foul temper. Her starched garb also pinched her face into a state of permanent floridity and pursed her lips into a particularly fish-like shape. It was not a happy year for me at school. There would be more than one instance of raised voices, and more than one rap across the hands with yardsticks. I was even banned from the classroom for a spell, to wander the halls for hours, unaccompanied. But I somehow knew that eventually I would be a third grader no longer and would escape the sharpened claws and flapping habit of this creature. She was unpleasant, for sure, but she did not present an existential threat. 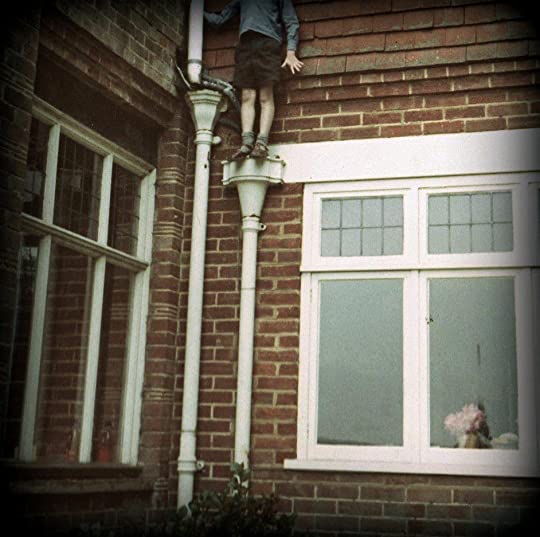 Neil on a drainpipe as a lad – from his FB page

When the unnamed narrator of Neil Gaiman’s book, The Ocean at the End of the Lane, turns 7, he has troubles of his own. It begins with zero attendance at his birthday party. The family comes on some hard times and must take in boarders. The boy is given a kitten, Fluffy, to ease the loss of his room, but the pet falls victim to a cab, arriving with a South African opal miner, the latest paying resident. Not long after, the miner takes the family car. It is found soon after, at the end of a nearby lane, with a body in the back seat, and a hose running from the tail pipe to the driver’s window. At the scene, the boy meets an eleven-year-old girl, Lettie Hempstock, who takes charge of him, and brings him to her family’s farm, which borders the lane. And so begins a beautiful friendship. (Members of the extended Hempstock family, btw, turn up in several other Gaiman books)

Lettie lives with her mother and grandmother. When strange events begin to erupt in the area–the boy’s sister is assaulted by flung coins, the boy wakes up choking on a coin, and other strangeness afflicts neighbors–Lettie seems to know what is causing them. She is sent to take care of it and brings the boy, her little friend, along. They travel across the Hempstock property and into what seems another world, (mentions of Narnia and Alice in Wonderland, among others, let us know that lines will be crossed) a place that has some threatening inhabitants. Lettie confronts the troublemaker, but the boy reacts to an event instead of thinking and disobeys her lone order, to keep hold of her hand. That is when the real trouble begins.

The boy is far too young for this to be a coming of age tale, but a central element of horror, whether of the Freddie Krueger, Nurse Ratched (or Sister Evangelista) variety, or the flapping beast central to Gaiman’s tale, is one’s helplessness before a greater, and ill-intentioned power. Although he doesn’t characterize his intentions as horror-mongering, Gaiman has laid out what he was up to in writing the book.

It was meant to be just about looking out at the world through the kind of eyes that I had when I was 7, from the kind of landscape that I lived in when I was 7. And then it just didn’t quite stop. I kept writing it, and it wasn’t until I got to the end that I realized I’d actually written a novel. … I thought — it’s really not a kids’ story — and one of the biggest reasons it’s not a kids’ story is, I feel that good kids’ stories are all about hope. In the case of Ocean at the End of the Lane, it’s a book about helplessness. It’s a book about family, it’s a book about being 7 in a world of people who are bigger than you, and more dangerous, and stepping into territory that you don’t entirely understand.

Gaiman was aware that his work might appeal to young readers for which is it not intended. He said that he deliberately made the first few chapters of the book dull as a way to dissuade younger readers, who would be put off by that and disinclined to continue on to the juicy bits.

The world the young boy faces may not be understandable. There is just too much to take in and Gaiman captures that element of childhood quite well.

Changes for the boy at home include the antithesis of Mary Poppins, in the form of one Ursula Monkton, who seems to have arrived on an ill wind, with the added bonus of her having designs on the boy’s father. Adults overall seem pretty careless. But there is some balance in this universe. Lettie’s family seems beyond time itself, a bright light in the darkness, welcoming, comforting, nurturing. And then there’s the ocean. Looks like a pond to you or me, but it has qualities quite unlike other bodies of water. As in his earlier American Gods, there are things that have been brought to this newer world from the place its residents once occupied. You may not be able to go home again, but what if you could take it with you? (Also a theme in American Gods) 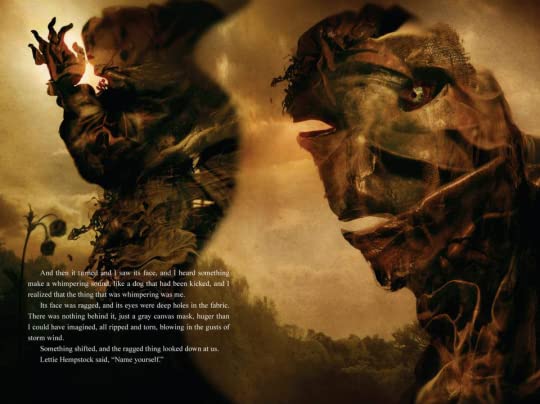 Gaiman says he usually writes for himself. One thing that was different about this book was that he was writing for someone else. His wife, musician Amanda Palmer, was off in Australia making an album. Where you or I might send along daily, or weekly notes of what was going on, Gaiman sent something else

I will tell my wife, by making stuff up, kind of what it was like to be me when I was seven, from the inside of my head, not in the real world, then put it in the actual landscape that I grew up in.

There really had been a boarder who killed himself in the family ride. Like his young hero, Gaiman climbed drainpipes. There really was a farm down the lane that had been recorded in the DomesDay Book.

And as with such enterprises he did not have a large frame work constructed. It was “like driving at night through the fog” – he knew “three or five pages ahead what would happen”, but no further.

There is some material here that rankled a bit. The substitute parent trope had been used to good effect in Coraline and manifests in many of the Disney animated classics, evil stepmothers in Cinderella, Snow White and the like. Ditto here. Maybe going to that well one time too many? And is dad really that dim? But there is also a nice diversity of conceptual toys at work. The flapping baddie was fun. The magical ocean and ageless Hemplocks are also very engaging. The nothingness created by the creatures referred to, among other things, as hunger birds, reminded me of Stephen King’s Langoliers, also the Nothing of the Never-Ending Story and the Dark Thing of a Wrinkle in Time. Might the three Hemplocks serve as a sort of feminine Holy Trinity? There is a wormhole that involves an actual…you know…worm, which made me smile for a long time. And any time there is a dip into water, one must ponder things baptismal, rebirth, either literal or spiritual.

Letting go is what so much of growing up is about. It is the very thing that must be done in order to be able to grow, to live one’s own life. But sometimes letting go has the opposite effect, and can place you in peril, particularly when you are only 7 and not ready for the consequences. There is a lot in this short book on holding on, and letting go, and the price of both. There is a lot on doing what is right, on personal sacrifice, on permanence and the ephemeral, on remembering and forgetting.

The Ocean at the End of the Lane is a short novel. But do not let go of the notion that this is a book for adults. The ocean in question may look to be a pond, but do not be deceived. Jump in. The water’s fine, and deep.

A wonderful article on Gaiman in the January 25, 2010 issue of The New Yorker

An excellent audio interview by Jian Ghomeshi of Canadian Broadcasting