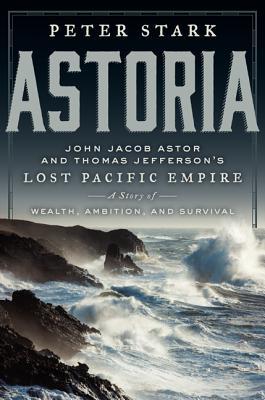 Astoria is a tale of two journeys. It is an adventure of the highest order, and with Peter Stark as your guide, it is one of the best non-fiction books you will read for a very long time.

In 1803, the Louisiana Purchase had brought the young United States all the land draining into the Mississippi (at least according to our side of the story). The President wanted to know all he could about what he had bought, particularly as there were still some disagreements going on over the breadth of the purchase. Thus the Lewis and Clarke Expedition, in 1804, and the later Red River Expedition and Pike Expedition provided Jefferson the information about this new land he needed to negotiate with France, and others. But what lay beyond? Opportunity, resources, and vast swaths of land.

In the early 1800s, John Jacob Astor was one of the richest men of his time. He had made a fortune trading North American furs in Europe, and had begun trading with China as well. What he had in mind was to take advantage of the fur resources of the Northwest and establish a triangle trade. Northwest furs to the Orient, porcelain from China to London and New York and other goods from there back to the Northwest. His aim was to monopolize trading on the Pacific Rim, at a time when Lewis and Clark had been across the country only a few years prior. He involved Jefferson, who also had a more global vision than other men of the day. The Northwest was unclaimed by westerners, (no thought was given, per usual, to the native people who were actually living there) and was considered available for the taking. For Astor it was to be a base for establishing a trade monopoly. Jefferson saw an opportunity to spread democracy to the west coast, and encouraged Astor. To accomplish his aim, it would be necessary for Astor to establish a base of operations. He decided on the area near the mouth of the Columbia River. He put together two groups of men to reach the spot, one to travel by sea the other to cross the continent by land. It is their adventures that form the bulk of the story, and what a story it is.

Were this a novel, the dueling road trips would both be tales of self-discovery. This is a case where reality exceeds fiction. The character of many of the travelers is revealed in how they handle the extreme stresses to which they are subjected. Following the development, or revelation of their characters, for good or ill, is one of the great pleasures to be had in reading Astoria.

The ship Astor sent was the Tonquin, a 290 ton bark. He selected as its captain the young (31) US Navy lieutenant Jonathan Thorn. Thorn had been a military hero, serving with distinction in the Barbary Wars, and Astor wanted someone who could fend off potential attacks. Our friends across the pond, engaged in a tiff with Napoleon, had taken to stopping vessels in international waters and shanghaiing sailors or passengers who were British subjects to fight the French. Rule Britannia was not being sung by the crews of American-flag ships. This aquatic stop-and-frisk imposition would be one of the causes of the War of 1812. 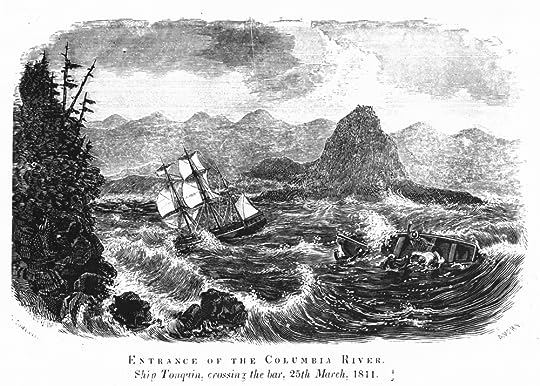 An engraving of the Tonquin at the entrance to the Columbia, from the Oregon historical Society

While the captain was the right sort for dealing with a military crew and worked well within the rigid specifications of a military regimen, he was not so adept at controlling a crew that was not exactly military, and most of whom were not even American citizens. Also aboard were shareholders in Astor’s company, a dozen clerks, four tradesmen and a baker’s dozen rough and tumble voyageurs from what is now Canada. He also had a lot to learn about dealing with locals and trade negotiating. The ship was challenged to endure near continual onslaught, whether from the elements, a pursuing ship, or the captain’s personality. He got along so well with the crew that they took to speaking with each other in their native tongues, which Thorn did not speak. And more than once he intentionally set sail while tardy returnees were still on land. His rigidity made for a dark passage. And his sometimes cavalier attitude towards the survival of his own men is breathtaking. He might be charged with depraved indifference today. Along with a certain Captain Queeg, I was reminded of a scene from Monty Python and the Holy Grail . Consider here Thorn as the king (although Arthur seems quite a bit less rigid) and the castle residents as his crew.

The Overland Party was led by Wilson Price Hunt, a young (27) businessman who had worked with fur-traders in St Louis. A polar opposite to Thorn, Hunt was someone who sought, above all else, to construct consensus. The Overland group did not exactly have a roadmap to their destination. The route they took followed in the footsteps of Lewis and Clark for a time, but they had to carve a new trail at a certain point, into completely unknown and not terribly welcoming territory. 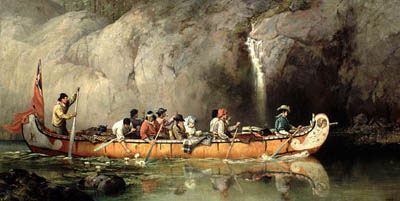 Despite the term Overland, much of the Overland Party’s travel was done by water, on rivers. This is the sort of conveyance the Voyageurs were accustomed to paddling – the image is from the Canadian Encyclopedia

Far too much of their river time was spent in water of this sort.

From the Susquehanna Chapter of the Wooden Canoe Heritage Association

In a blog entry on Stark’s site, he writes

The big Montreal freight canoes could be as long as 40 feet, yet made of lightweight birchbark, and capable of carrying three or four tons of supplies or furs, propelled by ten or twelve voyageurs.

It is amazing how many times the Overland Party was assisted by Native Americans. But there were also plenty of locals who were not exactly happy to see them. How the Overland group interact with the natives they encounter is a significant element of the story. How they survived, (or didn’t) is the stuff of adventure yarns. How Hunt herded his pack of cats (and sometimes didn’t) is very impressive.

This was definitely not a crew to belong to if you walked on four limbs. Resources became extremely scarce, and desperate measures had to be taken. There is even a hint that starving sojourners might have partaken of the special meat.

Some characters stand out here. My favorite is Marie Dorian, a native woman who had married a Metis named Pierre. He dragged her along on the Overland trek, along with her two small (2 and 4 year old) children even thought she was pregnant at the time. Hers is a particularly poignant profile in courage and endurance. There are a few legendary names that folks in this tale encounter, including Sacagawea and Daniel Boone.

The story is the thing here, and focus remains on the travails of the travelers. But there are also excellent, informative asides, relevant to the tale, about various and sundry things. One tells why sea otter pelts are so highly valued. Another looks into the societal composition of some native groups, looking at their sources of wealth and social organization. Consideration is given to how the locals react to newcomers, and why, citing past experiences. There is also ongoing consideration for the impact on the enterprise of potential and then kinetic British-US hostilities.

We know today that the nation did indeed expand to the West Coast, but the details are plenty soft in your recollections, I will wager. It might not even be that you (or I) forgot, but that we never really knew. Astoria offers an excellent way to mend that hole. It will excite you in the process. This is real-life adventuring, life and death on the line, people you will admire and scoundrels who will make you want to hiss. What a fun read, and what an informative book. It may or may not be a far, far better read than you have ever had before, but I cannot urge you strongly enough to climb, trek, paddle or sail to your nearest book-trading post. This journey to Astoria is very definitely a trip worth taking.

PS – the volume I worked from was an ARE, so did not have all the materials expected to be in the final hardcover edition. Spaces were left for illustrations but I did not get to see those. One thing I did see is that there is a very helpful Cast of Characters section at the front of the book, and another at the back called The Fate of the Astorians, which I thought was pretty cool.

Astoria will be released in March 2014

Here is a link to the Wiki entry for the Tonquin – but if you have not yet read the book, be warned that there is very spoilerish info there.

Although I expect the physique of this re-enactor might not match the bulkier torsos of actual voyageurs, this might give you an idea of what was considered proper attire for the proud paddlers 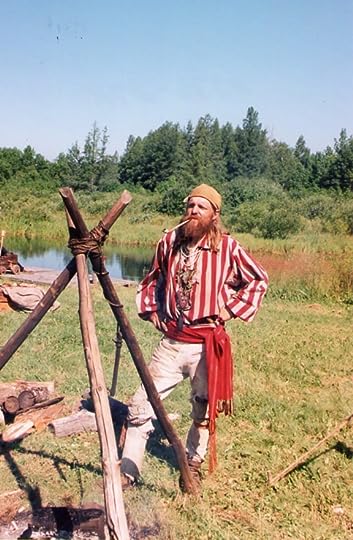 So there it is. I was wondering what had happened to that shirt. For more on voyageurs check out this piece from McGill University

Astor could not have suspected that Astoria would become a familiar site in many films. Here is a list of a bunch. It includes The Goonies, Short Circuit, Kindergarten Cop, The Black Stallion and plenty more.

John Day was a member of the Overland Party. He does run into a bit of trouble at the mouth of what was then the Mah-hah River, along the Columbia. It was later renamed for him. A geologically notable site through which that river wanders was also named for him. Day himself was never near there. I have had the pleasure and there are a few shots in my Northwest set on Flickr that offer a glimpse of the striking landscape.

Among the places the Overland Party encountered, one that held great hope for them was seeing one particular Mountain chain.

The three mountains were hailed by the travelers, Wilson Price Hunt, weighted by his Yankee reserve and need for geographic grounding in this unmapped wilderness, called them the Pilot Knobs. The buoyant French-Canadian voyageurs called them as they saw them, the Trois Tetons,–“the three breasts”. It’s the voyageurs’ name, which has stuck for these mountains that tower above today’s Jackson Hole, Wyoming.

Also, that image I use as my GR avatar to spare you the crypt-worthy image of my ancient puss is from the Tetons as well.

Today’s city of Astoria, Oregon has a nice site

Sadly, while I have been to Astoria, and even visited its Astor Column, it was while my wife and I were in a bit of a rush, heading back to our temporary camp in Portland from a trip to the coast. Did not get there until far too late in the day to get any decent photographs. Then, assisted by considerable fog, we inadvertently took a scenic route that featured a seemingly endless series of blind turns, and was inhabited by large numbers of bulky four-legged creatures standing in the middle of the road and appearing only moments before impact…well, in my white-knuckled imagination, anyway. Having read the book, I would dearly love to return to Astoria, in daylight, and have much more of a clue than I had then what it was all about.