Tag Archives: The Wind is not a River

The Wind is not a River by Brian Payton

The Aleutian Archipelago: fourteen large and fifty-five small volcanic islands, strung over more than a thousand miles. Somewhere there, he’s alive. On good days, her faith overshadows doubt. And what is faith but belief independent of proof, a conviction that stands on its own. To this she knows John would roll his eyes. The thought makes her smile.

John Easley is missing. Shaken by the death of his RCAF brother over the English Channel, the 38-year-old writer determines to bring information to the people at home about what is really happening in the war. It seems so much more meaningful to him than reporting on bird migration for National Geographic. He feels he owes Warren at least that much. His wife, Helen, disagrees. Their last words before he took off yet again on a war-reporting mission were harsh, and final.

She is facing challenges of her own. Her father is not well, and she wants to be there for him. She is struggling with not having much by way of work skills and is stuck at a low-level job. John’s absence gnaws at her until, realizing that she still loves him, she decides to do everything in her power to find and bring him home. John had bailed out from a damaged aircraft over the Japanese occupied island of Attu. He struggles to survive in the treeless tundra. Helen struggles to find him.

Brian Payton – from his site

The story flips back and forth between the challenges John and Helen face. John has to figure out how to stay alive, and hidden from the occupying army. I was reminded of David Malouf’s excellent book, An Imaginary Life , about another person isolated in an arctic realm. Helen must figure out how to find John. Both face daunting tasks.

The Wind is a powerful, beautifully written, heart-wrenching love story, but sails well past any simple notions of romance. There is struggle here with the imagined instead of the actual partner. Does there come a time when imagination, whether fed by love or not, loses its sharp focus? How can love survive absence of the other? How far can love take a person when the odds are overwhelmingly against? Can love keep someone alive?

In addition to the compelling tale of a reverse Odyssey, one in which Penelope goes in search of Ulysses, Payton offers us considerable payload in his look at a little-seen part of WW II history. For those who thought that the last time the USA endured the landing of foreign troops was during the War of 1812, you have another think coming. Japan captured and occupied several of the Aleutian islands, and had plans to advance farther. News media of the time was subject to government censorship and the political leaders did not want it known that a foreign power had successfully invaded US territory. We are given a look at a remote and challenging aspect of the war. Along those lines Payton drops in bits of information. For instance, because the land was challenging as a place on which to build strong flat surfaces, a runway was constructed of metal matting cinched together. Another scene shows Americans dropping off planes for Soviet pilots to fly back to the USSR and use in the war on Hitler. We also get a look at the USO, 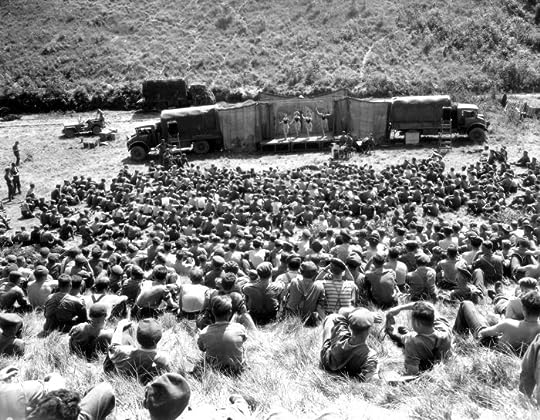 The USO sees action – from strangemilitary.com

and, chillingly, the treatment of local evacuees by the US military. So, food for the brain as well as the heart.

As for gripes, I have two. While the cover art is beautiful, it fails to let the reader know what this book is all about, focusing as it does on a single early moment in the story, and ignoring what follows. I was not all that thrilled with the ending. But that did not detract from the great joy that can be had reading this book. Your heart will get quite a workout. John Easley, a decent guy, is engaged in a prolonged life-and-death struggle, and Helen’s love takes on heroic dimensions. There is a large range of emotion from which to draw here. Uplift to be experienced, delight in beauty of various sorts, appreciation for the sacrifices of some, anger, sadness and disappointment as well. Bring your hankies. The love that Brian Payton portrays glows even brighter against the spare environment in which it is set.

Mention is made in the book about John Huston making a documentary of the military campaign in the Aleutians. Here is the film, Report from the Aleutians. It clocks in at 43:13.