The Story of Land and Sea by Katy Simpson Smith 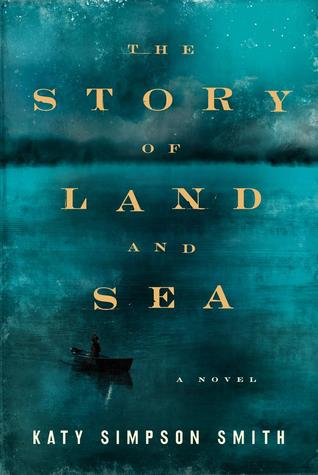 In 1793, ten-year-old Tabitha is smitten with the idea of the sea. Her father, John, an erstwhile pirate and soldier in the Continental Army, owns a shop in Beaufort, NC. Tab’s affection for the maritime may have to do with her mother, Helen. John and Helen had eloped, over her father’s objections, and sailed together under a black flag. But her father’s tales are all Tab has of her mother, who died giving birth to her. When she contracts yellow fever John is desperate to find a way to help his daughter.

…to save her from the graveyard he must take her to the sea. He took her mother once, and being on the water only made her bloom.

They board a ship bound for Bermuda. This does not sit well with her grandfather, who believes her chances are best ashore, and well prayed over. Asa owns a plantation, producing turpentine from considerable stands of pines. A religious sort, he is hell-bent on making sure that his legacy is carried forward. When his wife died in childbirth, he focused that need on his daughter. But his attempts to root her to his land failed when she fell in love with John, a man of not much family, but an excellent heart.

The story is told in three parts, beginning with Tabitha’s struggle. Part two goes back to Asa raising Helen, giving her a slave, Moll, for her birthday, and the complicated relationship between Moll and Helen. While the comparison falls very short, both Moll and Helen are chained to their roles in life. Both resent their restrictions. But only Helen can actually act on her desires without being scourged for it. Asa is chained to his land and his attitudes, unable to see past what is to what might be, and unwilling to see beyond self-serving adages to what is right, to ever loosen himself from his own bindings.

Part three returns to John and Asa, Moll, and her son, Davy. It goes into how each of the primary characters ultimately copes or tries to cope, with the challenges of their lives, their losses, and chances.

Katy Simpson Smith has more than enough background for undertaking a look at America in the late 18th century. Before she returned to school to get her MFA, she completed a doctorate in history, and has published an examination of motherhood, We Have Raised All of You: Motherhood in the South, 1750-1835, which covers the period on display in her novel. It was a hard knock life for women in late 18th century America. Not only was the risk from childbirth far greater than it is today, even past that life-threatening event women were treated as chattel. Not to the same extent as actual slaves, but to a significant degree.

He [Asa] had a possessiveness in him that encompassed his house, his land, his women

And he would use marriage as a way to shackle both his daughter and her slave to his land. And what of the reverberations of the lot of females to those around them? Increased peril for their children, for one. Strained existence for their survivors, both emotionally and materially. And various forms of torment as the storms that rise from imprisonment bring forth dark gales. Parents are taken from children and children are taken from parents by the foolishness of custom, the limitations of ignorance and the blind eye of fate.

Thematically there is a lot going on here. Property views figure large. Asa considers Helen a form of property and takes as little heed of her wishes as he does of those of her slave, Moll. Marriage and choice come in for some consideration. Within that larger theme, both Moll and Helen confront the conflict between who their respective owners want them to marry and what they want for themselves.

“I wouldn’t mind if I had some say in who I laid down with.” [says Helen’s slave, Moll]
Helen nods. She puts her chin in her hands, nodding. People want what isn’t given to them. And this is not sin, but hope.
What if God didn’t put us here to accept, but to struggle? Isn’t love itself built on that precise impossible hope?

It is also clear that love is not always allowed to be the greatest consideration in choosing a mate, or to define one’s relationship with a mate after the marriage is made.

“Do you miss your husband, Mrs Randolph?” He had died looking for free land in the frontier, shot through with a Cherokee arrow. His partner had buried him in the west and sent Mrs. Randolph his musket and his spectacles. The gun she keeps hung behind her cabin door, where all the little Randolphs know to find it.
“I mostly miss the money he brought in, to speak frankly. He was a good father to the little ones and did well by us, but there’s something rather nice about one’s own life. Making decisions without someone to tell you ‘no, best not do that.’ He never thought I could do much for myself.”
“We’re lucky to have you,” Helen says.
“There’s no telling what all I can do without him, miss.

There is a tautness to this relatively brief novel. The concept of Checkov’s gun is well implemented. A beaten slave in one scene is employed relevantly in another. A notion of escape by boat is recommended and no sooner done than an actual boat appears. Sometimes this seemed a bit too neat. As is the bludgeoning irony of Asa freeing a panicked bird that is trapped in his house, while denying freedom to enslaved humans.

On the first page of the novel, John interrupts Tabitha’s request for more information about her mother.

He looks down the hall at the shadows whipping across the slats and holds a finger to his lips. “Can you hear any birds?”

This certainly gives one the notion that birds might be related to souls of the dead, or shadows. Could be something else entirely of course. Birds might be functioning as a sort of Greek chorus. In any case, you might want to keep this in mind as you come across the many bird references throughout the book. Land references abound as well, as wood is noted many a time, particularly pine, and flowers.

The writing in The Story of Land and Sea is beautiful, moving, and insightful. The story begins:

On days in August when sea storms bite into the North Carolina coast, he drags a tick mattress into the hall and tells his daughter stories, true and false, about her mother. The wooden shutters clatter, and Tabitha folds blankets around them to build a softness for the storm. He always tells of their courting days, of her mother’s shyness. She looked like a straight tall pine from a distance, only when he got close could he see her trembling.
“Was she scared?”
“Happy,” John says. “We were both happy.”

There is plenty more where that came from.

The book opens with an abridged version of an Isaac Watts hymn about the joys of heaven offering one a reason not to fear death. It seems an odd intro, given that the focus in the tale is, to a large degree, about the impact of death on those left behind (no, not in the Tim LeHaye way) with no assurance of a heavenly reward waiting. Perhaps it was intended ironically. In any case, the hymn is beautifully set to music by Red Mountain Music here.

From mentalfloss.com – The Historical Horror of Childbirth

The author’s site is now up