Love May Fail by Matthew Quick

Matthew Quick deals in damage control, from the very nervous Pat Peoples in Silver Linings Playbook to the probably autistic Bartholomew Neil in The Good Luck of Right Now, to a crate of bruised produce in his latest novel, Love May Fail. Portia Kane made a bad choice when she was younger, going for what glittered instead of substance, in her case her writerly yearnings. After confronting her cheating pornographer hubby, Ken (not a doll) in flagrante with another chicklet half her age, Portia manages not to fire her Colt 45, but, instead, heads back home, leaving her terminally damaged marriage in Florida. This being a Matthew Quick novel, home is his usual literary stomping ground, the Philadelphia area, Oaklyn, NJ specifically, which happens to be the town where Quick grew up. Portia moves in with mom who lives with some damage of her own. She is an agoraphobic hoarder with, I am sure, a rainbow of maladies identifiable in the DSM. Will taking care of mom, who, though her belfry is overstuffed, exudes unconditional love for her daughter, help Portia heal herself and get back on her true path?

About that path. Through a chance encounter with a nun, Portia finds a goal for herself. In high school, she had been one of the fortunates who got what her inspirational English teacher, Mister Vernon, had to offer. He had opened her up to creativity, writing and literature. But after suffering a large personal trauma, Vernon has shut himself away in a remote location. Portia makes it her mission to save Mister Vernon, and return him to his calling.

Quick has had a bit of exposure to people with trouble. In his 2013 interview with GoodReads, we learn that he had spent a year trying to help teenagers diagnosed with autism. He had other MH involvement too:

…I worked in neuro health lockdown unit as well, primarily with people who had suffered traumatic brain injuries. We always noticed when we’d get new staff, we’d watch ‘em the first day, and if they laughed on the first day, not at the people we were working with, but at the absurdity of the situation of our day-to-day. If they laughed in a good friendly way, we knew they’d be back the next day. And a lot of times if they didn’t laugh, a lot of times they wouldn’t come back again. They would just quit, after one day.

He looks a lot at existential issues in Love May Fail. Mister Vernon has a dog named Albert Camus, with whom he discusses the absurdity of life. Crazy things happen. There is an appreciation for the need of humor even, or maybe particularly, in dark times and circumstances. He has also spent some time at the front of a classroom, and this informs the novel as well.

Q populates his tales with appropriately quirky characters. The mom does not, IMHO, get enough screen time, but is interesting, in a coot-ish sort of way. Portia reconnects with an old friend from school, someone with a history of drug use. The friend’s five-year-old does Van Halen tribute performances at a local bar. Portia also encounters a saintly nun, a crusty mother superior, a good man who had always had been smitten with her, and a very irascible and troubled former teacher. Saving Mister Vernon will be a challenge. But with the support Portia builds around her, can she break through and get it done? 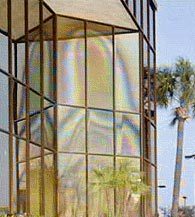 There are events that might be seen as miraculous in Love May Fail. Q refers to a supposed Virgin Mary sighting on the side of an office building in Clearwater. This was a real event, in which people flocked to the place to see and maybe pray to a manifestation of the Virgin. It probably wouldn’t be the strangest thing to have happened in Florida. Maybe she was looking for a condo. Deitific manipulations are applied to make sure that this or that person shows up in a particular place at a certain time. A weepily sad demise recalls the angel Clarence, from It’s a Wonderful Life. And the five-year-old’s stage performance is probably miraculous as well, although in a different way.

The journey of the story is Portia trying to resurrect her old teacher’s career, but also to let herself be born into a better, truer life. I suppose there is a point being made here about divine intervention bringing people together, with the expected nods to personal responsibility and making the most of the opportunities that come ones way, however those link-ups might have been arranged. But, while allowing for the vagaries of free choice, it does seem that there is a pretty powerful director to the events that take place in Love May Fail. Deus ex machina, sans the ex machina piece. Hey, the guy is allowed. It is his story. But it seemed to me that there was too much very specific divine intervention to sustain a willing suspension of disbelief.

Love May Fail is an interesting, engaging story with a typical cast of Q-characters. I performed the mandatory eye-rolls when I felt the divine intervention lines had been crossed, but I still enjoyed the book. Love May Fail is not Quick’s best work, and it is not so engaging as his prior effort, The Good Luck of Right Now, but still, it’s a Matthew Quick novel, so you can expect a positive outlook, likeable characters and a huge, warm heart. You could do worse for a beach outing or a flight. And if you are flying, be sure to pay attention to that nun seated next to you.

You should be warned, however. Do not read this in a public place, unless you are ok with the world seeing you go all wet-face. If you do not blubber on reading a particular scene near the very end of this book, I will officially revoke your Member of the Human Race card. I’m just sayin’.

Film rights have been optioned by Sony

There is a lot of interesting material about Quick in this interview with Dr Jo Anne White . Q talks about coping with depression, working with autistic teens, the importance of laughter, and there is a nice segment in which he talks about teaching. The interview was done around the time his last novel was released, but is still relevant.

Here is the interview Quick did with Goodreads in May, 2013

This vid shows folks gathering at the Virgin Mary appearance in Clearwater, Florida