Kidding Ourselves by Joseph T. Hallinan 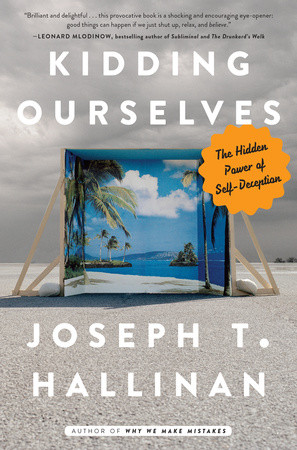 Realism has its limitations

Don’t I know. But after reading Joseph Hallinan’s Kidding Ourselves, you will find a way to get rid of those extra pounds; you will finally step up and demand that raise you have been denied for the last several years; you will ask out that person you have had your eye on for so long; you will give up that nasty habit, you know the one; and you will finally get around to writing that book. All you have to do is want it enough, and think positively. Yeah, right. We have been fed a steady diet of positive thinkology from Norman Vincent Peale to Professor Harold Hill to Tony Robbins, from cultish directions like EST, and from con artists from Ponzi to Madoff.

Barbara Ehrenreich, in Bright-Sided , pulled back the curtain on a lot of the sort of scamming that the think-positive sorts have been inflicting on us all. I share her views on this stuff. Most of the see-no-evil promulgators seek little more than to divert our attention from the real societal causes of many of our maladies, and in doing so pad their own pockets. Most of us, for example, are not struggling financially because we got too little education, the wrong sort of education, are lazy, unfocused, not good enough, not beautiful or strong enough, or are bad people who deserve what happens to us. It is because the rich SOBs who run the world decided to steal more than they already had, and have the power to make government hold us down while they go through our pockets, and then demand that we thank them for the privilege.

Blaming the victim is a national, no, a global past-time, and urging people to believe that the fault is in them and that if they just had a better attitude they would succeed, is the sort of tangy Kool Aid that people like Jim Jones have been peddling for a long time.

This is all to say that I approached the book with a full magazine of attitude and an itchy finger. So, is this guy another in a long line of con artists trying to blame the victim? Turns out, not so much. At ease, soldier.

The author – from Wikimedia

Joseph T. Hallinan is a Pulitzer Prize winning journalist, who reported for the Wall Street Journal, has written on the prison system, and wrote a 2009 popular psychology look at some of our many imperfections as human beings, the how and why we are the way we are, Why We Make Mistakes. Hallinan’s latest, Kidding Ourselves, a relatively short book (210 pps in my proof), looks at a narrow range of human behavior, although it does manage to cover a fairly wide swath of human (and sometimes non-human) experience. He is not so much promoting the notion of looking on the sunny side of life as taking a pop-psych microscope to the behavior itself. He breaks down the many ways in which homo sap practices self-delusion, and it is not exactly all positive.

Health-wise, he offers evidence that one’s attitude definitely matters. Expecting a positive outcome has measurable palliative results, independent of the pharmacological benefit of drugs or procedures applied to a medical problem. The obverse is true as well, expecting the worst can often bring it about. One really can die from, say, hypochondria, or a broken heart. Depression does cause physical harm to those who experience it.

Hallinan looks into the relationship between our perceptions and reality. You know that right-wing uncle who insists that Obama was born in Kenya and is a Muslim? You showed him all the evidence, right? And the result? He absolutely refused to accept the facts, clinging instead to his attitudes. I’d want to smack him too. Hallinan looks into this and offers an explanation for this seemingly inexplicable dedication to ignorance.

The book is about how we need to feel some control in our lives, almost more than anything else, whether it is that the cross-walk sign might flash “Walk” sooner in response to our pressing a button, whether it is that we can, through wise investing, control our financial future, or whether we believe that by repeating some ritual behavior we might therefore succeed in some endeavor. And we kid ourselves in order to be able to feel that there is something, anything, that is under our control. Otherwise we feel completely hopeless and the implications of that are not good. One result of this is that the confidence we gain from our beliefs, regardless of their basis in reality, can sometimes make the difference between success and failure, improvement or relapse, life or death.

This is, as noted, a short book, so one does not expect a deep, heavily detailed scientific treatise. It is pop-psychology, written by a journalist, not a scientist, meant for readers like you and me. That said, my antennae started to vibrate a time or three when I felt that the analysis was particularly, and problematically blindered. For example, Hallinan cites surveys of public attitudes regarding taxation that shows a persistent degree of dissatisfaction despite changes in rates over time. Problem is that the rate change under study is the top marginal tax rate, the rate paid by the highest wage-earners. Most people are not affected by this, so why would their attitude change at all? And given that taxes on working and middle class wage-earners had not dropped, and may even have gone up over the time span covered in the study, it is no surprise that general attitudes toward taxation would have seen little change. Another section looks at the persistence of false beliefs, as if they exist in a vacuum.

How could so many people persistently believe something unsupported by facts?
“I don’t have an explanation for that,” said pollster Jim Williams. “All I can say is that we have looked at that in other places in the past and it’s never gone away.”

Fuh real? How dim are you guys? Have you never heard of the 24/7 Lie Network at Fox, the masses of newspapers owned by Rupert Murdoch or Clear Channel broadcasting, right-wing radio, and the gazillions of know-nothing web-sites that sprout like algal blooms in the path of agricultural runoff? Sure, people will cling to nonsense in the absence of such assistance, but when it is blasted into your brain constantly, it will have an impact. So yeah, it does seem sometimes that the author has been a bit blind to some obvious real-world factors, which is ironic, as he points out the bias inherent in some well-known scientists here as well.

But he does offer quite a few examples of real scientific studies that indicate that sometimes mind-over-matter really….um…matters. Not, of course, in other-worldly sorts of manifestations, like making that missing limb grow back, or altering the immediate balance in your bank account. But to the extent that confidence comes into play, and it does come into play quite a bit, it might not hurt to accentuate the positive, Whistle a Happy Tune , hum a little Zip-a-Dee-Doo-Dah or channel a small, very, very small dose of Stuart Smalley. You may be a loser, a 97 pound weakling, too fat, too skinny, too old, too young, too tall, too short, but the extra boost that confidence, fueled by religion, superstition, and downright nonsense injects really can make a difference in many of life’s outcomes.

He makes a case that self-delusion, as a defense against hopelessness, is a crucial element in what it means to be human, and that it has provided actual evolutionary advantages. It may be that to err is human, but it would appear equally human to convince ourselves that we were right all along. Hallinan maintains that self-delusion not only exists across all human cultures but is present in animal psychology as well. Rats kid themselves too.

There will always be a danger that the limited range covered in this book will be taken by the con artists of the world as being more than it is and be presented as an “I told you so.” It isn’t. It is specific, illuminating and fascinating. I kid you not.

This book was received via GR’s First Reads program – Thanks, guys

I did not find a web-site for the author unadorned, but here is one for his earlier book, Why We Make Mistakes.

Here is a wiki on a 1986 essay by philosopher Henry G. Frankfurt that seems germane, On Bullshit

And a few more musical links that fit right in, from Stevie Wonder, George Michael , and The Monkees. So many more could work here.

In Salon, an excerpt from an interesting book by Oliver Burkeman, Positive Thinking is for Suckers

Filed under Non-fiction, Psychology and the Brain, Reviews