The Wilderness of Ruin: A Tale of Madness, Fire, and the Hunt for America’s Youngest Serial Killer by Roseanne Montillo

He pointed out that “a strong lack of conscience” is one of the hallmarks for these individuals. “Their game is self-gratification at the other person’s experience,” Hare said. “Psychopathic killers, however, are not mad, according to accepted legal and psychiatric standards. The acts result not from a deranged mind but from a cold, calculating rationality combined with a chilly inability to treat others as thinking, feeling humans.” – the author quoting Robert Hare, author of a book on Psychopathy

Call me Will. Some years ago, a lot, don’t ask, I thought I would see a bit of that northern rival city. It was wintry, snow on the ground. Accommodations were meager. No, I was not there alone, and the journey was not without portents. But I was spared a room-mate of the cannibalistic inclination. I still feel the pull, on occasions. Maybe stop by to see relics of Revolution, fields of dreams crushed and fulfilled, walk spaces where giants once strode. So I was drawn to Roseanne Montillo’s latest. In her previous book, The Lady and Her Monsters, she followed the trail of creation blazed by Mary Shelley as she put together her masterpiece, Frankenstein. In The Wilderness of Ruin, Montillo is back looking at monsters and creators. This time the two are not so closely linked. The monster is this tale is all too real, the youngest serial killer in US history. The artist in this volume is Herman Melville (and, of course, his monster as well, but the killer is the primary monster here) . Montillo treats us to a look at his life, or at least parts of it, and offers some details on the elements that went into the construction of his masterpiece, Moby Dick. A consideration of madness, in his work and in his life, and public discourse on the subject of madness links the two. A third character here is Boston of the late 19th century, as Montillo offers us a look at the place, most particularly in the 1870s. I am sure there are parts of the city remaining, in the Fenway-Kenmore neighborhood, for one, where a form of madness is regularly experienced.

Before the infamous serial killers whose names we know too well, before BTK and Dahmer, before Bundy and Gacy, long before the Boston Strangler, Bean Town was afflicted by a particularly bloody small-fry with particularly large problems. Jesse Pomeroy was a sociopathic little beast who, as a pre-teen, preyed on small children, kidnapping, assaulting and cutting them. He was even known to have taken a bite. As a teen, after a spell in juvie, he graduated to murder. The book calls him America’s youngest serial killer. A drunken, abusive lout of a father played a part, but was Jesse born a monster or was he made? Of course, he would probably not fit as an actual serial killer, as currently defined, but he was definitely a multiple murderer, generated considerable terror in the area, and was certainly sociopathic.

Montillo offers us a look at the mean streets of Boston in the 1870s. Her descriptions are filled with illuminating, and sometimes wonderful details. It was a very Dickensian scene with poverty widespread and in full view. Child labor was usual, housing was cramped and susceptible to conflagration. Class lines were sometimes demarcated quite clearly. Montillo tells of one in particular, Mount Vernon Street, that marked where well-to-do South Slope ended and working class North Slope began. It was also known as Mount Whoredom Street for its concentration of bordellos. My favorite period detail concerns a World Peace Jubilee that took place in 1872, following the end of the Franco-Prussian war. (The mayor was trying to spruce up the city’s image.) Johann Strauss played Blue Danube, and one hundred fifty firemen took the stage of the newly constructed Coliseum to perform a piece of music by pounding on 150 anvils, which probably makes Boston the birthplace of heavy metal (sorry). The Coliseum in the World Peace Jubilee

Montillo also tells of the sort of political shortsightedness which has plagued governments everywhere. The Fire Chief had taken note of the unpleasantness endured by Chicago in 1871 and urged the city government to do some infrastructure investment to prevent a similar outcome. Think the city did it? Of course, after the conflagration, the media, indulging in their usual investigative acuity, somehow focused blame on the one guy who was trying to prevent catastrophe. Same ole media.

Baked Beantown – from Library of Congress

Melville had to endure some troubles of his own. We in the 21st century may regard Moby Dick as one of the masterpieces of American literature, but it sold like three-day old fish. Melville earned less than $600 for his effort, which labors took a considerable toll on his health and maybe on his sanity. Imagine you are Herman Melville and are working on your Opus Magnus, in a place (Arrowhead, in Pittsfield, MA) that is heavy with family, visitors, screaming children, constant distraction, and your family is trying to get you to stop writing, because, of course, it is the writing that is making you nuts. It is amazing to me that Melville did not take a page from Pomeroy’s book and reduce his distractions a notch. It will come as no surprise that he was quite interested in the notion of madness. It was a widely discussed issue of the day. There was direct applicability of the madness discussion to matters like sentencing. If a prisoner is considered insane, would it be ok to execute him? Montillo goes into some of the thought at the time and the thinkers making their cases. Melville’s interest in madness was certainly manifest in his book. Ahab has…issues.

Another treat in the book is some more back story on where and how Melville got some of his material. I had thought it was the tale of the Essex that had been the sole white whale inspiration. Turns out there was an earlier one. Just when you thought it was safe to go back in the whaler…. I am not aware of the name of the aged whale that took out the Essex, but the earlier one was named Mocha Dick, Mocha for the island near where it was sighted, and Dick as a generic appellation, like the Joe part of GI Joe. It does, however, sound like an unspeakable beverage not on sale at Starbuck’s, so far as I am aware. 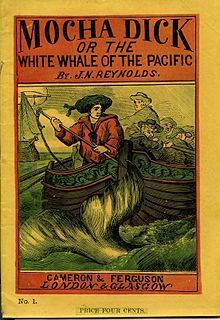 Cover of J. N. Reynolds story Mocha Dick or the White Whale of the Pacific

Due to the joining together of a city and a multiple murderer, The Wilderness of Ruin does bear a base similarity to Erik Larson’s outstanding book, The Devil in the White City. Both tell of an awful killer, and depict a major American city at a time of great change. However Wilderness… does not deliver quite the punch of the earlier book.

First, the link between the killer and Melville lies not in their having anything to do with each other. It is in the fact that madness is associated with both of them. And that is a fairly thin tether with which to connect the two. There are added links having to do with perception of relative skull size and skin color, but I thought those were a stretch. Given how magnificently Montillo had delved into the underpinnings of Mary Shelley’s great work, I believe she would have been well served to have offered up another on Melville. It is possible, of course, that she did not have enough new material with which to populate an entire volume. And there is no shortage of material on Melville out there already. (a Google search of “Melville biography” yielded 9,460 results) Of course, I expect the same might have been said for Mary Shelley. Don’t know, but the linkage felt forced.

Second, there is not really much of a hunt for Pomeroy. He spends most of his time in the book well contained behind bars, attempting to escape his come-uppance legally, and with digging tools, unlike the devil in Chicago, who remained at his dark task for most of that tale.

Third, the title may suggest something to the author, (terminology used to describe the aftermath of the Chicago fire, perhaps) I did not really get a clear image of the stories being told from the title. I suppose Pomeroy creates his fair share of ruin, and Melville endures far too much, and, of course, the city goes all to blazes, but the title just felt off to me.

However, there is still plenty to like in The Wilderness…. That one can come away from this book with a Zapruder-like mantra, “There was a second white whale,“ is almost worth the price of admission on its own. For those who have not already availed of material on Herman, there is enough here to whet one’s appetite, without going overboard. Some of the details of 19th century Boston (Yes, the parts may not have been legally part of the Boston of the era, but they are part of it today) are fascinating. There is a nugget on the origin of a famous Poe story, from when he was stationed in Boston. The discussion on madness is certainly worth listening in on. As is an exchange of ideas about the benefits of solitary confinement. Finally, there is cross-centuries relevance to how government and media function. It will certainly come as no surprise to anyone living in 21st century America that lily-livered politicians would rather take a chance on their districts burning to the ground sooner than spend public money to protect them. And were you aware that Boston had suffered a catastrophic conflagration only a year after Chicago? (excluding you folks from the Boston area. You know about this, right?) And it will come as no surprise to anyone with a radio, television or computer that substantial portions of the media are dedicated to dimming the light by increasing the temperature. The book may not be equal to the sum of the parts, the linkages are a bit frayed, the hunt for and serial designation of the killer may have been exaggerated, but the parts are still pretty interesting. It is always a good thing to visit Boston.

Moby Dick for free on Gutenberg

Here is a wiki on Mocha Dick , and here the text of the Knickerbocker article in which that tale is told.

A wiki piece on the World Peace Jubilee