Heraclix and Pomp by Forrest Aguirre 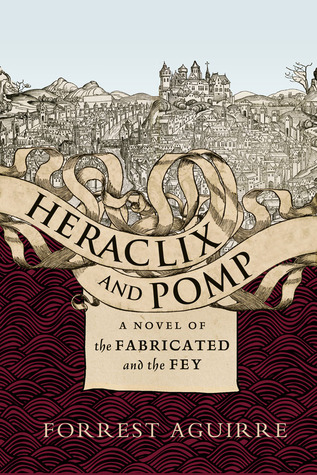 …what were the origins of the many pieces of Heraclix? He was like a puzzle to himself, an unknown being or beings, self-aware, yet unaware of the individuals from whom he had been constructed.

Where do we come from? Of what are we made? Who are we? How did we get to be who we are? Can we change? In the case of Heraclix, of the title, all the above apply. H is a big guy. Think Shrek with a bit less green. Usually the golem is a clay creature, but H is more of a group effort, being comprised of parts, a Frankenstein monster with better (than the film) motor skills, and a makeover. Heraclix is riven, as so many of us are, with a complicated nature. His is more physical in it’s manifestation, though. With one arm in particular eager for action, he reminded me a bit of Doctor Strangelove . In a nifty opening, he breaks out of a womb-like vat of liquid (not the last birth event in the book), and does what any newborn might do. He reads everything he can get his paws on. Doesn’t know where the ability came from, but really, really wants to get a handle on his world, and comes across Daddy his maker’s porn private, and very disturbing, notes.

Mattatheus Mowler is not your garden variety sorcerer. Sure he’s a few hundred years old, and is educated enough to animate dead parts, among other nifty tricks, but the boy has some serious ambition, not to mention an issue with aging, and is not to be messed with. That brimstone aroma that may be wrinkling your nose emanates the Faustian bargain he has made. He has a client list that would be the envy of any K Street operative. Of course, evil, connected genius or not, he is still human, more or less, and makes mistakes enough to allow for an actual contest. Not exactly your ideal re-animator, (or would that be assembler?) as daddy dearest rains blows and other abuse down on Heraclix’s large frame with abandon. But one day MM brings a sweet young thing to the lab, in a jar.

Pomp is a pixie with moxie. She encourages H to stand up for himself, and overcome the self-loathing that accompanies his beatings. Mowler has dark plans for her of the sacrificial sort, but the plan flies to pieces, the premises succumbs to fire (always a risk when dealing with hellspawn), and a dynamic dimorphic duo is made.

The author – please note the shooter on his sleeve

The motive force here is Heraclix trying to find out who he actually is. With information gleaned from Mowler’s premises, he and Pomp set off on a classic journey of self-discovery. They cover a fair piece of European landscape, beginning in Vienna, with stops in Prague, Istanbul, Budapest, and sundry locales in between. Along the way they pick up pieces of the puzzle, as in a video game, that lead them from place to place. The information is sometimes in the form of clues, in Mowler’s papers, say, or in writing along the side of a coin. More often it is in the form of stories told by Gypsies, Cossacks, wizards, an old man in an obscure town, sundry characters they encounter in their quest. As the pair travel, together and separately, they gain points knowledge.

Heraclix comes across as a likeable hulk. He has a pure heart (whomever it might once have belonged to) and is an honest seeker after truth. In trying to discover his true identity he learns a thing or two

…there was something in the quality of sorrow suffered at the hands of another that was different than the sorrow that one brought on others, whether through one’s own stupidity and neglect or by intentional acts of hatred. The latter carried the sharpest stings of guilt, regret, self-berating…

Pomp, while a very valuable partner, is not so much seeking truth herself as she is eager to help Heraclix. Hey, the big lug saved her, so she owes him. But she finds that she, as well, is challenged to consider her view of herself and the world.

Her life isn’t now about playing pranks all day every day. It isn’t about not caring. All this playing pranks and not caring isn’t fun any more. If she goes on like this, her life stays immortally, eternally…boring. Death is sad, but death makes life more worth living.

In addition to H&P there is a parallel story involving Holy Roman Empire royalty, a young lass, and a fair bit of intrigue.

There are some images and themes that run throughout. Birth is addressed multiple times, in both a biological and baptismal way. Heraclix is very clearly being born by breaking out of a watery enclosure in an early scene. There is what might be seen as a baptism by fire, and later in the book, he has what seems another aqueous bursting through or two. History figures large here. Pomp, when we meet her, has no notion of it, not understanding the concept of memory. Heraclix cannot remember anything and wants to find out who he is. The tale is told in a historical context, offering a look at the feel, if not much of the detail, of tension between the Holy Roman Empire and its foreign enemies. Eternal life is addressed in the wizard’s desire for it and in how Pomp, who has it, copes with and gives a lot of thought to the implications of life without end. Changing one’s life is also addressed on multiple fronts. A killer becomes a healer. Pomp is faced with potentially changing her orientation as well, getting to see in person the questionable wages of all-fun-all –the-time.

I am sure there are many references to folk tales I missed in here, but a visit to hell itself surely must conjure Dante. So be on the lookout for references to The Inferno. And heading to the basement certainly seems in synch with a Campbellian structure.

One of the things that most impressed me was the diversity and creativity of Aguirre’s imagination. Heraclix alone is a marvelous concoction, but there are many more. Phantoms haunting the one who killed them, demonflies from Hell, a Godzilla-like Beelzebub, some carnivorous clover, fairies up to no good, a demonized crow, some magic mirrors, a telescope for seeing magic. The list is considerable and the creations quite fun. While some echo familiar elements of fantasy fiction, there is an added layer of the new that gives it all some real sparkle.

Gripes were few. There are a fair number of characters, and it can be a bit tough at times keeping them straight. The ARC I read did not have a list of characters in it. I do not know if the final version might. I find it useful to make my own list as I read to help keep everyone straight. Also there was one escape I had a problem with. H manages to escape from hell, but it is not entirely clear to me how he got from underground to above..

Aguirre has established himself as a top-drawer, award-winning editor of speculative fiction, and a seasoned writer of sci-fi as well. Heraclix and Pomp demonstrates that he is also a confident, creative and imaginative novelist. The journey on which Heraclix and Pomp set out is a consistently interesting and engaging one, offering not only a look at a fantastical world, but adult consideration of eternal, real-world, existential issues. I am sure they would love for you to tag along.

Heraclix and Pomp was sent along by the author, a GR friend, in return for a fair review

Aguirre’s blogspot page, Forrest for the Trees, includes a 24:47 sample of the audio book. Some items in the archives are worth a look, including a three-part sneak peek at the second adventure of H&P, and a piece on his writing process (no necromancy involved).

An interesting interview with Forrest on Shelf Inflicted, in which, among other things, he talks about how H&P came to be.