All Involved by Ryan Gattis …this whole entire scene says the same to me as it says to every other knucklehead who ever thought bad thoughts across this whole city: now’s your fucking day, homie. Felicdades, you won the lottery! Go out there and get wild, it says. Come and take what you can, it says. If you’re bad enough, if you’re strong enough, come out and take it. Devil’s night in broad daylight, I call it.

At 3:15pm on April 29, 1992, a Simi Valley jury found the police officers who had beaten the crap out of Rodney King, on what was certainly one of the first viral videos, not guilty. At 6:45pm, as news of the verdict spread, Los Angeles exploded with rage. For most of the next week large swaths of the city burned, almost four thousand buildings, with property damage in excess of a billion dollars. Stores were looted. Dozens died, and when the LA Police Department was unable to stem the violence, the National Guard was called in. In many cases police and security personnel stood around as stores were torched and/or looted, a close-to-home reminder of what US troops in Baghdad had done in 1991 when the locals were making off with sundry public property and untold national treasures. Rioting is messy. Stuff happens. The prolonged unrest, called an uprising by some, was a reaction not only to the jury’s decision, but, for many, to a lifetime of duress.

Ryan Gattis, who, among other things, is part of a street art project in LA, got considerable insight into what had gone on in 1992 from other members of that group, folks who had been present for the experience. The result is a stunning piece of work, as Guernica was for the Spanish Civil War, so All Involved is for the LA Uprising, a complex, horrifying, moving portrait of a city at war with itself.

The book is divided into six parts, one for each day of the riot. Each part is sub-divided into two or three chapters, one for each the 17 characters whose tales are told. The primary character in each chapter is presented in first person, and Gattis does an excellent job of preserving their individuality.

Ernesto Vera, a food worker with a sophisticated palate, aspires to opening his own restaurant. Straight arrow. Keeps his nose clean. Is kind to the less fortunate. A good, no, a very good guy. That does not matter to some. What matters is that he is brother to Ray, aka Lil Mosco, who is very much not a very good guy. Ray managed to shoot a woman while trying to kill someone else. Since Ray cannot be found, since direct revenge cannot be taken by the woman’s family, Ernie will have to do. From this spark the fire grows.

Ernie lived with his sixteen-year-old sister, Lupe, and Big Fe, the leader of a local gang. Big Fe is the general, the warlord, and justice for killing Ernie will be meted out. We see each of the players as they wend their way through this six-day-long drama. A bit player here is featured there. The parts connect. We get to see events from several angles. It is like looking at a holographic image. As you change perspective the image shifts. We are shown individual motivations. This event takes place because of a prior event, but the new event results in subsequent ripples. And on it goes. 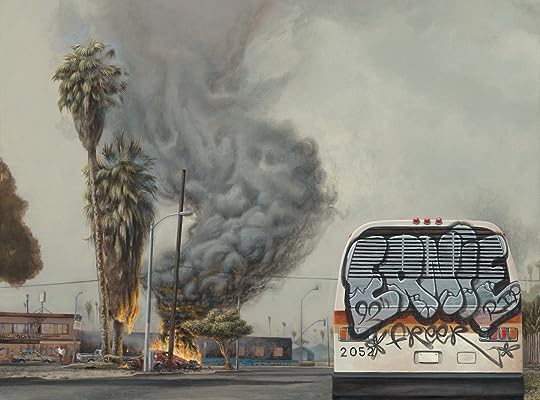 The primary media focus for the events concerned black rage at injustice. But the Latino population in 1992 was almost as large as the black population. Gattis focuses primarily on the former community here, in the Los Angeles County city of Lynwood. Add to the problems blacks have with the police the potential for many Hispanics who are in the country illegally to be deported. In The Divide Matt Taibbi offered a pretty detailed look at how the unequal treatment dealt out by the criminal justice system has created a large segment of America that has a lot more in common with the West Bank than it does with Beverly Hills. It is not surprising, that a prolonged violent reaction might take place in response to a dramatic legal slap in the face. But the conflagration of violence offered cover to many with other motivations.

They think it’s sad, some kind of thoughtless, primal rage thing. It’s not. It’s mostly planned and it’s one of three things—grudge, mayhem, or insurance…It’s grudge if one guy doesn’t like the other guy for whatever reason, so he takes advantage of the chaos to do something about it, so even the race stuff, like what the blacks are doing to the Koreans, goes here. It’s mayhem if you’re deliberately setting it for the heck of it, or if you’re trying to cover a crime, or using it as a distraction to draw emergency assistance elsewhere so you can commit a crime somewhere else, which the gangs definitely do…. The last and likeliest, it’s insurance of you’ve got a business in a run-down part of the city and it’s not making as much money as you want but you do have fire insurance and you’ve been paying hefty premiums on that policy for damn near too long and then one day the racist cops get acquitted and all of a sudden up pops the opportunity to torch your own premises and get away with it—all you have to do is blame gangs or looters, so why not?

Wars are fought in the smoke-filled nights, personal, gang-related, mindless-rage-based. Ordnance fills the air like Beirut during the Lebanese civil war, L.A as Walpurgisnacht, with witches and demons of all sorts throwing flames, dousing with accelerant, and casting dark spells. A place where it is not uncommon for firefighters to find bullets on their rigs, where a police escort is needed to keep them from being shot while putting out fires. There are scenes that are reminiscent of Mad Max, as those driving fire-trucks know better than to stop when someone walks into their lane. Any rig that does will come under immediate assault. One attack on firefighters is resonant with the real world attack on Reginald Denny. You are there.

So how, in all the mayhem, in all the violence, in all the death and destruction can we find some humanity? Gattis may have created a dark portrait of a time and place, but his people are much more than kindling. He takes time with each of his many characters to build, to show where they came from, how they got to where they are, to understand their motivations, their dreams. It is true that for some, all they want is to become even more dangerous than they already are. But there is profound humanity on display as well. A tagger is shown as an artist, a nurse dreams of love, a gang member with CSI skills wonders what else there might be for him in the world. Other gang members connect with old cinema, surprising music, one with his cat, Teeny. There are plenty of pure black hats to go around, but Gattis mixes large dollops of color as well. There are people you can feel for here, and not just the studly Dudley Do-right fireman, or the compassionate nurse. Not all the burned can be healed. Some, as awful as they seem, shouldn’t be. Others might be true citizens if given a chance. 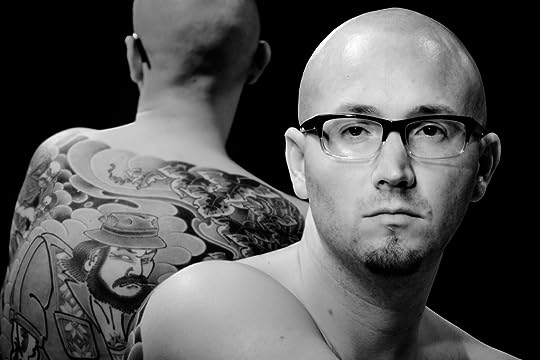 Ryan Gattis – from his site

Gattis drops in relevant information through various means. Intel on the number of guns in L.A. is truly alarming, or should be. Information on the number of gang members versus the number of police is frightening. Gangs do not come into existence in a vacuum. Where safety is assured, and enforced, where the population feels protected, attended to, respected, gangs cannot flourish. It is when there is inadequate protection that people turn to other forms of self-preservation. The growth of gangs in Los Angeles and other cities is a testament to the failure of law enforcement to do what is needed, and reflects also the failure of political leaders to provide the resources public safety departments need to do their jobs, the failure of leaders to nurture a vision of the future with educational and career opportunities of the legal sort.

There’s a helicopter overhead—looks like Channel 7—shining a light down on us like we’re at the bottom of a deep, dark hole. The people who live around here, they know what that actually feels like. They know how ugly life can get. Everybody else, the people sitting at home, watching this unfold on television, they have no idea. Those are the people shocked by the riots. They can’t comprehend them because they don’t understand the other side. They don’t understand what happens to people with no money who live in a neighborhood where crime is actually a viable career path when there are no other opportunities, and I’m not excusing it or condoning it or saying it can’t be avoided, but I’m saying that’s how it is.

Ryan Gattis has written a masterpiece. A soldier-by soldier, bullet-by-bullet, Molotov-by-Molotov look at a recurring tragedy in American history. You will smell the smoke, feel the heat and get an urge to bolt the doors and slip into some Kevlar. All Involved is one of the hottest books of the year. It is not to be missed.

There is a bounty of musical links on the author’s site, but you will need to be signed in to spotify to listen. Here are a couple from that list available on youtube:
Ride of the Valkyries
Star Wars – Burning homestead on Tattooine

You can see 1:23 of the 12 minute Rodney King tape on George Holliday’s (the guy who shot it) site

The NY Times review by Michiko Kakutani is worth a look