Tag Archives: Everything She Forgot

Everything She Forgot by Lisa Ballantyne

Margaret Holloway is 35, a deputy head teacher at a nearby academy, a wife, a mother, and a mentor to a young student who is struggling to pull himself up from his family’s low beginnings. She has a full life but her memory has a large gap. She can’t seem to remember much from the age of 7 and earlier. That begins to change after she is in a major highway pileup, and is pulled from her about-to-go-boom wreck by a mysterious scarred man. There is something about him that is disturbing. The lost time begins seeping back into her consciousness, sparking her to begin opening doors to her long hidden past.

Big George McLaughlin is a gentle giant of a man with the misfortune of having been born to a physically brutal and criminally inclined Glaswegian family, with little tolerance for his more tender inclinations. When teenage George gets the girl he loves pregnant, he wants to do the right thing. Her parents would rather not have her form an alliance with such an infamous family. George gets to hold his new baby for only a moment, before the mother and child move to the farthest reaches of the country. But it is long enough for him to fall in love with their wee lassie, too.

Kathleen Henderson is desperate. Her daughter has been abducted by some strange man, and the police seem to be making no progress in finding her. She is terrified that her daughter has run afoul of a serial child killer at large in Scotland.

Angus Campbell is a journalist with a heart several sizes too small, an inflated sense of his merits, an extreme and hypocritical attachment to what he sees as moral rectitude, and a streak of cruelty that he applies liberally to his wife and daughter. Through dogged research he believes he knows what has become of the missing girl and goes about trying to locate her, convinced that this heroic undertaking will gain him the national notice he merits. For a person of diminutive stature, he somehow manages to look down his nose at practically everyone.

The story moves back and forth between today, 2013, in which Margaret and 1985, when George took Molly, the latter being when most of the action takes place, 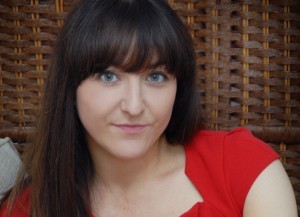 Lisa Ballantyne – from her site

Lisa Ballantyne has a penchant for focusing on the difficulties children experience in families. This was central to her wonderful first novel, The Guilty One, an Edgar Award nominee, which paralleled the lives of a possibly sociopathic young boy accused of murder with his attorney, a man whose childhood had been extremely challenging. Family ties come in for a close look in Everything She Forgot as well. Of course you might want to look away, as some of these families are the kind where the best thing you could do, were you a member, would be to flee, as early and as far as possible. George’s father was a sadistic brute. Angus treats his wife and daughter with none of the tenderness he reserves for his favorite cow. But the ties that bind are still there. And even though George has not seen his daughter since she was piping hot, he feels an undeniable connection. So when chance presents him with an opportunity, he grabs it, follows his heart to the highlands and goes a-questing. Maybe this time, his lost love will agree to marry him. Maybe this time he can be a proper father to his daughter.

Things do not go as planned and George winds up abducting his child and becoming the object of a nation-wide manhunt. If you get the impression there is a strong journey of self-discovery motif here it bears knowing that the title of the UK release of this book was Redemption Road. The journey itself goes, literally, from one end of the UK to the other, from John o’Groats at the northeasternmost point of the Scottish mainland to Land’s End at the southwestern tip of Cornwall, a distance of well over eight hundred miles, allowing the travelers time to get to know one other. (No, George doesn’t walk)

Can George slay his familial dragons? Can he ever be a father to his lost child? Is it even possible that his daughter will acknowledge, let alone accept him? Will the police catch him? Will Angus? Will Molly be returned to her mother?

There are some elements in Everything She Forgot that you may or may not want to remember. First is the degree of Margaret’s amnesia. It seemed to me to extend well beyond the psychologically damaging event that generated her particular manifestation of PTSD. Second, there is an adult character who is unable to read or write. Not some feral person raised by a colony of Orkney voles, but someone who abandoned school as a teen. I suppose it is possible for someone to attend classes into adolescence and still find the funny curved markings on paper indecipherable, but it struck me as a bit of a stretch. While on their journey of mutual discovery George and Molly find shelter when an ex-girlfriend of George’s just happens be ok with him crashing at her flat while she is out of town. But then there are many who cling to a belief in a local lake loch beastie of note, so who am I to gainsay a bit of credulity-stretching? Finally, there are two events in the book that involve harm to animals by the beastly. They are appropriate in their illustration of the characters’ character. But be forewarned, in case this sort of thing is a deal-breaker for you.

There are larger themes permeating the novel. Is DNA destiny? Where does nature leave off and nurture take over? The core of this tale, though, is George and Molly’s coming and growing together. George is an engaging sort, with a heart far bigger than his circumstances would have predicted. You will want him to come to a good end, somehow. Molly is a spunky kid and you won’t want anything bad to happen to her. Her biological father may come from a household of career criminals, but she can feel that there is good in him, that he truly cares for her. Lisa Ballantyne’s sophomore effort offers a journey worth taking. Once you meet and spend some road time with George and Molly you won’t forget them.