The Sleepwalker’s Guide to Dancing by Mira Jacob

We arrive in this world connected, to people, to places, to cultures. Just because we move on with our lives, emotionally, intellectually, or geographically, this does not mean that our connections are all left behind.

In Mira Jacob’s debut novel, The Sleepwalker’s Guide to Dancing, her characters all struggle with connections, to each other, to their past, to their culture, and ultimately to themselves. For some that struggle includes a connection to reality. The story looks at three places, India, Albuquerque and Seattle, and three times, the late 70s, early 80s and 1998.

When we meet the Eapen family, in 1979, they are visiting the place and family they had left, in Salem, India. Thomas Eapen, a surgeon, had sought a better life for his wife and children in America. Home still has power, though, and his mother, also a physician, tries her best to persuade her son to remain. We meet the family members who had remained, and see some of the strains that might lead one to seek a life elsewhere. The motherland still has a hold, though, and Thomas’s wife Kamala, would like nothing more than to remain.

Amina Eapen is a photographer, working in Seattle in 1998. She had been a successful photojournalist, but has stepped back from that for reasons I will not go into here, and is now shooting events. Amina has a gift for capturing telling moments and is our camera into the history and struggles of the Eapen family. Dr. Thomas Eapen is seriously ill, seeing things that are not there, talking to people who are long dead. It has affected his work. When his wife calls Amina, she returns home to Albuquerque. Eapen’s illness is the maguffin for examining the experience of the Eapen family.

In addition to the strain of emigrating from India and constructing a new life on the other side of the world, the Eapens suffered a huge loss. We learn early on that Amina’s brother, Akhil, died young. The story goes to the early 1980s, where we see Amina and her brother in school, beginning to have relationships, struggling to grow up. Akhil shows some odd behavior, sleeping for vast stretches, falling asleep in inappropriate situations, believing that something glorious is in store for him if only he can complete a particular task. It is not entirely clear whether this is eccentricity or a condition, and neurosurgeon Thomas dismisses it.

So, there is a bit of mystery here. What happened to Akhil? What is going on with Thomas? It also takes some time to learn why it was that Amina stepped away from photojournalism. It is in peeling back the layers of those stories that we learn about the characters. There is a bit of romance as well, but, thankfully, it does not at all take away from the story.

While this is not a laugh-out-loud sort of read, there are plenty of light, even delightful moments that will make you smile. Of course, there are very sad ones as well 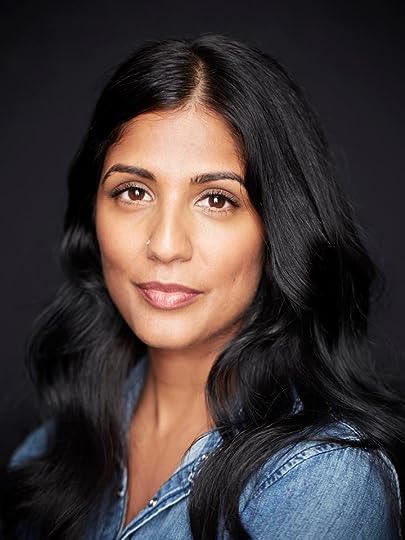 The author – from her web site

Much is made of attachment to place. When Thomas cedes his ownership rights to a family property in India there is a direct connection to be made to a story to which Amina is connected, of Native Americans in the northwest ceding land to the extant society in return for the hope that a large amount of cash can improve their lives. There are also smaller scale elements relating to territory.

To live in the Eapen’s house was to acknowledge the sharpness of invisible borders, the separations that had divided it like two countries since 1983. It had been years since Amina had seen her mother wade into the yellow light of her father’s porch, and as far as she knew, Thomas had never once crossed the gate into Kamala’s garden.

One of the connections made is in the similarities between the old world and the new, between generations. Just as Thomas’s mother schemes to try to keep him in India, Amina’s mother schemes to try to keep her in New Mexico. Just as Thomas’s brother spoke to people who were not there in India, Thomas holds his own conversations with the dead in America. Both Thomas and Akhil balk at the limitations inherent in their conditions. Food is used as a way for old and new to connect

Cooking was a talent of her mother’s that Amina often thought of as evolutionary, a way for Kamala to survive herself with friendships intact. Like plumage that expanded to rainbow an otherwise unremarkable bird. Kamala’s ability to transform raw ingredients into sumptuous meals brought her the kind of love her personality on its own might have repelled.

Bonds are made through feeding as a way of loving.

Another element is secrecy. Amina maintains a private cache of her special photographs, non-commercial ones that epitomize her skill at catching important moments. Thomas keeps his medical situation secret, and a few other things besides. And that ties in to feeling like an outsider, whether one is a native in a land now dominated by European invaders, or a new arrival in America, whether one is a black sheep in a family or an ostracized teen at school.

Amina has a wonderful relationship with her cousin, the wonderfully named Dimple, and there is a supportive, non-parental adult, the cool aunt, Sanji, who is able to bridge the gap between the young and the not so young, offering understanding and support, along with adult wisdom.

As for the sleepwalking element, there is a character who literally sleepwalks, and his connection to dancing is revealed at the end. Thomas’s visions might be seen as a form of sleepwalking. Akhil has big issues with sleep, but sleepwalking is not among them. And there are other characters who see things that are not there, which may be a form of sleepwalking. There is a mention in the book of a sleepwalker’s disregard for her surroundings. It is unclear if the author is suggesting that we are all sleepwalkers in a way, or that we should pay more attention to our effects on the world, or should attend to our visions. Did not get it. Doesn’t matter though. There is plenty to go with here, even if one is not able to cross every thematic t or dot every metaphorical i.

Gripes? I would have liked to have seen more, well anything actually, on the Eapen family’s experience when they had first moved to the USA. We only get to see them once they are already settled.

Amina is engaging, definitely worth caring about. Family is family is family, whether the family in question is from India or Indiana, and you are sure to recognize some folks in Amina’s clan who remind you of members of yours. The story is interesting. One gets a strong sense of the warmth and humor as well as the struggles inherent in these multigenerational family connections. Awake or asleep, the music is playing here, and it wouldn’t hurt to step out onto the dance floor for a while.

I received this book through GR’s First Reads program – thanks guys!

Mira Jacob co-authored Kenneth Cole’s autobio, wrote VH-1’s Pop-Up Video, and was a co-founder of Pete’s Reading Series, at Pete’s Candy Store, in Williamsburg, Brooklyn, a venue where authors have been reading their work to appreciative audiences for over a decade. She is married to academy award nominated documentarian, Jed Rothstein. They live, with their son, in Brooklyn.

The Eapen family are Syrian or Saint Thomas Christians. This Christian sect was news to me. The wiki entry is pretty interesting.