A Botanist’s Guide to Parties and Poisons by Kate Khavari   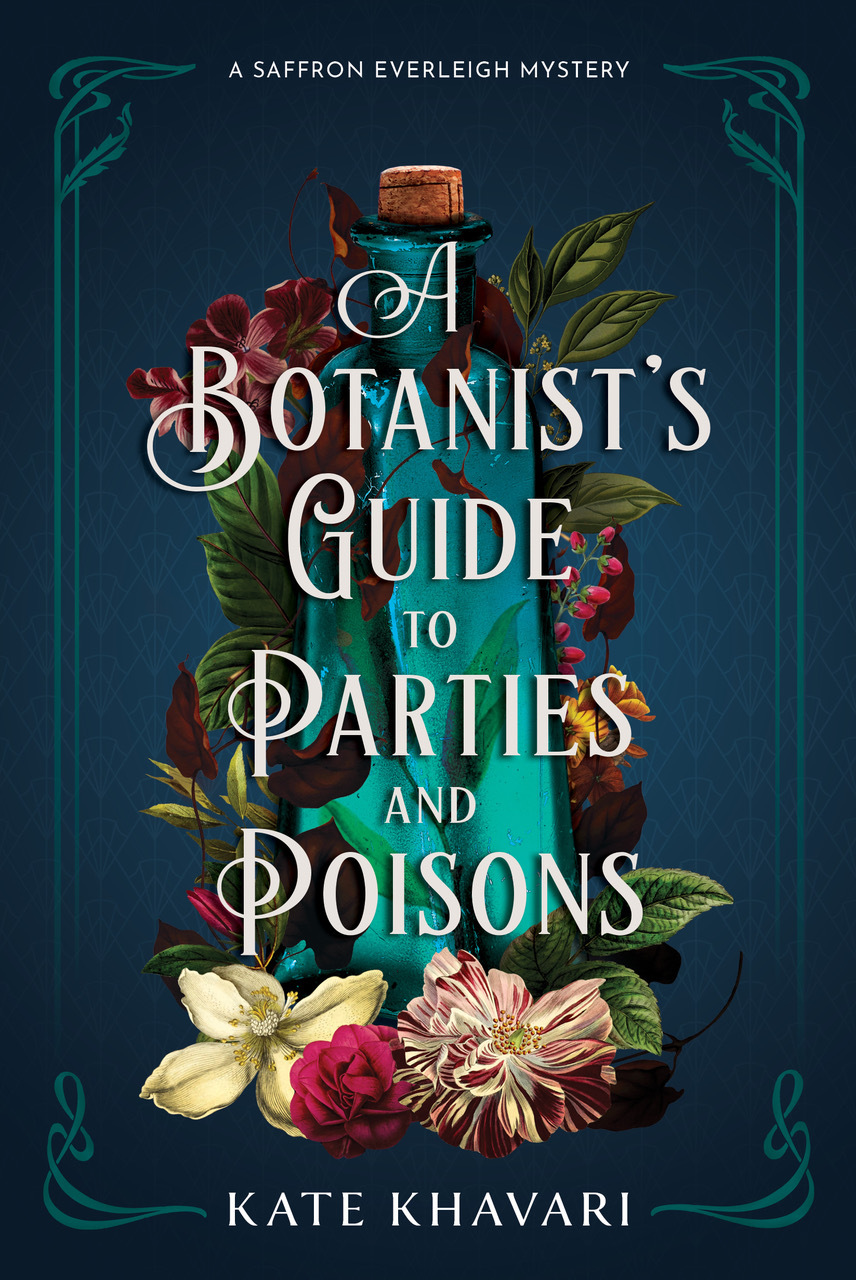 Dr. Henry glared at Blake and snatched the champagne glass from her hand. “I can pour my wife’s drink well enough, Blake.” He sloshed a dollop of liquid into her glass, refilling what he had just caused to splash out. He smiled obnoxiously at Mrs. Henry as she accepted the glass from him and took a drink.
With a cold smile to her husband, she said, “Thank you, darling.”
Then Mrs. Henry crumpled to the floor and lay quite still.

Saffron Everleigh is Dr Maxwell’s research assistant in London’s University College biology department, the only woman employed there and thus the subject of whispers. Science was making great strides in the post-war world, but 1923 was maybe not the best time to be a young woman trying to build a career in a heretofore male field. It helps that her father was a renowned biologist, but she must face serial sexism and some truly odious individuals in her quest to advance her studies and career. She finds herself facing a very different challenge, though.

…when I taught fifth grade American history, the story of how America developed felt like a story instead of a bunch of names and dates in a book. Writing about the ‘20’s feels the same- so many things were happening as a result of World War One that influenced everyday life. Technology and science were exploding with new discoveries, women were finding their new place in the world, millions were adjusting to horrible new realities of destroyed countries, bodies, and minds, and politics were ever-changing and charged with fear and hope. It’s a fascinating time to write about.

When we meet Saffron, she is enduring a department party at the grand home of a major donor, and meeting-cute the studly, witty, but mysterious Alexander Ashton, who will become her partner in this. Are those sparks igniting between the two of them or maybe just some spores floating in the air? Ashton is a biologist AND a microbiologist, a weird coincidence, as Khavali’s husband just happens to be a biologist AND a microbiologist too.

Kate Khavari – image from her site

At the party we are introduced via observations and overheard conversations to a series of characters and potential conflicts. We are let on, for many, to just what we should think of them.

Harry Snyder, Dr. Henry’s assistant, was seated on her other side. With small brown eyes behind wire-rimmed glasses, and thin lips that emphasized his large, impeccable teeth, he looked rather like a rodent. His demeanor, skittish and reticent, matched his mousy appearance.

Probably not setting Snyder up for a heroic role. The excitement of the party turns out to be the sudden collapse, noted in the introductory quote at the top, of Mrs Henry, wife to Lawrence Henry, the man slated to lead an upcoming expedition to the Amazon. Was it an allergic reaction? Young George Bailey might have a good idea just what caused Mrs Henry’s sudden shift from the vertical.

Saffron becomes concerned that the doltish police are settling on her boss as a possible suspect, deciding that since the authorities can be relied on to get everything wrong, it is up to her to find out what really happened at the party. Thankfully, she has considerable knowledge of things biological so the game is afoot, focusing on a particularly poisonous (and fictional) South American plant that her boss had discovered decades ago.

Everleigh keeps pushing to learn more, gaining help from Ashton in her pursuit. There seems to be a connection between the two, but the sexual tension between them seems to blossom, then wilt, blossom then wilt. We are kept in the dark, and thus guessing, about his role in all this. A prospect or a suspect? Is he a reliable partner, or is he using his appeal like that of a carnivorous cobra plant, not as transparent as he appears? This romantic element crops up from time to time in fawning descriptions of the guy.

The tale is of the cozy mystery sort, not much blood and violence on screen, although there is some very definite peril. The investigation is done by rank amateurs. Usually, there is someone with police expertise to advise, but not so much here. The fun feature of this particular book and, I expect, the planned series, is the introduction of botany as the root of all Saffron’s investigations. The possibilities are vast. We are led to suspect first this one and then that one, while maintaining a short list of likely subjects.

Khavari has some fun with names, (I love this stuff) seeding her cast with a veritable garden of botanical references, some obvious, like Saffron, Inspector Green, and Doctor Aster. Alexander Ashton must certainly reference the tree. I am sure there are more. She also has some fun of a different sort with other character names. Does Doctor Berking’s character reflect the etymology of his name? How about Eris Ermine, a femme fatale sort?

She also brings into the tale a consideration much in the world of this era. The long-lasting, personal impact on those involved in the front lines of World War I.

Much has been written about soldiers experiencing shell-shock, so I wanted to explore a lesser known avenue of symptoms and recovery. Alexander’s recovery from the Great War is complex and isn’t straightforward—few cases are—nor it is over. I will just say that many hours of research and consideration went into developing his symptoms and coping strategies… – from The Book Delight interview

Saffron has to deal with MeToo miseries from the more aggressive, and personal and institutional chauvinism all around, even among some thought more advanced. The toxic nature of academia politics is noted. No antidote is prescribed.

This book is hardly a yuck-fest, but there is still considerable humor and the occasional LOL.

Khavari, who grew up in Wichita, Kansas, keeps her characters on the move, and thus holds our interest. Saffron is a decent sort, working hard in multiple ways to produce good results. She is mostly honest, although suffering a bit from a moral disorder that afflicts so many investigators, a willingness to engage in criminal behavior on the grounds of the-ends-justify-the-means.

Ultimately, though, A Botanist’s Guide to Parties and Poisons (which was called Saffron Everleigh and the Lightning Vine earlier in its life. I have no inside intel on why this title was not used, but suspect it was a bit too close for comfort to the Harry Potter book titles format.) is a delightful sapling in the The Saffron Everleigh Mysteries series. Who knows? Maybe you will learn a few tricks for preparing that special drink for that special someone. The second volume, A Botanists’s Guide to Flowers and Fatality is expected to sprout in June 2023. It is something to look forward to. Once you begin spending time with Saffron Everleigh, you will not want to leave.

Her eyes fell on the name of a plant from south-central Mexico, brought back decades ago by Dr. Maxwell. The vine was a sickly yellow color and zigzagged around trees as it grew, clinging tightly to its host. Maxwell had named it the xolotl vine, after the Aztec god of death and lightning, since the growth pattern resembled a fork of lightning and the toxin in its leaves struck as quickly. Saffron had the feeling that Maxwell enjoyed the notorious reputation of his plant, occasionally still telling secondhand stories of people dropping to the ground immediately upon consumption.

I received an ARE of A Botanist’s Guide to Parties and Poisons from Crooked Lane Books in return for a fair review, and the secret to my special tea. Thanks, folks. And thanks to NetGalley for facilitating.

Interviews
—–The Book Delight – AUTHOR INTERVIEW: KATE AKHTAR-KHAVARI with Jean M. Roberts
—–Wichita Public Library – Read. Return. Repeat. S2E1: The Books are Back in Town – with Sara Dixon and Daniel Pewewardy – video lists as 43 minutes but the KK piece begins at 1:21 and goes to the 28 minute mark

Item of Interest from the author
—–In her site, Khavari provides A Botanical Index of all the plants referenced in the book